First-in-human compassionate use in 28 patients in North America and Europe offers some early insights. 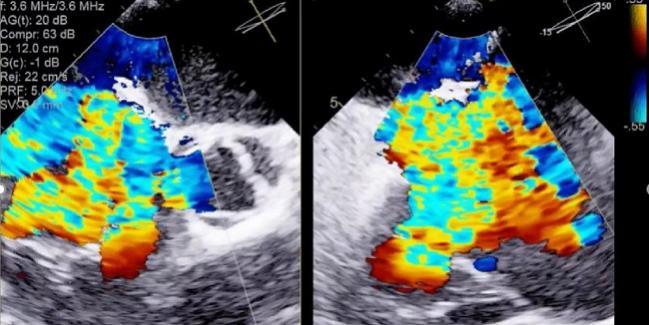 CHICAGO, IL—In experienced hands, compassionate use of the Pascal transcatheter valve repair system in patients with severe high-risk or inoperable tricuspid regurgitation (TR) can be safe and achieves a sustained reduction in TR at 30 days, a multicenter, first-in-human patient series suggests.

But experts reviewing the numbers cautioned that it’s too early to know what to make of the TR reduction or to gauge just how well these complex procedures would roll out in the real world.

Neil Fam, MD (University of Toronto, Canada), presented these early results as part of a late-breaking clinical science session at TVT 2019 last week. In all, 28 patients were treated at six centers—one in Toronto, one in Chicago, and four in Germany. The device being tested, Pascal (Edwards Lifesciences), was pioneered for mitral valve regurgitation and involves a central spacer intended to fill the regurgitant orifice area plus broad, contoured paddles designed to reduce leaflet stress. Clasps underneath the paddles, which grasp the tricuspid valve leaflets, can be maneuvered independently in order to “fine-tune” the leaflet position, Fam said.

As Fam showed here, patients in this series had a mean age of 79 years, slightly more than half were female, all were in NYHA class III or IV heart failure and all had a TR severity > 3+. Procedural success, defined as implantation of at least one device to achieve a postprocedural TR grade ≤ 2+, with no mortality or conversion to surgery, was attained in 26 of the 28 patients; one patient died of terminal heart failure and the other of presumed cardiac causes, although neither death was deemed related to the device or the procedure. The mean number of devices implanted was 1.4, and independent leaflet grasping—a hallmark of this device—was used in 90% of cases. There were two cases of single-leaflet device attachment (SLDA), where only one of the two leaflets targeted remained clamped in the device. Mean procedure time was 134 minutes.

“In this first-in-human experience, the Pascal transcatheter valve repair system demonstrated high procedural success, acceptable safety, and significant clinical improvement in patients with challenging tricuspid anatomy and severe TR,” Fam concluded, noting that the study had important limitations, including the fact that it was small and observational and that clinical and echocardiographic results were site-reported.

“Prospective studies with long-term follow-up are needed to confirm these initial promising results and further define the impact of the Pascal repair system on clinical outcomes in patients with tricuspid regurgitation,” he noted.

In a discussion following Fam’s presentation, moderators and panelists raised some questions.

“I’m concerned about the lack of an echo core lab,” said Gregg Stone, MD (NewYork-Presbyterian/Columbia University Irving Medical Center, New York, NY), who co-moderated the session. “I just don’t know what the success rate of less than 2+ means without that. . . . I hope you can get an echo core lab—it will be really important to see, quantitatively, what happened to the degree of TR.”

That said, he continued, “these are very encouraging outcomes and I congratulate you on the success rates.”

Fam, to TCTMD, confirmed that an echo core lab is planned for “subsequent prospective studies.”

The panel also zeroed in on the two cases of SLDA, a rare but closely watched phenomenon given concerns for embolization and, in some cases, the need for surgical intervention.

Fam confirmed that both cases were closely examined and the first was believed to be a learning-curve issue and the second was a patient with a very retracted and tethered septal leaflet. “This device is larger than the MitraClip, so we had to learn how to image it properly and make sure we had good leaflet insertion. Since those lessons were learned, we didn’t have that type of event.”

Co-moderator Martin Leon, MD (NewYork-Presbyterian/Columbia University Irving Medical Center), pointed to the fact that 90% of cases involved single-leaflet grasping—that is, clasping one leaflet then another. “So the independence of the Pascal leaflet grasping may be an advantage in the tricuspids, and I guess the longer and wider arms may be an advantage, too, because the gap widths here are much different than on the mitral side. But I’ve also heard that because of the chordal anatomy that sometimes the longer arms can not be your friend if you put in multiple devices, and there may be a need for a smaller, shorter device as well to get complete repair of the tricuspid.”

“Excellent point,” Fam replied. “I didn’t mention there were two nonimplants and one of them was for exactly this issue. With very dense chordal anatomy with the first generation of this device, you may not be able to get under the free edge of the leaflet and you’re locked out. This [Pascal] implant is now available in two sizes, a wider one and a narrower one, which holds a lot of promise.”

I think these are encouraging results for grasping or clipping of tricuspid valve leaflets, but [ought] to remain in the hands of experts for the time being. Bernard Prendergast

Stone also made the point that early efforts using the smaller MitraClip in the tricuspid space have suggested that multiple clips are often needed, whereas in this series the mean was 1.4 Pascal devices. “Do you think you might need more?” Stone asked. “Could you get the TR down even lower?”

“I think the answer is yes,” said Fam. “The experience is continuing. The more torrential the TR, the more implants you need. So probably closer to two would be appropriate for some of the patients we’re taking on. The maximum number [in this early series] was three.”

Commenting on the study for TCTMD, Bernard Prendergast, MD (St. Thomas’ Hospital, London, England), pointed out that this is only one of a range of novel devices targeting the tricuspid after proving safety and feasibility in the mitral valve. At EuroPCR last month, attendees saw early results for the TriClip (Abbott), a modified version of the MitraClip NT.

“We’re learning that edge-to-edge repair of tricuspid valves is feasible; the data are very promising. But we need to remember that they are being performed by highly specialized, highly experienced operators to get these results and that doesn’t mean it will translate into everyday practice in every center. These are long and difficult procedures,” he said. “I think these are encouraging results for grasping or clipping of tricuspid valve leaflets, but [ought] to remain in the hands of experts for the time being.”

Clips and Rings for Tricuspid Regurgitation: Early Data Speak to Progress and Challenges