The results show a dramatic decrease in angina frequency that was sustained at 1 year, researchers reported at SCAI. 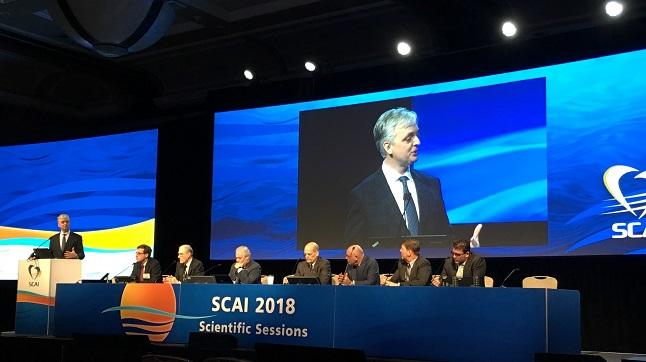 SAN DIEGO, CA—A contemporary trial of CTO PCI with a zotarolimus-eluting stent (ZES) has shown good late-term outcomes, with improvements in health status and quality of life (QoL) at 1 year.

“It’s notable that these results are presently under review by the Food and Drug Administration for a potential expanded indication for this drug eluting stent,” said David Kandzari, MD (Piedmont Heart Institute, Atlanta, GA), in a press conference prior to the presentation today at the Society for Cardiovascular Angiography and Interventions 2018 Scientific Sessions.

Data from the study, known as PERSPECTIVE, show a dramatic and sustained decrease in daily or weekly angina scores from 40% at baseline to 2% by 1 year. Kandzari noted that the improvements in health status were seen in both observer- and patient-reported outcomes and that the study was intended to be as representative as possible of an all-comers population.

The findings differ from those of the recent DECISION-CTO trial, the first and only randomized trial of CTO revascularization versus optimal medical therapy (OMT) in stable patients. Not only did the overall results prove to be a disappointment for supporters of CTO PCI when they showed similar MACE rates at 3 years regardless of whether patients received OMT alone or in addition to CTO PCI (19.6% vs. 20.6%; P = 0.008 for noninferiority), there also was no difference in QoL measures, including Seattle Angina Questionnaire (SAQ) scores. However, in the EURO CTO trial, which was designed to look at QoL, angina frequency at 12 months was improved with CTO PCI compared with OMT (P = 0.009) and Canadian Cardiovascular Society angina scores also were better (P < 0.001).

PERSPECTIVE was a single-center study of approximately 500 consecutive patients who underwent attempted CTO revascularization. The study included two cohorts: a retrospective group of 250 patients who were consented following their procedure and a prospectively treated group of 250 patients. Of the latter group, 183 patients were treated with a ZES (Resolute, Medtronic) and formed the basis of the analysis presented here at SCAI.

In an attempt to conform as closely as possible to a real-world CTO population, there were no restrictions on patient enrollment with regard to lesion length or treatment strategy (antegrade, retrograde, hybrid, atherectomy, etc), LVEF, recent MI, or renal function, Kandzari noted. Approximately 35% had diabetes, 33% had prior MI, 79% had class III/IV angina, and 27% had prior bypass surgery. The right coronary artery was the most common site of lesions, with lesion lengths averaging 92.6 mm and approximately 80% of patients having occlusion lengths > 20 mm.

At 1 year, the rate of clinically driven TLR was low (1.7%), as was the rate of cardiac death (1.7%). Overall mortality was 2.9%. MACE events as defined by the protocol occurred in 6.9%. In addition to the decreases in angina frequency, mean SAQ scores were significantly increased from baseline at 1 year in all domains (physical limitation, angina frequency, QoL, and summary score).

Following the presentation, panelist Nigel Jepson, MBBS (Prince of Wales Hospital, Randwick, Australia), asked how consent was handled in the study given the high risk.

Kandzari said his institution has a specific consent form for CTO patients that outlines the risk. Additionally, he noted that the study operators in PERSPECTIVE worked in teams that allow for combined review of strategy and approach with each case.

“The majority of the procedures were done with two interventionalists, and I think that yields a lot of the advantage with regard to having an extra set of hands and an extra mind in terms of when to proceed and when to hold back,” he noted.

2 years ago
Most heart disease is caused by multiple nutritional deficiencies and - like all other nutritional deficiency diseases - it can be reversed by supplying the missing nutrient(s). Dr. Thomas E. Levy has been a cardiologist for over 30 years. In his book, Stop America’s #1 Killer, he lists 33 nutrients “…for optimizing the ability of the artery to regenerate itself and reverse any existing atherosclerosis…the typical diet does not even come close to supplying enough of these essential vitamins, minerals and nutrients.” As someone with a family history of heart disease, I have been taking this list of nutrients since 2000. I am now 63 years old and recently had an MRI. The doctor declared, “Ray, your arteries are clean as a whistle!” Needless to say, I am a big fan of Dr. Levy and am dedicated to disseminating this important information; so, I email this list - along with the proper dosages - to anyone who requests it. Just email me at: rayellis@reagan.com.

On the Frontier of CTO PCI for STEMI Patients: Answers Lead to More Questions in EXPLORE