The small but randomized controlled trial may help reassure that certain echocardiographic features do indeed help pinpoint patients who will benefit. 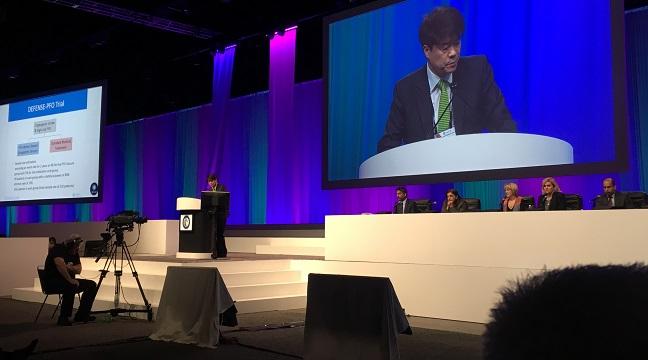 ORLANDO, FL—A new small but randomized controlled trial of PFO closure in cryptogenic stroke should help reassure that certain morphological features do indeed help pinpoint patients who would benefit from a device versus medical therapy.

DEFENSE-PFO took its cue from early studies suggesting that PFOs more likely to be linked to stroke are those with large shunts and/or with atrial septal aneurysm or hypermobile septum. As Song noted during his presentation, early studies including CLOSURE I, PC, and RESPECT were negative, but subset analyses pointed to a signal of benefit in patients with morphological features of high-risk PFO. Only after US Food and Drug Administration approval of the Amplatzer PFO Occluder (Abbott), followed by results from the positive REDUCE, CLOSE, and RESPECT-extension studies, did expert opinion on PFO closure swing “from a negative to a positive outlook,” he observed.

Indeed, DEFENSE-PFO was originally designed to be a 210-patient trial, with subjects randomized equally to PFO closure or medical therapy at the treating physician’s discretion. Following the release of positive study outcomes, however, investigators elected to halt enrollment in DEFENSE-PFO on the grounds that medical therapy would be unethical for these high-risk patients. Ultimately the study included just 60 patients in each arm, all of whom had high-risk PFO characteristics on echocardiography.

After a median follow-up of 2.8 years, no primary endpoint events (stroke, vascular death or TIMI-defined major bleeding) had occurred in any of the patients treated with the Amplatzer PFO occluder, whereas six such events had occurred in the medical therapy group. Those events included five ischemic strokes, one hemorrhagic stroke, one TIA, and two TIMI major bleeds. Of note, dual antiplatelet therapy was the most common choice in that medical arm at 30 days, 6 months, and 12 months, with warfarin the choice in approximately one-quarter of the patients.

“This is a very interesting data set for a very high-risk population, particularly anatomically high-risk PFO patients,” panelist John J. Warner, MD (UT Southwestern, Dallas, TX), observed following Song’s presentation. One issue, he pointed out, is the heterogenous medical therapy group, with a not-insubstantial proportion of patients receiving single antiplatelet therapy only (ranging from 17% at 30 days to 27% at 12 months). “This is a small study, but if this is going to go to the next step where you use anatomic evaluation to make decisions, there may need to be a larger randomized comparison, perhaps with those who were receiving warfarin or perhaps more aggressive antiplatelet therapy,” Warner commented.

Song agreed saying “appropriate medication should be evaluated by other investigations.”

Also on the panel, Gregg Stone, MD (Columbia University Medical Center, New York, NY), summed up the findings by saying: “I think that this is a small study—underpowered, prematurely terminated, [with] a lot of crossovers in both arms, but fortunately it was still positive.”

He also identified what he saw as a key flaw in the study design. “Unfortunately, you cannot draw any conclusions from high- versus low-risk morphologic criteria in this study, because you didn't have a randomized arm of low-morphologic risk PFO,” Stone said. “Maybe you would have found the exact same thing, maybe you wouldn't. I personally tend to believe you and share your opinion [that high-risk morphologic features can predict who will benefit], but this study does not support morphologic-based decision-making for which PFOs to close.”

Speaking at a press conference following the late-breaking session, Song addressed Stone’s critique, noting: “The previous publications, the big trials, they did subgroup analyses and in those analyses, they proved that the risk is determined by size of the shunt, and they've already proved that the low-risk of patients, with low amounts of shunt, device [closure] does not impact results.”

By contrast, in those studies, “in the patients with the largest shunts, closure was effective,” he added.

The decision to not include a low-risk arm in DEFENSE-PFO was thus made on the basis that to treat these patients with closure is not supported by the evidence and potentially unethical, he implied. “We cannot apply the same procedure for all patients.”

Of note, high-risk PFO, by morphological characteristics, substantially reduces the number of patients with PFO who could potentially benefit from closure. In the trial, PFO was identified in approximately 29% of patients screened—similar to that seen in other series. Of that 29%, however, only 39% were found to have one or more high-risk characteristics.