Experts pointed out that the study lacked the kind of formalized exercise prescription typical of rehab programs in the US, but remained enthusiastic. 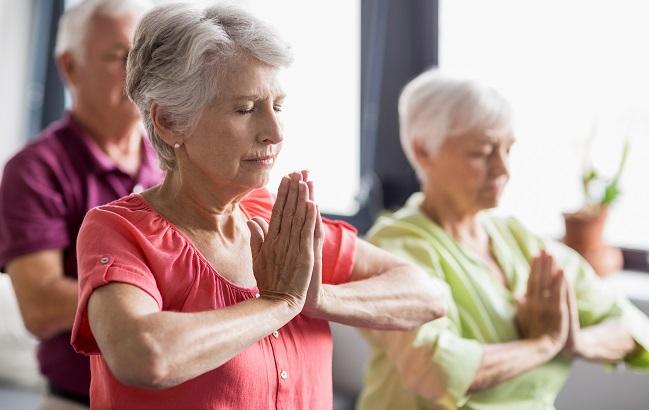 CHICAGO, IL—A yoga-based rehabilitation program following acute MI, called Yoga-CaRe, is as safe as a conventional program and feasible in an Indian population, according to new randomized data.

The problems with cardiac rehabilitation programs are that they are expensive and require the resources of a multidisciplinary team, Dorairaj Prabhakaran, MD, DM (Center for Chronic Disease Control, New Delhi, India), who presented the study in a late-breaking science session today at the American Heart Association 2018 Scientific Sessions, told TCTMD. “Whereas we are saying that we just have one trained yoga instructor and it reduces the cost. In fact, even in terms of space, all you need is a small room with a yoga mat. We don't require more than that. [Also], it's culturally acceptable, and it's become much more popular.”

For the trial, the researchers randomized 3,959 acute MI patients from 24 Indian centers to 14 weeks of either Yoga-CaRe—which involved 13 sessions on lifestyle, meditation and breathing exercises, and yoga postures—or enhanced standard care consisting of three educational sessions and printed leaflets delivered by a nurse or other member of the cardiac care team. The yoga postures used in the study group were specifically chosen so as not to increase the participants’ heart rates to dangerous levels, Prabhakaran specified.

In the intention-to-treat (ITT) analysis, patients who received Yoga-CaRe had numerically fewer primary endpoint events (death, nonfatal MI, nonfatal stroke, or emergency cardiovascular hospitalization) than controls at 42-month follow-up, but the difference was not significant.

However, in the per-protocol analysis—with completers defined as the 1,059 participants who attended at least 10 Yoga-CaRe sessions—Yoga-CaRe resulted in almost half as many primary endpoint events at 42 months (HR 0.54; 95% CI 0.38-0.76).

The secondary endpoint of self-rated quality of life, as measured by mean change in the EQ-5D VAS score, was higher for patients in the Yoga-CaRe group than controls at 3 months (10.7 vs 9.2; P = 0.002). Yoga-CaRe was also associated with a greater rate of patient return to preinfarct daily activities (P < 0.001) and achieving no more than six health states (P = 0.04) by 3 months.

Transport to the session was the biggest barrier for participants to complete Yoga-CaRe, he said but noted that this is typical of any cardiac rehab program.

Now that this protocol has been proven safe, Prabhakaran said he would like to see it investigated following other conditions like heart failure. “Heart failure is growing, and in India it is said that 50% of people die by 5 years,” he said. “Initially we didn't look at heart failure because we were worried about the safety of yoga in this group. Now that we are demonstrating that it is safe and feasible, we will extend it to heart failure.” Yoga might also be useful for cancer rehabilitation and avoidance of injury in elderly patients, he added.

Yoga as an Adjunct, for Now

Donna Arnett, MSPH, PhD (University of Kentucky College of Public Health, Lexington), told TCTMD that overall, the US healthcare system has “to do a better job of getting our patients into cardiac rehab. It's a very strong evidence-based program to prevent second heart attacks.”

While the study is intriguing and many others have shown the benefits of yoga in terms of stress reduction, she said, “what I think we would need to see here before we could make that leap into [a yoga-based cardiac rehab] is a direct comparison between a yoga-based practice of cardiac rehab versus our standard-of-care cardiac rehab that we have tested and we have good evidence for. If we did a randomized trial where we put people into each of those and then compared them and there was no difference in efficacy, then I could see this as potentially another solution. Maybe it is a solution that would help increase rates of adoption of cardiac rehab post-MI, because it may be less threatening to do yoga then exercise.”

Exercise physiologist Paula Seffens, PhD (University of North Georgia, Gainesville), also noted the lack of a physical exercise component in the control group arm, telling TCTMD that “this was not a head-to-head comparison.” Future studies should employ a better-matched design, so that if there was any improvement seen in the yoga arm over traditional exercise “we would know that they were getting equal amounts of exercise [and] then it's something beyond just exercise that's at work here,” she commented.

Until there is enough scientific evidence, yoga will remain an adjunct therapy for cardiac patients, Seffens said. But for those who want to add it, and many in her practice have chosen to do so for various reasons, the different components of yoga can have quality-of-life benefits. “We probably should be teaching them routinely to be taking slow deep breaths and doing some pranayama type exercises, to encourage some meditation and periods of relaxation as part of their new routine,” she suggested. However, “how we actually put that into cardiac rehab and make it standard of care, I think we just have to be careful about going about it in ways that are well received by the medical community.”

Purvi Parwani, MD (Loma Linda University, CA), who grew up in India watching her parents do yoga and today has a regular practice herself, echoed Seffens’ enthusiasm for yoga in cardiac rehab. Even though this trial did not show a benefit of yoga over standard care, importantly yoga didn’t do worse, she told TCTMD. “So one can say that now you can actually tell your patients that they can do yoga and actually could have similar impact on their overall healing post-MI as much as probably any other exercise.”

1 year ago
Yeah, yoga is very good for our health. It increases flexibility and do our muscles strong. It protects from cardio attack and reduces weight. My parents recently started their yoga classes, they bought all their yoga accessories from https://www.reecoupons.com/view/mixxmix, after attending yoga classes now they feel fresh and active.

CVD Prevention and Control Remains a Challenge in India