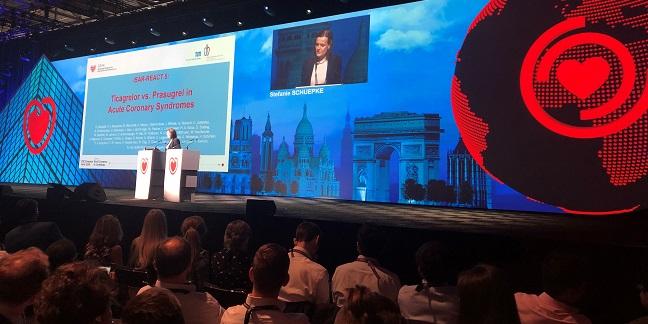 PARIS, France—Investigators designing ISAR-REACT 5, the first head-to-head trial of ticagrelor and prasugrel in ACS patients heading for revascularization, expected to prove that ticagrelor is superior in this setting. They couldn’t have been more wrong.

“We were surprised,” lead investigator Stefanie Schüpke, MD (Deutsches Herzzentrum, Munich, Germany), told TCTMD during a morning press conference. “We started the trial and assumed that ticagrelor would be superior, and we found just the opposite.”

At 1 year, 9.3% of patients randomized to ticagrelor had had an MI, stroke, or died, as compared with 6.9% of the patients randomized to prasugrel, a statistically significant difference (P = 0.006). Importantly, said Schüpke, who presented the results here at the European Society of Cardiology Congress 2019, the benefit of prasugrel in reducing ischemic events did not come at the cost of increased bleeds, which were numerically higher among the ticagrelor-treated patients.

Just over 4,000 patients were randomized in ISAR-REACT 5: 2012 to ticagrelor and 2006 to prasugrel. Of note, delivery strategies differed depending on patient presentation and drug-specific, guideline-recommended care. For STEMI patients, study drugs were initiated at the time of randomization, whereas in unstable angina and non-STEMI, ticagrelor was given as a loading dose at the time of randomization and prasugrel was given at the time of angiography, with both arms receiving maintenance doses following PCI.

Nearly 85% of patients were ultimately treated with PCI.

After 12 months, the primary endpoint of MI, stroke, or death was significantly higher in the ticagrelor-treated patients, than in the prasugrel-treated patients, with a hazard ratio of 1.36 (95% CI 1.09-1.70). For each of the individual endpoints, event rates were similar or numerically tilted in favor of prasugrel—a finding that Schüpke stressed was only hypothesis-generating.

Primary and Secondary Endpoints in ISAR-REACT 5

Importantly, the reduction in ischemic events did not occur at the expense of bleeding: rates of BARC 3-5 bleeding, the primary safety endpoint, were 5.4% and 4.8% for ticagrelor and prasugrel, respectively.

“The ISAR-REACT 5 trial supports a prasugrel-based strategy without routine pretreatment in NSTE ACS as the first-line antiplatelet therapy for ACS patients,” Schüpke concluded in her press conference presentation.

But even now, said Schüpke, the findings will have an impact on her practice.

“I think this is really a clear result, and also very robust,” she emphasized. Importantly, the results were driven by MI, and these were “not just type 2 MIs, they were type 1, spontaneous MIs,” Schüpke continued. What’s more, subsequent STEMIs were reduced with prasugrel—not just “enzyme leaks”—as was the reduction in urgent revascularizations.

“For me, the results are clear,” Schüpke said. “Prasugrel has shown superior efficacy over ticagrelor, in an important way, and it did so without increasing the risk of bleeding,” she stressed.

Commenting on the findings during the press conference, as well as in an interview with TCTMD, Roxana Mehran, MD (Icahn School of Medicine at Mount Sinai, New York, NY),  raised a number of concerns, including the trial’s open-label design, the lack of tight oversight for drug adherence and discontinuation, patients lost to follow-up for the bleeding analyses, the difficulty of teasing out risk/benefit in patients with different severity of ACS, and the different drug delivery strategies.

“We need so much more of this type of study, so let me begin by saying a huge congratulations to the investigators,” Mehran told TCTMD. “These head-to-head studies are so important so we can treat our patients with the best of the best, but they are never funded. This is a call out to the NIH, to governments, to not-for-profit organizations to fund these types of studies because when they are underfunded, they are going to be open label and there’s going to be problems with follow-up. There’s also perception bias that comes in when it’s not a blinded study.”

The ISAR REACT 5 investigators, Mehran continued, “did the best they could with the funding they had, but I think they tried to answer too many questions with one study. The population is mixed, the loading was different, and the prasugrel patients in some cases were given a [nonstandard maintenance dose],” she added. “This is very provocative, very important. It’s a landmark study, but it needs to be replicated and validated.”

Gilles Montalescot, MD, PhD (Centre Hospitalier Universitaire Pitié-Salpêtrière, Paris, France), the study’s discussant also called it a “landmark trial” but raised many of the same concerns as Mehran regarding trial design “flaws.” He also praised its strengths, though, including its academic rigor and pragmatic design. Ultimately, he concluded, ISAR-REACT 5 is “a very informative trial” that will yet yield additional insights as subgroup findings are explored.

“What is ISAR-REACT 5?” Montalescot asked, concluding: “ISAR-REACT 5 is a landmark study, which is going to impact our practice and the next set of guidelines to come next year, in 2020.”