The analysis lacks the nuance, one expert says, to tease out exactly which patients with pre-interventional PH will fare poorly. 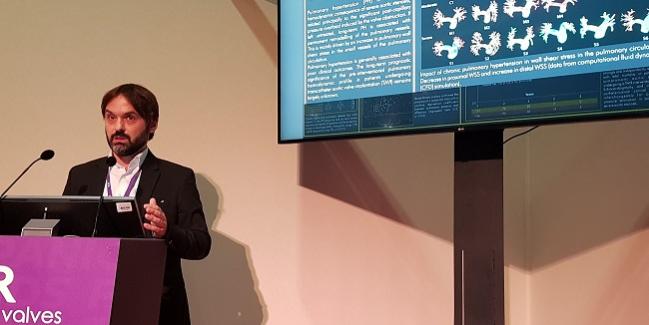 After a mean follow-up of 31 months, patients with PH, which was defined as a mean pulmonary arterial pressure (mPAP) > 25 mm Hg, had a 60% increased risk of all-cause mortality compared with those without PH, reported Dionysios Adamopoulos, MD (Geneva University Hospital, Switzerland), last week at PCR London Valves 2019.

“Pulmonary hypertension is very common in patients with aortic stenosis,” said Adamopoulos. Pressure overload of the left ventricle leads to pulmonary vascular remodeling, diastolic dysfunction, and increasing filling pressures in the left atrium, which is then translated to the pulmonary circulation, he said. Past studies have shown that PH is associated with poor clinical outcomes in the general population, but the impact of pre-interventional PH in patients undergoing TAVR is not fully known, said Adamopoulos.

The single-center study included 372 patients undergoing TAVR for severe symptomatic aortic stenosis (mean age 83 years), including 298 who were also evaluated with baseline right heart catheterization. Of these, 56% had PH. Patients with PH were more likely to have chronic obstructive pulmonary disease (22.6% vs 11.5%; P = 0.01), have worse heart failure symptoms (77.7% in NYHA class III/IV heart failure vs 69% of those without PH; P = 0.01), and have a lower left ventricular ejection fraction at discharge (60% vs 62%; P < 0.001).

Despite the increased risk of mortality among patients with pre-interventional PH, Adamopoulos said the findings have had little impact on their clinical practice.

“For the moment, no, because we can’t really treat them any differently,” he answered in response to the question from session co-moderator Rashmi Yadav, MBBS, PhD (Royal Brompton & Harefield NHS Foundation Trust, London, England). “Treatment of these patients is to change the pressure overload in the left ventricle and try to decrease the filling pressures, hoping that the normalization of the left ventricle pressure will reverse the diastolic dysfunction.”

In their study, Adamopoulos and colleagues have not yet looked at whether the procedure did in fact reverse diastolic dysfunction, but co-moderator Jane Hancock, MD, PhD (St. Thomas’ Hospital, London, England), said such an analysis could be important for identifying PH patients with the best response to TAVR and those in whom the procedure might be futile.

What About Severe PH?

To TCTMD, Yadav said the binary definition of PH used in the analysis is one of the study’s limitations, noting that while PH is defined as mPAP > 25 mm Hg, that is a relatively low bar. For those with PH, mild, moderate, and severe disease is typically classified as mPAP 25 to 40, 41 to 55, and > 55 mm Hg, respectively, and many TAVR patients would have some degree of increased pulmonary pressure, she said.

“[We’d like to know] what happens to patients with severe pulmonary hypertension because patients with mild PH we would treat anyway,” she said. “It’s the severe group that we would sometimes say no to because we know that they have poor outcomes. They don’t survive; they might die on the table. The real money is knowing what happens specifically to those with severe PH.”

Paul T.L. Chiam, MBBS (Mount Elizabeth Medical Center, Singapore), who moderated the session along with Yadav and Hancock, said the analysis is also confounded by the high prevalence of COPD in their population. These patients, whether they undergo TAVR or not, have poor long-term outcomes. For the patient with PH resulting from left-sided valvular disease, such as aortic stenosis, TAVR will also result in a decrease in pulmonary pressure, particularly in those with mild PH. Like Yadav, Chiam told TCTMD the analysis would be improved by studying which patients with PH drove the increase in mortality after TAVR, noting that the elevated risk was most likely skewed by those with moderate-to-severe PH.

Mild elevations in pulmonary pressure before TAVR are unlikely to have a large clinical impact, said Chiam.

Many ASCVD Patients Skimp on CV Meds Due to Costs: US Survey