One expert also questions the need for pre-ablation transesophageal echocardiogram given that only one patient reported a thrombus. 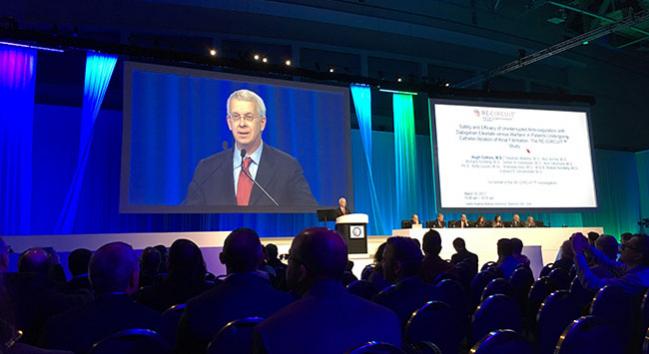 WASHINGTON, DC—A-fib patients undergoing catheter ablation have fewer major periprocedural bleeding events when treated with uninterrupted dabigatran (Pradaxa; Boehringer Ingelheim) compared with warfarin, according to new randomized data from the RE-CIRCUIT trial presented here at the American College of Cardiology (ACC) 2017 Scientific Session. These results should officially put an end to lingering worries over use of the non-vitamin K oral anticoagulant (NOAC) in this population, researchers say.

Five years ago, a study by Lakkireddy et al. was the first to suggest that periprocedural dabigatran might be associated with increased bleeding risk among ablation patients, leading some electrophysiologists to switch patients off the NOAC at least for the duration of the procedure.

“That will all stop now because people will realize that there's absolutely no reason to do that,” electrophysiologist Suneet Mittal, MD (Valley Hospital Health System, Ridgewood, NJ), who was not involved in the study, told TCTMD.

Calkins and colleagues randomized 678 A-fib patients undergoing ablation to uninterrupted dabigatran 150 mg twice daily or warfarin and followed them for 8 weeks. Those on dabigatran reported significantly fewer major bleeding events than patients on warfarin (1.6% vs 6.9%; P = 0.0009), representing a 77.2% relative risk reduction with the NOAC.

There were no instances of death, stroke, or systemic embolism in any patients, though there was one TIA in the warfarin arm. Patients on warfarin tended to have more complications like pericardial tamponade and groin hematoma. Minor bleeding events were similar between the groups.

The results were simultaneously published in the New England Journal of Medicine.

Discussing the study after its presentation, panelist William Stevenson, MD (Brigham and Women’s Hospital, Boston, MA), said RE-CIRCUIT tackles a subject “we’ve been struggling with” and “clearly refutes” the concerns over continuous therapy in this setting.

However, he questioned the extra complications observed in the warfarin arm and wondered if they were not due specifically to the anticoagulation therapy but rather to the management of the access site. This “suggests to me that there were a few more holes poked in the atrial myocardium in the warfarin group than in the dabigatran group,” Stevenson said.

Calkins postulated that “it may be that you poke a hole, but if you are on a more forgiving anticoagulant like dabigatran, the bleed doesn’t persist and doesn't turn into tamponade. Whereas you poke a hole with warfarin, it turns into a bigger problem.”

Mittal also picked up on the greater rate of complications within the warfarin arm and called it a “statistical quirk.” Looking back on his experience performing ablations in patients on warfarin, “I don't recall complication rates that high, so I think the magnitude of benefit [of dabigatran] is somehow exaggerated,” he said. But “what they report with dabigatran is in keeping with our experience—for years our lab hasn’t been doing any interruption of any NOAC.”

For the most part, Mittal said his patients on NOACs are typically treated with apixaban (Eliquis, Bristol-Myers Squibb) and rivaroxaban (Xarelto, Janssen Pharmaceuticals), but in the “about 10%” who are on dabigatran, they do not get switched to another drug prior to an ablation, he said.

RE-CIRCUIT will “definitely” affect practice, Calkins said. “For many reasons this is a far better strategy, and then having an antidote that you can give and can completely shut it down in the cases of really uncontrolled bleeding to me and to any patient would be very reassuring, and I think would really support this approach.”

However, the availability of a reversal agent isn’t as big of a deal to Mittal. If it was, doctors would “only be using dabigatran to begin with. But I don’t know that that's factored into a huge concern for patients,” he said, citing additional data on increased GI discomfort with dabigatran. “I don't think I'm going to take a patient on rivaroxaban and switch them to dabigatran because RE-CIRCUIT is out.”

On another note, the most interesting aspect of this study had nothing to do with bleeding, Mittal said. “There’s been a debate in the EP community about whether patients with atrial fibrillation need a transesophageal echocardiogram (TEE) prior to catheter ablation procedures,” he explained, citing recent data suggesting that nearly 5% of patients would have a thrombus on a TEE done prior to a procedure.

“We for years have not done any TEEs on anybody because we feel that if a patient is therapeutically anticoagulated, the risk of thrombus is vanishingly low,” Mittal said.

Part of the RE-CIRCUIT protocol was a mandatory TEE done pre-ablation and only one patient overall reported a thrombus. This “raises the question that if you are running this protocol where you have high adherence to dabigatran and the [time in therapeutic range] with warfarin is high, then you probably get to the point where that test is no longer needed,” he commented, adding that he hopes people will discuss this further.