PCI indication, stent type, and choice of P2Y12 inhibitor did not have a significant impact on the benefits of dabigatran-based dual therapy. 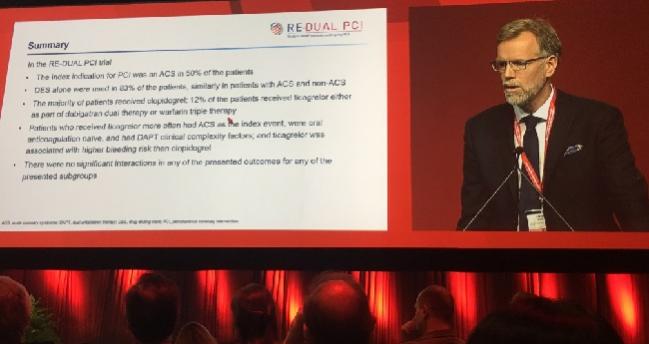 In RE-DUAL PCI, investigators enrolled 2,725 patients with nonvalvular A-fib who had recently undergone PCI and randomized them into three groups:

Choice of P2Y12 inhibitor was left to the discretion of treating physicians, and most patients received clopidogrel; 12% received ticagrelor (Brilinta; AstraZeneca). In the triple therapy arm, aspirin was used for 1 month following BMS implantation and 3 months following DES implantation.

As reported in August, the risk of ISTH major or clinically nonmajor bleeding (the primary endpoint) was reduced with dabigatran-based dual therapy versus triple therapy, both with the lower dose of dabigatran (HR 0.52; 95% CI 0.42-0.63) and the higher dose (HR 0.72; 95% CI 0.58-0.88). Those differences met criteria for noninferiority and superiority.

The indication for the index PCI was ACS in about half of patients. There were no significant interactions between PCI indication and treatment effects in terms of the primary bleeding outcome, ISTH major bleeding alone, TIMI major bleeding, or any efficacy outcomes (P = NS for all interaction tests).

In the trial, DES were used in 83% of patients overall. As in the subgroup defined by PCI indication, there were no significant interactions seen between stent type and treatment effects for bleeding or efficacy outcomes.

When looking at the subgroup defined by choice of P2Y12 inhibitor, the minority of patients who received ticagrelor were more likely to have ACS, to be anticoagulation-naive, and to have dual antiplatelet therapy clinical complexity factors than those who received clopidogrel. Rates of bleeding were higher in patients who received ticagrelor, although there were no significant interactions between P2Y12 inhibitor type and effects of treatment on bleeding and efficacy outcomes.

Serving as a discussant following Oldgren’s presentation, Mark Hlatky, MD (Stanford University School of Medicine, CA), said the RE-DUAL PCI findings “were generally consistent across the three subgroups that they looked at today.”

Hlatky noted that researchers look at subgroups to evaluate variation in relative risk reductions, in the absolute degree of benefit or risk, and in the balance of risk and benefit. There was no evidence of variation in any of those three areas for the RE-DUAL PCI trial, he indicated.

He said the balance of risk and benefit might differ in patients who have high bleeding risk and low or average stroke/MI risk—or vice versa. But, he noted, because stroke and bleeding share many risk factors, risks of those outcomes tend to go up or down together.

“I do think that subgroups are worth examining, but don’t overinterpret the findings,” Hlatky said.

Continuing NOACs During Device Surgery Does Not Reduce Pocket Hematoma