On the whole, experts believe REPRISE III carves out a role for the repositionable Lotus valve, even if few wanted to publicly pick a favorite. 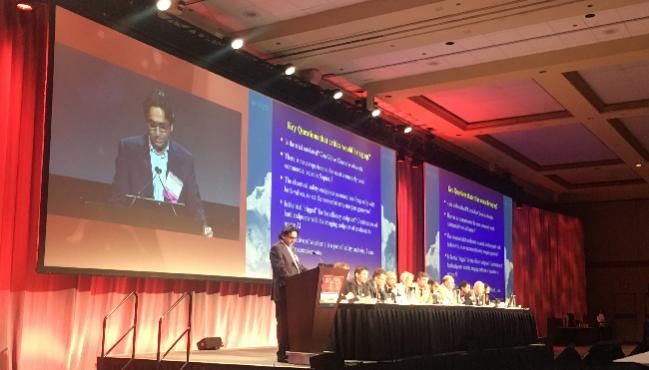 CHICAGO, IL—Having had a month to digest the REPRISE III results, leaders in the field of transcatheter aortic valve implantation appear to be enthusiastic about the findings and content to view certain unexpected outcomes as the play of chance, or as something that will fade away as experience grows with the Lotus transcatheter valve system (Boston Scientific).

As reported by TCTMD at EuroPCR, 1-year results for what was the first large, international, randomized trial to compare competitive transcatheter aortic valves demonstrate that the Lotus is noninferior to the CoreValve first-generation and Evolut R valves (Medtronic) in terms of safety, and that it may have an edge for primary effectiveness at 1 year when it comes to the composite endpoint comprised of death, disabling stroke, and moderate or greater paravalvular leak.

Here at TVT 2017, Michael Reardon, MD (Houston Methodist DeBakey Heart and Vascular Center, TX), recounted the full REPRISE III results for his US audience. His presentation was followed by a “critical appraisal” by Raj Makkar, MD (Cedars Sinai  Heart Institute, Los Angeles, CA), who was himself one of the highest enrollers in the study.

For his talk, Makkar outlined some of the potential criticisms of the trial including the choice of comparator valve, the noninferiority margin calculations for the safety endpoint, the composite primary efficacy endpoint that blended “hard” outcomes with an imaging endpoint, the high pacemaker rates seen in the Lotus arm, and the unusually high rate of disabling strokes in the CoreValve arm.

Tackling the issue of the comparator choice, Makkar noted that only half of the Medtronic valves were first-generation devices; 144 out of 305 were the newer-generation Evolut R. When he presented the trial at EuroPCR, Ted Feldman, MD (Evanston Northwestern Hospital, IL), said that an analysis based on comparator type had not yet been performed.

Reardon, also addressing the choice of comparator, pointed out that at the time the trial was being designed—and it was the US Food and Drug Administration (FDA) that mandated a comparator TAVR arm—the PARTNER 2b trial had just shown a paravalvular leak rate of 29.2% for the Sapien. “So talk about engineering a win,” Reardon said. “If we had chosen [the Sapien], that would really have been engineering a win.”

Investigators also opted to choose a single platform as the comparator valve, rather than adding in the Sapien devices, “to keep it a cleaner study,” Reardon said.

Turning to the question of noninferiority margins, Makkar pointed out that the primary safety endpoint in REPRISE III was a composite of death, stroke, major bleeding, major vascular complications, and kidney injury, with the noninferiority margin set at 10.5% based on an expected safety event rate around 40%. Ultimately, the event rate in both arms ranged from 17-20%. But on this point, said Makkar, “Observed rates are often lower than expected in clinical trials, because expected rates are generated based on the earliest operator experiences and early device iterations. In a rapidly evolving field such as TAVR, both technology and operator experience improve rapidly over time.”

The fact that pacemaker implantation was not included in the safety composite was a bigger issue for Makkar, who said: “Irrespective of whether it was a part of the safety endpoint I do care about pacemaker rates.” Pacemaker rates in the Lotus-treated patients were 35.5%, versus 19.6% for CoreValve patients, Makkar noted, although he pointed out that other trials have reported high pacemaker rates that have tended to fall as operators honed their implantation techniques.

As to the decision to include paravalvular (PV) leak, assessed by echocardiography, in the primary efficacy endpoint, Makkar stressed that severe PV leak is associated with increased mortality and is clinically relevant. That said, if PV leak is removed from the primary endpoint, the difference between Lotus and CoreValve devices (both “classic” and Evolut R) more or less disappeared, showing that PV leak was a key driver of this difference.

“I buy the fact that Lotus is likely the best in class with respect to PV leak,” Makkar said, “but rates of 11% moderate-to-severe PV leak [in the CoreValve arm] appear excessive compared to current clinical experience and more recent data with Evolut.”

The only other outlier finding was the rate of disabling strokes at 1 year, which again favored Lotus, at 3.6% compared with CoreValve at 7.3%. Here, said Makkar, he’s inclined to agree with Reardon that this is likely the play of chance.

His final take on REPRISE III: “’Superiority’ for the composite endpoint of death, disabling stroke, and moderate-severe paravalvular leak is an engineered ‘win’ and is largely driven by higher PV leak rates and somewhat by unexplainable disabling stroke rates, and [it] will be assessed by users in the context of high pacemaker rates, somewhat inferior hemodynamics, and higher valve thrombosis rates.”

However, he continued, “the aggregate of the data suggest that with certain pros and cons Lotus is clearly an acceptable alternative to commercially available CoreValve/Evolut valves.”

His chief caveat: “New pacemaker rates of 35% are a significant concern. If future iterations in technology (Depth Guard, Lotus Edge) can do what Evolut has done for CoreValve in reducing [permanent pacemaker implantation] rates, Lotus will be a serious contender for market share in high risk TAVR.”

Best Valve in a Given Scenario

The question on many people’s minds is just how Lotus would fit into TAVR centers already using the Sapien and CoreValve systems. In Europe, where six or seven different devices are available, panelist Vinayak Bapat, MD (New York Presbyterian Hospital/Columbia University, New York, NY), said that having a variety of different options helps operators treat a wider range of patients. The question is just how to choose between the different devices in the absence of head-to-head-trials of current-generation devices. Indeed, publically advocating for one device over another in TVT 2017’s main arena, surrounded by friends and colleagues studying other devices, was something few seemed prepared to do.

“That’s like standing up here and trying to tell you which of my daughters is better looking when both of them are in the audience,” Reardon quipped. “I can’t win on that.”

Jeff Popma, MD (Beth Israel Deaconess Medical Center Boston, MA), who gave a separate presentation looking at how clinical and anatomic factors could be used to determine device selection, appeared to agree. “The landscape is rapidly evolving, which means that I can make very few friends and lots of enemies by recommending one device and not another for particular subsets,” Popma said.

The Centers for Medicare & Medicaid Services-approved indications for the different valves will inevitably be the first rule of thumb in device selection. “We all want to do what we’ll get paid for,” Popma quipped. Currently, both the Sapien 3 and the Evolut Pro are FDA-approved in high/extreme risk and aortic valve in valve procedures, and both are approved for aortic valve in valve. Sapien 3, however, is the only valve currently indicated for intermediate risk (Popma described this as “pending” for Evolut Pro, given the results from the SURTAVI trial). Both devices are still investigational in low-risk patients. REPRISE III is the US premarket approval trial for the Lotus in high/extreme patients, so it’s future status in the US now rests with the FDA. Of note, a worldwide recall of the Lotus earlier this year means that it is currently unavailable, even in Europe where it holds CE Mark. The company has said it plans to bring the device back to the market before the end of the year.

Other considerations to be factored into device decision-making are vascular in nature—things like sheath sizes, iliofemoral diameter, aortic tortuosity—bicuspid disease, sinus of Valsalva width, and presence of left ventricular outflow tract calcium. For failed surgical valves, the size of the surgical bioprosthesis will determine what TAVR valve could be used for a valve-in-valve procedure. All of these factors mean that case planning, particularly as other devices enter the US market, is a critical component of patient selection, Popma concluded.

Following Popma’s talk, panelist Bernard Prendergast, MD (Guys and St. Thomas’ Trust, London, England), observed that any one of the commercially available valves may be unsuited to approximately 25-30% of patients, so “the availability of a range of valves is important.”

Giving the example of a patient with low-lying native coronary arteries, “That’s a niche where we’re missing the Lotus, because you can exquisitely position it to make sure you haven’t occluded the left main. When you’re used to having a range [of devices] and one is taken away—you miss them.”

Reardon, for his part, urged the audience not to dwell on the “negatives” in the CoreValve arm, “because that’s not what we’ve seen” in other trials and in general practice. Reardon was, in fact, the co-PI for the SURTAVI intermediate-risk trial for CoreValve. Instead, he argued, “we should focus on the positives with Lotus” in this trial.

Indeed, Reardon took this line of thinking one step further saying that comparators between TAVR devices, at this point, will just hold the field back. “I think we have enough data that we can run registries at this point and get the FDA the kind of data we really need, and kind of stop comparing against other valves.”

A Critical Appraisal of REPRISE III