Lotus carried low rates of death, stroke, and paravalvular leak, but pacemaker implantations were higher than with CoreValve. 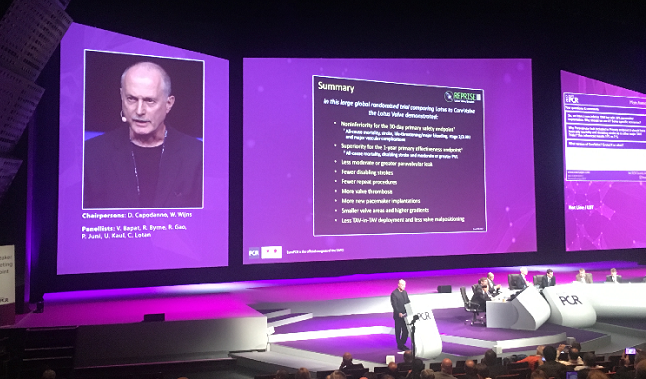 PARIS, France—One-year results for the first, large, international head-to-head trial comparing two competitive transcatheter aortic valves demonstrate that the Lotus Valve System (Boston Scientific) is noninferior to the CoreValve first-generation and Evolut R valves (Medtronic) in terms of safety, and may have an edge for primary effectiveness at 1 year—at least for the efficacy endpoint used in this study.

According to Ted Feldman, MD (Evanston Hospital, IL), who presented the results during the first Hot Line session at EuroPCR 2017, the findings demonstrate that the fully repositionable Lotus valve is “safe and effective compared to a commercially available self-expandable TAVI valve.”

The results represent some of the first good news for a valve that has faced its share of gloomier headlines over the past few months. As previously reported by TCTMD, Boston Scientific elected to recall all Lotus valves worldwide back in February—the device holds CE mark approval in Europe, but is investigational in the United States—due to a faulty pin on the device delivery system. Speaking to the press here, Feldman reiterated what the company has said previously, namely that the device has gone through extensive testing and will likely return to European and other markets late this year.

“And we still have the potential for US approval, of course depending on how this trial is received by FDA [US Food and Drug Administration], sometime next year,” Feldman said.

REPRISE III randomized 912 patients with severe aortic stenosis at extreme or high risk for surgery 2:1 to Lotus or CoreValve. Approximately half of the CoreValve-treated patients received the earlier-generation CoreValve prosthesis and half the newer, repositionable CoreValve Evolut R. The trial was conducted primarily in the United States, with additional enrolling centers in Germany, France, and Australia.

The rate of the primary composite safety endpoint, incorporating all-cause mortality, stroke, life-threatening/major bleeding, stage 2/3 acute kidney injury, and major vascular complications at 30 days, among Lotus-treated patients was noninferior to that among CoreValve-treated patients (19.0% vs 16.2%; P = 0.001 for noninferiority). There also was no difference between the two devices at 1 year (30.7% vs 30.2%, P = 0.83). Of note, however, the rate of pacemaker implantation at 30 days was nearly doubled in the Lotus-treated patients (35.5% vs 19.6%; P < 0.001). By contrast, need for aortic valve repositioning was 2.6% in the CoreValve group and 0 in the Lotus group (P < 0.001).

The Lotus device was also noninferior to CoreValve for the primary effectiveness endpoint (death, disabling stroke, and moderate or greater paravalvular leak at 1 year): 16.4% versus 28.6% in the as-treated patients (P < .001 for noninferiority), with similar results seen in the intention-to-treat group. That difference also met criteria for superiority, Feldman noted.

Of note, the rate of disabling stroke in REPRISE III was markedly higher for CoreValve than for Lotus (7.1% vs 3.6; P = 0.02), and higher than what has been seen in prior CoreValve studies. Feldman acknowledged that this was one of the more important findings in the trial, but hypothesized that it was due to chance. The more important point, he said, is that stroke rates with the Lotus valve were among the lowest seen in the major pivotal trials. “We are reassured by the low stroke rate in this high-risk group, [suggesting] there is no penalty for repositioning of the device.”

During the Hot Line session, panel discussant Vinayak Bapat, MD (St. Thomas Hospital, London, England), zeroed in on the high rate of pacemaker implantation in REPRISE III. While some of the pacemakers may simply reflect the learning curve associated with optimal placement of the device, Bapat also mused that paravalvular leak rates “often go hand in hand with pacemaker implantations. If you design a device that is going to have less paravalvular leak, it is also associated with more conduction disturbances,” Bapat said, “and we still don’t know the effect of pacemakers on the prognosis of patients’ morbidity and mortality.”

Feldman, in response, said there is “definitely some substance” to the idea that reducing paravalvular leak may come at the price of increased pacemaker implantation, but he noted that the latest generation of the Lotus valve is shorter, with early data suggesting that conduction disturbances are reduced with this new design, which leads to less left ventricular outflow tract interaction. Moreover, data from at least one of the centers that enrolled a large number of patients in REPRISE III hints that pacemaker implantations do indeed decline as operators become more experienced with the device, Feldman said.

Investigators, said Feldman, have not yet analyzed trial data to see whether results differed substantially between the original CoreValve device and Evolut R, which like Lotus can also be recaptured and repositioned.

Correction: An earlier version of this story erroneously stated that the trial was not powered for superiority.

My Evolving Clinical Experience: From Lotus to Edge