Although the overall trial was negative, investigators did see a benefit with high-dose statin preloading among patients who ultimately underwent PCI. 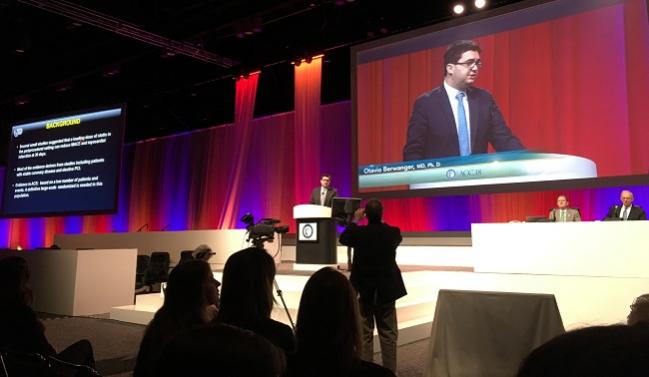 ORLANDO, FL—Patients with acute coronary syndromes who are treated with high-intensity statin therapy prior to intended coronary revascularization with PCI do not appear to benefit from the preloading strategy, according to the results of the SECURE-PCI study.

However, in a prespecified analysis restricted only to those patients who underwent revascularization, thereby excluding ACS patients who went on to CABG surgery or were managed medically, pretreatment with high-dose atorvastatin reduced the risk of major adverse cardiac events.

The benefit of atorvastatin preloading appeared to be driven by a reduction in MIs unrelated to the PCI.

Lead investigator Otavio Berwanger, MD (Heart Hospital, São Paulo, Brazil), who spoke with the media following the late-breaking clinical trial session at the American College of Cardiology 2018 Scientific Session, cautioned that the subgroup analysis must be balanced against the overall study results.

“The trial must be interpreted as a negative trial with a positive subgroup,” he said. “It should be considered hypothesis-generating.”

That said, the investigators believe the reduction in major adverse cardiac events among patients preloaded with high-intensity statin therapy who underwent PCI is consistent with findings from other smaller studies showing a benefit from pretreatment. For this reason, he suspects statin preloading can benefit certain patients, particularly those with ACS in whom PCI is virtually guaranteed.

“For those in whom PCI is very likely, such as those with STEMI, I would say [statin preloading] makes a lot of sense,” Berwanger told TCTMD.

Erin Bohula, MD (Brigham and Women’s Hospital, Boston, MA), who commented on the trial in a morning press conference, said that while SECURE-PCI is negative, there was a trend toward benefit in the overall study. All clinical endpoints, including the study’s primary MACE endpoint, moved in the right direction, and there were no safety concerns raised with statin preloading.

“We know there is a lot of data out there about using statins early in ACS,” said Bohula. In PROVE-IT, for example, high-intensity statin therapy started within 7 days of ACS showed a clinical benefit, as did early treatment with ezetimibe (Zetia; Merck/Schering-Plough) in IMPROVE-IT. “But that still leaves the early window,” she added, “and it leaves the question as to how early you want to [start treatment]?”

Given the absence of harm, as well as the tea leaves suggesting benefit, Bohula said she is inclined to treat ACS patients early with statins. “We know that aggressive lipid-lowering is good in the setting of ACS and in the setting of PCI, and while we don’t yet have the proof that very early dosing is useful, I also don’t think it’s harmful. So I walk away saying, ‘Sure, if I can, I’ll give it as early as possible.’”

In the SECURE-PCI study, which was performed at 53 sites in Brazil, 4,191 patients with ACS evaluated by coronary angiography were randomized to receive loading doses of atorvastatin 80 mg or matching placebo before and 24 hours after a planned PCI. All patients received atorvastatin 40 mg for 30 days after the second study dose of medication.

At 30 days, there was only a trend toward a reduction in the risk of all-cause mortality, acute MI, stroke, and unplanned coronary revascularization in the atorvastatin preloading arm compared with placebo (HR 0.88; 95% CI 0.69-1.11).

Speaking with the media, Craig Beavers, PharmD (University of Kentucky, Lexington), agreed that statin preloading is associated with very little downside, and that it might even come with unintended benefits, such as ensuring ACS patients are given high-dose statin therapy upon arrival and/or prescribed upon discharge.

For Neil Stone, MD (Northwestern University Feinberg School of Medicine, Chicago, IL), though, the overall study result, not subgroup analyses, should guide clinical decision-making. Participating in a panel discussion following the late-breaking clinical trial, Stone said that he does not believe the clinical guidelines for the management of ACS patients should be updated or changed to recommend preloading with statin therapy.

“I don’t like to guess when I can know and I start with randomized trials,” he said. “You answered a very important question: if we take all-comers, should we load them with a high dose of atorvastatin?” While the answer to that question is no, it does not mean physicians shouldn’t give high-intensity statins to patients with ACS. The exact timing, however, still needs to be worked out.

Stone, like Beavers, said the study did ensure that all ACS patients were treated with high-intensity statin therapy, which is a class IA recommendation for those with no contraindications.

“The drugs don’t work in people who don’t take them,” said Stone, quoting C. Everett Koop, the former US Surgeon General. “It’s an interesting idea to let people know they’ve actually received their statin before they’ve left the hospital,” he added. “The hope would be that follow-up studies would look at adherence.”

Roger Blumenthal, MD (Johns Hopkins Medicine, Baltimore, MD), who was not involved in the study, pointed out that the benefits of statin therapy in ACS are typically accrued over time as a result of lowering LDL cholesterol, but also said there is evidence pointing to early effects.

When patients take a statin acutely, he said, there is a documented reduction in abnormal vasoconstriction, which might have implications for patients undergoing PCI.

“There have been studies showing acute beneficial effects of statins on coronary vascular tone,” he told TCTMD. “The arteries are lined by endothelial cells, and those endothelial cells secrete nitric oxide. And statins have been shown in a number of cases to help keep arteries healthy and open, and this study supports that very nicely.”

Berwanger said they observed no difference in LDL cholesterol levels between the two groups at 30 days, adding that further study is needed to identify the mechanisms responsible for the benefit observed among patients who underwent PCI.

TREAT: No Major Bleeds With Ticagrelor in ACS Patients After Fibrinolysis

Statins More Beneficial Before PCI Than After in ACS Patients