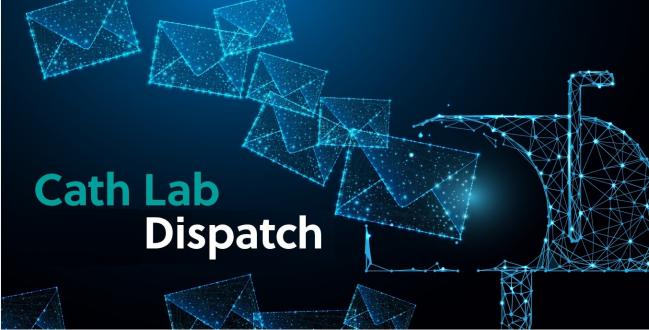 Cath Lab Dispatch is TCTMD’s monthly roundup of recent news tidbits from journals and medical meetings around the globe.

As reported by TCTMD, results of the EAST-AFNET 4 trial support early rhythm-control therapy, with either medication or ablation, in patients with A-fib who are at risk of cardiovascular complications.

A tilt test followed by pacemaker implantation shows promise for reducing the number of reflex syncope episodes in patients with a history of fainting without warning. In the BIOSync CLS study, the pacing intervention group had 77% fewer episodes over a median follow-up of 11.2 months compared with controls.

Among patients who have an MI before age 45, women are less likely than men to have a recurrent MI, but more likely to have a stroke. The data come from the Italian Genetic Study on Early-onset Myocardial Infarction, which followed patients for a median of 20 years.

Educational mailing campaigns have little impact on improving rates of anticoagulation initiation among patients with an A-fib diagnosis, according to results of the IMPACT-AFib trial.

In the American Journal of Cardiology, researchers describe the case of an otherwise healthy 55-year-old woman who developed persistent ventricular tachycardia and fibrillation after being infected with COVID-19. The investigators believe the rhythm abnormalities may be directly related to inflammation.

A research letter in Annals of Internal Medicine describes a free online tool created to help healthcare systems estimate how many COVID-19 patients they can manage per day without causing a resource deficit. The CAIC-RT calculates incident case load using age-based case distribution and severity, plus institutional variables such as acute and critical-care resources.

A small pilot study conducted at four centers in Australia and New Zealand shows good first-in-human results of an extravascular implantable ICD. In JACC: Clinical Electrophysiology, the researchers say a larger study has already begun to further investigate the potential to deliver defibrillation and pacing from an endovascular substernal implant, thus avoiding the limitations of currently available transvenous and SQ defibrillators.

A review article in Structural Heart discusses contemporary knowledge of mixed aortic valve disease, as well as the challenge of assessing these patients for intervention.

In a multinational poll conducted by the American College of Cardiology, one in five adult heart transplant programs reported that they were not actively transplanting during the COVID-19 pandemic. Eighty percent said the virus is impacting the management of patients waiting for transplants.

A cross-sectional survey of nearly 1,000 adults in the United States found that 57.6% said they intended to be vaccinated when a COVID-19 vaccine becomes available, according to a paper published in Annals of Internal Medicine. About one-third of participants were unsure, and the remaining 11% said they did not intend to be vaccinated.

Approximately one in 10 patients who undergo CABG or valve surgery have persistent opioid use 90 to 180 days after surgery, researchers conclude in a study published in JAMA Cardiology. There was a direct link between the amount of opioid medication prescribed at discharge and the potential for lingering use, which the researchers say shows the need for both increased patient education and limits on opioid prescriptions.