“It’s not easy to effect change” and more-comprehensive efforts are needed, an IMPACT-AFib investigator lamented. 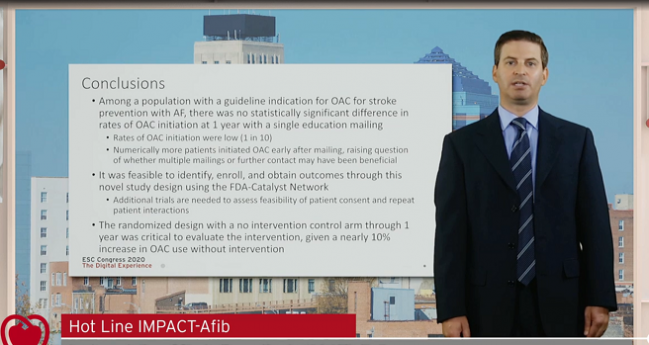 A single educational mailing to patients with A-fib and their doctors is not enough to increase uptake of oral anticoagulation for stroke prevention, results of the IMPACT-AFib trial show.

Only about one in every 10 patients who were not already taking an oral anticoagulant filled a prescription for one within the first year, with no significant difference between the intervention and control groups, Sean Pokorney, MD, MBA (Duke Clinical Research Institute, Durham, NC), reported during the virtual European Society of Cardiology Congress 2020.

He noted, however, that “numerically more patients initiated an oral anticoagulant early after mailing, raising questions of whether multiple mailings or further contact may have been beneficial.”

Indeed, a prior trial from the Duke researchers—IMPACT-AF—showed that a more-comprehensive intervention that involved education of patients and physicians, monitoring, and feedback increased use of oral anticoagulation compared with usual care and appeared to reduce the risk of stroke (although the study was not powered to look at this).

A question after that trial, Pokorney told TCTMD, was whether a simpler, lower-intensity intervention also could bump up oral anticoagulation use, which continues to be suboptimal in clinical practice.

The IMPACT-AFib trial was conducted through the FDA-Catalyst initiative, which leverages data from the agency’s Sentinel system for monitoring the safety of approved medical devices. Through that public-private partnership, the US Food and Drug Administration sends queries to participating insurance companies, which then comb through their claims information and return aggregate data sets that can be used to answer research questions.

IMPACT-AFib is the first randomized trial to be performed within the FDA-Catalyst network. The participating insurance companies (data partners) identified eligible patients and physicians, distributed the educational mailings, ran queries, and provided aggregate data for analysis. Researchers at Harvard University took those aggregate data, masked them, and sent them on to Duke for meta-analysis.

For patients, the intervention included a single mailing that identified them as someone with A-fib who was not on oral anticoagulation and included information on risks of A-fib and related stroke and on the benefits and risks of oral anticoagulation. Patients also received a card they could take to start a conversation with their doctor, with the aim of making them agents of change, Pokorney said.

Doctors received a letter explaining that their patient was being enrolled in the trial; educational materials on stroke prevention in patients with A-fib; and a mailer that they could send to the insurance companies to explain their rationale for not using oral anticoagulation in their untreated patients.

Pokorney presented an analysis of 47,333 patients (mean age 78 years; 47% women), all with a CHA2DS2-VASc score of at least 2, who were not taking oral anticoagulation at baseline. They were randomized to the intervention or control; in the control group, patients and doctors received the mailing a year after it was sent to the intervention group. Overall, patients had a high risk of stroke (mean CHA2DS2-VASc of 4.5) and bleeding, with 47% having an ATRIA score of 5 or higher and 19% having a history of hospitalization for bleeding.

The primary outcome was the proportion of patients who filled a prescription for oral anticoagulation in the first year, which did not differ between the intervention and control groups (9.89% vs 9.80%; adjusted OR 1.01; 95% CI 0.95-1.07). Although there was a small numerical difference favoring the intervention early after the mailing was sent out, it attenuated over time.

There were no between-group differences in clinical outcomes, including stroke, systemic embolism, bleeding, and in-hospital death.

Serving as a discussant after Pokorney’s presentation, Christophe Leclercq, MD, PhD (Rennes University Hospital, France), highlighted the aspects of the prior IMPACT-AF trial, noting that the educational intervention involved both patients and their relatives and included brochures, web-based and video materials, encouragement of patient and relative interaction with doctors, and systematic and repeated education of healthcare professionals. Importantly, he said, monitoring and feedback to coordinating centers allowed for additional interventions in nonadherent patients.

“First, I think that we can conclude that one single [mailing] to patients without . . . repetition has no benefit at 1 year follow-up for the use of oral anticoagulants,” Leclercq said, adding that he thinks the material used in IMPACT-AFib was more focused on the risks of oral anticoagulation rather than the benefits.

In addition, he said, “I think that we can conclude that education seems more efficient with a repeated process with a multidisciplinary approach.”

More-modern interventions and contact with patients may be ways to raise the bar and increase the use of anticoagulation and try to meet the guidelines, as well as [to provide] measurement and feedback loops. Sean Pokorney

In addition, sending printed material through the mail may not be the best way to reach patients, he said. The researchers did not have access to email addresses or mobile numbers for patients through the FDA-Catalyst network. “Those types of more-modern interventions and contact with patients may be ways to raise the bar and increase the use of anticoagulation and try to meet the guidelines, as well as [to provide] measurement and feedback loops.”

One of the important lessons from this effort, Pokorney told TCTMD, “is that it’s not easy to effect change, and there’s a reason that medical therapies across medicine—including anticoagulation for A-fib—are underused. This has shown, really, that very-low-intensity interventions are not going to be sufficient and we need to really be more comprehensive, especially including measurement and feedback, as we do implementation work.”

Future trials evaluating more-intensive interventions are still in the planning stages, but a second important take-away from IMPACT-AFib, Pokorney said, is that it is feasible to perform a pragmatic trial, identify and randomize patients, and complete follow-up through the FDA-Catalyst network.