DAPT-STEMI and REDUCE found 3 and 6 months of DAPT, respectively, were noninferior to the standard 12 months of treatment.

DENVER, CO—Less than a full year of dual antiplatelet therapy (DAPT) seems to offer acceptable safety in patients with ACS who are undergoing PCI with new-generation DES, two trials show.

In DAPT-STEMI, 6 months of DAPT was noninferior to 12 months of treatment in terms of the risk of all-cause mortality, MI, any revascularization, stroke, or TIMI major bleeding at 2 years in patients with STEMI, Elvin Kedhi, MD, PhD (Isala Klinieken Zwolle, the Netherlands), reported here at TCT 2017.

In REDUCE, 3 months of DAPT was noninferior to a full year of treatment in terms of the risk of all-cause death, MI, stent thrombosis, stroke, TVR, or BARC II to IV bleeding at 1 year, reported Harry Suryapranata, MD, PhD (Radboud University Medical Center, Zwolle, the Netherlands).

US and European guidelines currently recommend at least 12 months of DAPT after PCI in patients with ACS, but the weight of the evidence is starting to move in the direction of shorter durations in the current era, according to David Moliterno, MD (University of Kentucky, Lexington).

“In contemporary practice in select cohorts probably getting the best evidenced-based medicine, event rates are going lower and lower. And in those select patients who are at particularly low risk, meaning they’ve made it months without an event, there probably is minimal to no benefit to continuing dual antiplatelet therapy,” Moliterno, who is editor-in-chief of JACC: Cardiovascular Interventions, told TCTMD. “I think the overwhelming majority of net benefit is in the first few months and then it attenuates over time.”

Larger studies with greater power will continue to provide information about the optimal DAPT duration, Moliterno said. But for now, he added, “If somebody put a gun to my head and said, ‘Okay, pick an amount of time,’ I would say probably somewhere in that 6-to-9-month range for patients with an acute coronary syndrome, it is time to stop.”

The DAPT-STEMI trial initially enrolled 1,100 patients undergoing primary PCI for STEMI at 17 European centers. The 870 patients who completed 6 months of DAPT without having an event were randomized to continue on aspirin alone or to continue DAPT for another 6 months—completing 12 months total—before moving forward on aspirin alone. Stenting was performed with the zotarolimus-eluting Resolute Integrity stent (Medtronic).

The primary endpoint was a composite of all-cause mortality, MI, any revascularization, stroke, or TIMI major bleeding assessed 18 months after randomization (2 years from enrollment). The rate was 4.8% in patients who received 6 months of DAPT and 6.6% in those who received 12 months of DAPT. Shorter therapy met criteria for noninferiority (P = 0.004).

“This trial, for the first time, showed that in [the] modern DES era, event-free STEMI patients do not benefit from prolonged DAPT beyond 6 months as currently recommended, and sets the stage for further dedicated research in this important topic,” Kedhi said during a press conference.

Going Even Shorter in ACS

In the REDUCE trial, Suryapranata et al enrolled 1,496 patients with ACS at 36 sites in Europe and Asia, randomizing them to 3 or 12 months of DAPT after implantation of the sirolimus-eluting Combo dual therapy stent (OrbusNeich). 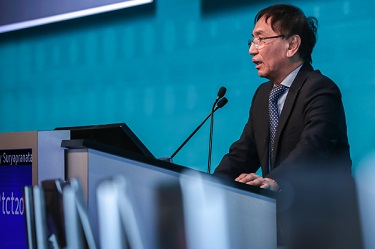 The pri mary endpoint of all-cause death, MI, stent thrombosis, stroke, TVR, or bleeding was assessed at 12 months. The rate was 8.2% in the patients who received 3 months of DAPT and 8.4% in those who received a full year of treatment, a difference that met criteria for noninferiority (P < 0.001). Findings were similar in per-protocol and as-treated analyses and after adjustment for the higher proportion of women in the 12-month DAPT group.

“A shorter DAPT strategy could be considered, if necessary, particularly for those patients who require a shorter duration, even in the ACS population,” Suryapranata said at the press conference. “Future larger trials are needed to further investigate and to confirm, of course, the safety of short-term DAPT regimens in ACS patients, particularly in the era of new ADP antagonists and new-generation DES.”

Suryapranata pointed out that overall event rates were lower than in other DAPT trials and that half of deaths were caused by cancer, but other researchers raised a note of caution regarding the trends.

“There’s an old saying, ‘Absence of difference doesn’t mean no difference if there’s an issue with power,’” Dean Kereiakes, MD (The Christ Hospital, Cincinnati, OH), said at the press conference, pointing out that REDUCE was underpowered.

Gary Mintz, MD (Cardiovascular Research Foundation, New York, NY), who served as moderator of the press conference, echoed that assessment. “Obviously if it was a larger patient population [the differences] could become significant,” he said.

Nonetheless, Mintz said, the message from DAPT-STEMI and REDUCE “is pretty consistent. Stents are safer. We’re more aggressively treating the general atherosclerotic process. So the need for dual antiplatelet therapy has decreased.” Even though relatively more focus has been placed on the prevention of thrombotic events with DAPT than on the consequences of the therapy, clinicians know that drug-related bleeding is “not a trivial occurrence,” he added.

Moliterno added his own caveats when interpreting the results of the two trials, pointing out that the patients were highly selected and most likely treated with the best evidence-based practices, which may explain the very low event rates seen in both studies. Thus, there is some question about how applicable the findings are to the wider STEMI and ACS populations, he told TCTMD.

Both studies, however, suggest that “a shorter duration is acceptable,” Moliterno said.

DAPT STEMI: A Randomized Trial of 6-Month vs 12-Month DAPT After DES Implantation in STEMI