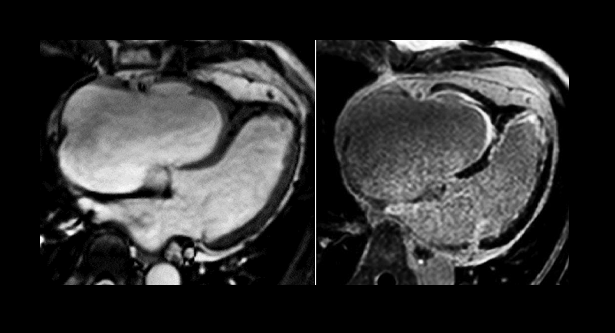 More than 8% of patients presenting to hospital with what seems to be a first acute MI have actually had a previous unrecognized infarction, according to new data from a two-center observational study. The analysis, which used late gadolinium enhancement cardiac MR (LGE-CMR), also showed that the presence of a prior infarct, identified on MR imaging, was a strong, independent predictor of subsequent cardiac events.

According to lead author Raquel Amier, MD (VU University Medical Center, Amsterdam, the Netherlands), the findings speak to the value of LGE-CMR in identifying patients in greatest need of intensive secondary prevention and monitoring.

“When you find the silent MI, there is not much more you can do, because the window of opportunity for treatment has already passed,” she told TCTMD. “All patients after an acute MI are at risk for a new event, and therefore secondary prevention is a big part of the patient care afterwards. That refers to medications to prevent cardiac remodeling and complications, and it involves lifestyle and risk management of blood pressure, cholesterol, etc.”

But in patients found to have had a silent event before their acute MI, “we could be a bit stricter and keep these patients under more intensive monitoring,” Amier added. “Particularly if they present again with atypical symptoms, perhaps consider a lower threshold for diagnostic tests for ischemia detection or angiography, because they are more at risk.”

LGE-CMR is typically used for noninvasive tissue characterization in patients with heart failure of unknown cause, for example, but according to Amier and colleagues the imaging modality has never been specifically studied as a tool for gauging the prognostic significance of prior silent MI among patients presenting with acute MI.

For the study, 392 patients presenting with a first acute MI underwent LGE-CMR within 14 days of their infarction. Imaging was used to look for regions of hyperenhancement that had an ischemic distribution pattern in territories unaffected by the acute MI. ECGs, which are more commonly used to detect prior MI, were also reviewed. To assess any association between prior MI and subsequent events, Amier and colleagues drew on all-cause mortality data from a federal registry and conducted telephone interviews with patients that specifically queried subsequent hospitalizations for acute MI, CABG, and stroke.

As Amier and colleagues report in their paper, published online today in JACC: Cardiovascular Imaging, 8.2% of patients were found to have had a prior MI on LGE-CMR. Compared with acute MI patients who had no evidence of a previous silent MI, patients with undocumented MIs at an earlier date were significantly more likely to die over roughly 7 years of follow-up (HR 3.87; 95% CI 1.21-12.38) or to experience a major adverse cardiac event (HR 3.10, 95% CI 1.22-7.86).

This association held up after for controlling for other high-risk characteristics, Amier noted. “I was surprised at the impact on the long-term outcomes, especially after correcting for traditional predictors like infarct size, multivessel disease, ejection fraction, and microvascular obstruction, because those four are really known to affect prognosis.”

Investigators also compared the ability of ECG and LGE-CMR to detect silent MIs, noting that ECGs are notoriously less sensitive at detecting smaller infarcts, particularly if patients do not develop Q-waves postinfarct.

They found that while almost the same proportion of acute MI patients were found to have silent MI on ECG review, the test was both less sensitive and less predictive than LGE-CMR. Importantly, presence of Q-waves on ECG was not significantly associated with all-cause death or MACE over follow-up.

To TCTMD, Amier pointed out that although LGE-CMR is not clinically indicated for patients following an acute MI, the technology is becoming more common, particularly in the research setting. While it’s “unrealistic” to assume that more centers will start using MR imaging to look for silent MI, she said, Amier hopes that her study will help raise clinical awareness of something that is not on the radar of clinicians, namely, that their patients may actually have experienced previous infarctions and require closer follow-up.

Diabetic patients, in particular, have been found in population studies to experience more silent MIs than the broader population and could merit a higher index of suspicion, she suggested.

“It would be nice to know why these MIs are silent,” she added. “Is it really that [patients] have no symptoms, or is it that their symptoms have more variation than we realize and that patients or clinicians don't recognize them? I think that's one important aspect for future [study], because if we really want to tackle this, I think primary prevention is the best in this regard, and that's something that this study shows—prevention right now is not enough.”

In an accompanying editorial, Erik B. Schelbert, MD (University of Pittsburgh School of Medicine, PA) and Christopher A. Miller, MBChB, PhD (Manchester Academic Health Centre, England), make a “call to action,” urging the cardiology community to include LGE-CMR as an endpoint in future trials testing therapeutic interventions for primary and secondary prevention.

“ECG is inadequate,” they say bluntly. “We have concerns that if one does not measure the incidence of unrecognized MI in vulnerable patients, one will underestimate the true therapeutic efficacy of the intervention.”

Other studies, they continue, are warranted both for preventing silent MI, most notably in elderly and diabetic patients, but also for secondary prevention specifically addressing risk-factor modification in patients with undocumented prior MI.

Commenting on the paper for TCTMD, Michael Salerno, MD, PhD (University of Virginia Health System, Charlottesville), said he agrees with the authors that CMR is “underutilized in general, but particularly in the setting of acute MI.”

Beyond just showing the presence of prior silent infarctions, the tool can also assess infarct size, LV function, microvascular obstruction, myocardial strain, intramyocardial hemorrhage, and myocardial relaxation parameters, all of which provide important diagnostic and prognostic information, he said.

“My personal feeling is that there is significant utility to using cardiac MRI to evaluate patients who have had an MI,” Salerno explained, “because you get a lot of information to characterize their risk of future events, while getting the best assessment of their mechanical function.”

This is important information, particularly in the context of new and expensive therapies including PCSK9 inhibitors and, potentially, canakinumab (Novartis), where identifying patients who are most likely to benefit has become a hot topic in cardiovascular medicine.

According to Salerno, “The real question is, as we delve into more expensive and targeted therapies, can some of this information from MRI, that is prognostically significant ultimately lead to changes in management?”

Those kinds of questions have yet to been answered, but in the meantime, he said, LGE-CMR “is something that provides a tremendous amount of information, and it's currently underutilized.”

Heart Transplants From Overdose Deaths Are Soaring, With Promising Results