Salvaging the data with a long-term look-back, investigators say the findings support a fresh view of this issue. 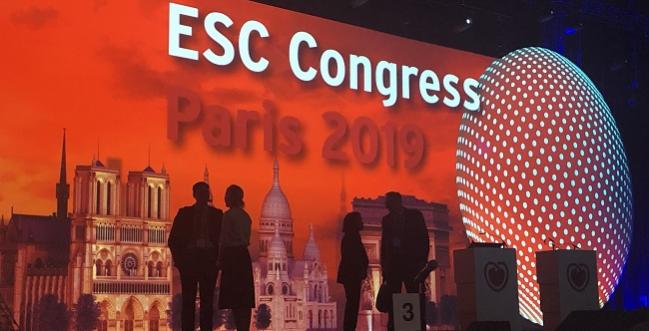 PARIS, France—Early use of an implantable cardioverter-defibrillator (ICD) following PCI in patients at high risk of death is associated with a reduction in mortality over the long term, according to results of the Defibrillator After Primary Angioplasty (DAPA) study.

DAPA, which randomized patients to ICD implantation between 30-60 days or to medical management, was halted prematurely after nearly 10 years of sluggish enrollment. That along with the lack of data on ICD therapy limits the ability to adopt the findings in clinical practice without additional trials, said Danielle Haanschoten, MD (Isala Hospital, Zwolle, the Netherlands), who presented DAPA during a Tuesday Hot Line session at the European Society of Cardiology Congress 2019.

“But the data do suggest that we might need more sophisticated risk-stratification tools to identify patients at high risk of sudden cardiac death early after acute MI,” she said.

The role for prophylactic ICD implantation following MI was established by the MADIT II trial nearly two decades ago, but the study excluded patients who had a STEMI less than 1 month prior or who had undergone revascularization in the last 3 months; moreover, only 60% of patients actually underwent revascularization. The IRIS and DYNAMIT trials subsequently studied earlier ICD implantation after acute MI but didn’t show any benefit of ICDs implanted within 40 days. IRIS, Haanschoten continued, showed a signal of reduced sudden cardiac death in the months following randomization among patients who received an early ICD, but this benefit was “neutralized” by an increase in nonsudden cardiac deaths in the ICD group that were mainly due to heart failure in the early phase after MI.

As a result, guidelines today recommend that ICD implantation be postponed by at least 6 weeks, and in the United States, a 90-day delay after revascularization is the recommended window. But as Haanschoten noted in her presentation, the timing and success of revascularization play important roles in the development of the arrhythmogenic substrate and also in the potential for left ventricular remodeling. Moreover, the window of 40 to 90 days for ICD implantation postrevascularization was never studied in the major ICD trials.

“So, is there a benefit of ICD in selected high-risk STEMI patients post-primary PCI and is there still a role for a LVEF assessment in the selection of these high-risk patients?” she asked. “And what happens to those who have LVEF improvement during follow-up, is there still an ICD benefit?”

DAPA, launched in 2004, was conducted at 12 hospitals in the Netherlands and Poland, with an intended enrollment of 700 patients, primarily with LVEF < 30%. Other enrollment criteria included impaired TIMI flow and, after a 2006 protocol amendment, primary ventricular fibrillation and Killip class ≤ 2.

In 2013, after just 266 patients had been randomized to either early ICD or medical therapy, the trial was stopped. In February 2019, investigators decided to do a “surveillance analysis,” using national mortality trends and physician follow-up to determine rates of the primary endpoint (all-cause mortality) and secondary endpoints of noncardiac death and cardiac death (heart failure, arrhythmia-related death, and sudden cardiac death). Notably, over time, nearly 20% of patients had crossed over from the medical therapy arm to receive an ICD.

Speaking in a morning press conference, DAPA coinvestigator Arif Elvan, MD, PhD (Isala Hospital), drew attention to another, secondary observation of the analysis: despite an improvement in ejection fraction in nearly 50% of both groups, the mortality benefit of ICD implantation was preserved. “I have to stress that larger studies are needed to confirm our findings,” Elvan said.

Elvan’s conclusions were echoed by Christophe Leclercq, MD, PhD (Centre Hospitalier Universitaire de Rennes, France), the discussant for DAPA. He praised the authors’ efforts to salvage some observations but said that “unfortunately, the DAPA trial was not able to answer the very interesting questions that [Dr. Haanschoten] showed you.”

Not only is the trial now 16 years old, with premature termination, but the ICD programming also was “old-fashioned,” leaving no data as to appropriate and inappropriate shocks, Leclercq pointed out. On top of this, there was a high proportion of crossovers, no adjudication of cause of death, and a lack of power for the assessment of mortality.

That said, Leclercq observed, “it is time to revisit the benefit of ICD in post-MI patients” and plans to do so are already afoot. PROFID, part of the Horizon 2020 project, now underway with the support of the European Society of Cardiology and the European Heart Rhythm Association, is combining data from 1 million patients across multiple registries to come up with a risk score for the prevention of sudden cardiac death after MI, he said. The score will subsequently be validated in another cohort, with plans to also do two separate randomized clinical trials: one in low-ejection fraction patients with a low risk of sudden cardiac death and the other in patients with intermediate ejection fraction (> 30) and a high risk of cardiac death.

Another Step Forward for Genotype-Guided Prescribing After PCI: POPular Genetics

ICDs Do Not Reduce Mortality in Patients With HF Not Caused by Coronary Artery Disease: DANISH