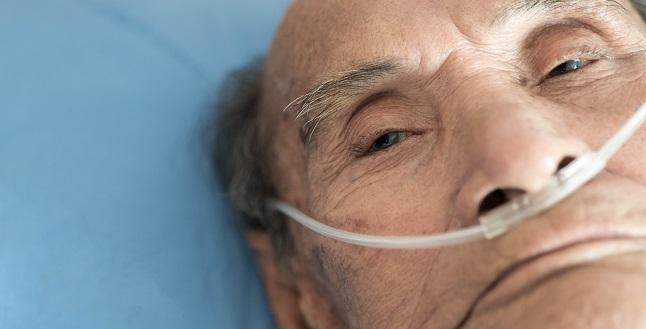 PARIS, France—Another study testing the use of supplemental high-flow oxygen therapy in all patients with suspected or confirmed acute coronary syndrome has failed to demonstrate a reduction in the risk of death at 30 days when compared with a standard protocol that provided oxygen only if saturation levels fell below normal.

There was a trend toward benefit in the roughly 10% of patients with low oxygen saturation levels (SpO2 < 95%), with the absolute risk of death 1.0% lower at 30 days among hypoxemic patients who received supplemental high-flow oxygen compared with those treated with the standard protocol.

“Overall, there was no real difference—not harmful but not beneficial,” said Stewart during a press conference announcing the results. “We did find that when the patients’ oxygen level in the blood falls below normal, and it’s not as much below normal as people currently think, mortality increases substantially. In those patients we can’t be so sure there was no benefit or harm. There may be a benefit.”

The key message here is that if a patient is having a suspected heart attack and the oxygen in the blood is normal, then you don’t need oxygen, although it probably won’t do any harm. Ralph Stewart

More recently, a meta-analysis combining eight randomized trials of various sizes, of which DETO2X-AMI was the largest with more than 6,600 patients, also showed there was no harm or benefit to supplemental oxygen therapy in patients who were not hypoxemic.

With NZOTACS, which was presented during a late-breaking Hot Line session today, investigators conducted a cluster, randomized, crossover trial comparing the two oxygen protocols in 40,872 patients with suspected or confirmed acute coronary syndromes in ambulances and hospitals in New Zealand. The supplemental high-flow protocol included oxygen for ischemic symptoms regardless of SpO2 levels. The standard protocol included oxygen supplementation only if SpO2 levels dropped below 90% (the goal was to reach a target SpO2 of 94% or greater).

Given the trial design, Stewart said they also captured patients without ACS. When they restricted their analysis to patients with STEMI, 30-day mortality was 8.8% in patients treated with liberal high-flow oxygen therapy and 10.6% in patients treated with the standard protocol (OR 0.81; 95% CI 0.66-1.00). Nevertheless, Stewart said the STEMI subgroup analysis should be viewed as hypothesis-generating only and needs to be confirmed in a larger study.

Most patients studied in the trial had normal SpO2 levels, but for those with hypoxemia, mortality at 30 days was more than fourfold higher than in patients with normal oxygen saturation. For the 3,273 patients with SpO2 levels less than 95% on ambulance arrival, 30-day mortality was 10.1% for patients who received supplemental oxygen and 11.1% for those who only received oxygen if SpO2 levels dropped below 90%.

“The key message here is that if a patient is having a suspected heart attack and the oxygen in the blood is normal, then you don’t need oxygen, although it probably won’t do any harm,” said Stewart. “If the oxygen level is below normal, it might be beneficial, but we need another big study to know that for sure.”

Steen Dalby Kristensen, MD, DMSc (Cardiovascular Research Centre, Aarhus University, Skejby, Denmark), who was not involved in the trial, said that in the past there wasn’t much physicians could do for patients with MI. “One of the things we could do was to give them oxygen,” he told TCTMD. “Now I think we know that if the patient doesn’t have low oxygen levels, then it doesn’t work. This is what I think we’ve learned.”

At his hospital, supplemental oxygen is given only to patients with low levels, meaning SpO2 less than 94%. The 2017 ESC guidelines for the management of STEMI patients only recommend oxygen in hypoxemic patients. Routine oxygen is not recommended in patients with SpO2 levels (percentage of oxygen saturated with hemoglobin) 90% or higher. Kristensen noted that individuals with low oxygen levels tend to be in heart failure, and this poor pump function can lead to lung congestion and low arterial oxygen saturation.

In the 2017 DETO2X-AMI study, investigators only randomized patients into the trial once consent was given, an approach that tended to exclude sicker MI patients. Oxygen administration was more prolonged in the DETO2X-AMI , whereas the NZOTACS investigators provided oxygen only as long as myocardial ischemia was present. Despite these differences in trial design, Stewart said their study lines up with the absence of benefit observed in the DETO2X-AMI study.

For Robin Hofmann, MD, PhD (Karolinska Institute, Stockholm, Sweden), the principal investigator of DETO2X-AMI and scheduled discussant during the ESC session, the NZOTACS trial strengthens the evidence against the routine use of oxygen in patients with acute MI with ST-segment elevation. Regarding the subgroup analyses suggesting potential benefit in those with low oxygen levels, or in the STEMI subgroup, he said such findings need to be validated in future studies.