Still, some questioned whether the required use of a Foley catheter might be a drawback for patients and doctors. 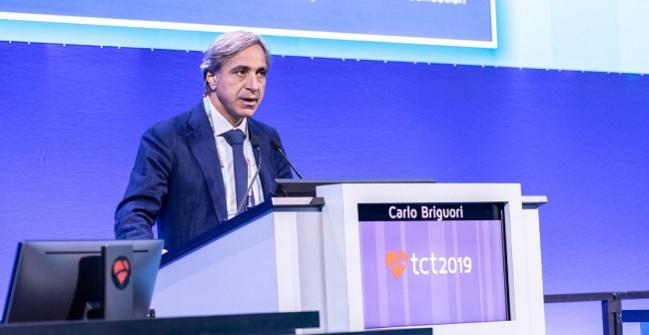 The primary composite endpoint of contrast-induced acute kidney injury and/or pulmonary edema following catheterization procedures occurred in 5.7% of patients treated with the UFR-guided approach and 10.3% of patients randomized to the LVEDP-guided approach (RR 0.56; 95% CI 0.39-0.79).

Lead investigator Carlo Briguori, MD, PhD (Mediterranea Cardiocentro, Naples, Italy), who presented the results of REMEDIAL III during a late-breaking clinical trial session at TCT 2019, reported that just 22 patients would need to be treated with the UFR-guided strategy using the RenalGuard (CardioRenal Systems) to prevent one primary endpoint event. He noted that hypokalemia occurred in 6.2% of the patients in the UFR-guided group, a rate that was significantly higher than the 2.3% rate in those randomized to the LVEDP strategy (P= 0.013).

“A strict control of potassium balance is required during the RenalGuard therapy,” said Briguori.

Speaking during a press conference where the results were presented, Juan Granada, MD (Cardiovascular Research Foundation, New York, NY), pointed out that several strategies have been tested to reduce the incidence of acute kidney injury following interventions. “We have a lot of data with randomized studies, with multiple approaches, with different results, most of them negative,” he said. “It’s important because as procedures become more complex and longer, such as in [chronic total occlusions], there is a continued interest in minimizing the potential kidney injury induced by the procedures.”

The REMEDIAL III results, by showing such a large reduction in acute kidney injury with the UFR-guided strategy, will likely be of interest to many interventional cardiologists, said Granada.

Speaking with TCTMD, Somjot Brar, MD (Kaiser Permanente/University of California, Los Angeles), who led the POSEIDON trial testing a hydration protocol based on LVEDP in patients undergoing coronary catheterization, said the last 10 years have seen operators shift toward targeted fluid administration for interventional procedures, with more and more physicians recognizing that fluid needs to be the cornerstone of efforts to minimize the adverse effects of contrast media. Overall, Brar said he was impressed by the study results, noting that the volume of fluids used in the UFR- and LVEDP-guided strategies is much higher than volumes used by physicians in clinical practice.

“Part of that is comfort level,” he said. “Physicians just aren’t accustomed to giving 300, 400, or 500 mL per hour for the duration of the procedure, or for a few hours afterwards. These data again show that it can be done safely.”

The study included 708 patients with or at high risk for acute kidney injury undergoing coronary catheterization (approximately 3% underwent peripheral procedures). Contrast-induced acute kidney injury was defined as a 25% or greater increase in serum creatinine concentrations and/or a 0.5 mg/dL or greater increase from baseline 48 hours after contrast media exposure. Acute pulmonary edema was defined as the development of dyspnea and/or tachypnea and/or breathlessness associated with tachycardia, anxiety, cough, or sweating after starting the hydration regimen.

Hydration volumes were significantly higher in patients treated with UFR-guided strategy (2,700 mL versus 1,700 mL with the LVEDP-guided approach). The mean UFR rate was 416 mL/h, with 95% of patients achieving a target UFR of 300 mL/h or greater.

The benefit of the UFR-guided approach was driven primarily by a reduction in contrast-induced acute kidney injury (5.7% vs 10.0%; P = 0.036). There was a significant reduction in the risk of pulmonary edema, but events were infrequent (one event versus seven with the LVEDP-guided approach; P = 0.069). Secondary endpoints, including changes in creatinine at 48 hours and changes in cystatin C at 24 and 48 hours, also favored the UFR-guided strategy. At 30 days, the cumulative incidence of major adverse events was lower in the RenalGuard arm (7.3% vs 12.0% with the LVEDP-guided approach; P = 0.030), a difference driven by a lower rate of sustained kidney damage.

Is It Practical? Cost-Effective?

For Brar, the clinical endpoint of contrast-induced acute kidney injury is consistent with those used in other clinical trials. And while it does correlate with hard clinical events, he questioned the onetime measurement of serum creatinine at 48 hours. “In a lot of trials, we try to measure [serum creatinine] at multiple timepoints, because just measuring it in that 24 or 48 hours [means there] is a significant potential to underestimate events,” said Brar. “It was one of the things we saw in the AMACING trial, which, amazingly, suggested that hydration was not a benefit. But again, one of the shortcomings in that trial was the number of assessments.”

To TCTMD, Brar also emphasized that hydration outside the 4-hour pre-, intra- and postprocedure window is important, noting that the time spent in hospital (inpatient versus outpatient setting) could impact the results. Finally, the use of the Foley catheter, which is required with the RenalGuard system, is a drawback, especially in a busy catheterization laboratory.

“It slows things down,” said Brar. “You have to place this one additional thing and manage it during the procedure. I also think, for some patients, there might be a hesitancy to have one. It’s not seen as a pleasant thing. If [the UFR-guided strategy] can be done in the absence of a Foley catheter, I think the adoption in the cath lab would be much greater.”

Speaking during the press conference, Sripal Bangalore, MD (New York University School of Medicine, New York, NY), said his institution was initially part of studies with RenalGuard, but one of the largest obstacles for enrolling patients was the need for a Foley catheter. “They’d just refuse,” he said of patients.

Gary Mintz, MD (MedStar Cardiovascular Research Network, Washington, DC), who also participated in the press conference, took the opportunity to argue against the use of any contrast media during coronary procedures. “If you do imaging-guided, zero-contrast PCI, you do not get contrast-induced nephropathy. Period. End of discussion,” he said. Bangalore added that they perform zero-contrast PCI and have not observed acute kidney injury for 5 years. Given the extra costs of the RenalGuard system, as well as patient reluctance, he questioned whether it would be practical or cost-effective.

Briguori said their study attempted to minimize the use of contrast media, with patients in the LVEDP- and UFR-guided study arms receiving 72 mL and 67 mL, respectively (P = 0.18). They observed an association between contrast volume and acute kidney injury, as well as an inverse association with hydration volume and acute kidney injury, said Briguori.

There is another ongoing trial testing the safety and efficacy of the RenalGuard system in at-risk patients. The CIN-RG trial is comparing the UFR-guided strategy against standard care for the prevention of contrast-induced nephropathy in approximately 325 patients undergoing coronary catheterization.

Highs and Lows: Contrast Volume in PCI Varies Greatly Among US Physicians