TAVR Operators: Can One Do It All or Are Two Still Justified?

A debate at SCAI delved into contemporary TAVR practice and whether the mandate to involve surgeons remains necessary.

LAS VEGAS, NV—In the United States, TAVR has always been mandated as a two-operator procedure—the Centers for Medicare & Medicaid Services (CMS) requires one interventional cardiologist and one surgeon each be involved in the case. But in a debate at the annual meeting of the Society for Cardiovascular Angiography and Interventions (SCAI), two interventional cardiologists jousted over whether that should change.

Participants in the session—both panelists and audience members—also joined in the debate, citing many reasons why, by and large, surgeons have a place in the operating room.

What Should Be Mandatory?

Numerous advances have been made in the field of TAVR since its commercialization in 2011, said Clifford J. Kavinsky, MD, PhD (Rush University Medical Center, Chicago, IL), who argued that “the mandatory requirement for co-participation of a surgeon and a cardiologist is outdated.”

Recent studies have shown TAVR “to have equipoise or superiority across all cardiac surgical risk subsets. As a result, we're going to be seeing more and more low-risk patients,” he said. “We've learned the procedure, we have some wisdom, we know what the problems are, we know how to navigate them, and as a result, mortality is going down. . . . Some of the complications which could lead to immediate surgical intervention, such as annular rupture, coronary obstruction, cardiac perforation, major vascular bleeding, or valve embolization [have] diminished in frequency to well under 1%.”

Additionally, new technologies like the Centera motorized self-expanding TAVR valve (Edwards Lifesciences) are being developed for single operator use. “Edwards sees the future, so I think we need to see the future,” he said.

But perhaps cost-effectiveness is the most practical push for change. Currently, TAVR cases are administratively appended with the 62 modifier, which allows for both the surgeon and the interventional cardiologist to bill for the same procedure and each be reimbursed, Kavinsky explained. Largely because of the length of time to do a TAVR has gone down, TAVR codes are being reevaluated, and he estimated that reimbursement will drop by around 10%.

“I anticipate that there will be further reductions in reimbursement for TAVR as we move forward,” he said. “Is it going to be financially feasible for two operators to be in the room for all TAVRs as we look to the future? I say no.” 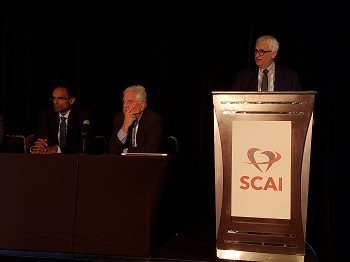 Showing a photo of a TAVR case, Kavinsky pointed out the surgeon “standing in the back, really not participating, [and] collecting 50% of the revenue.” While this does not happen at all programs, “it’s true often enough.” Surgeon participation, catheter and wire skills, and interest is “inconsistent and variable,” he said. Additionally, “surgeon unavailability leads to canceled procedures, inefficient use of hospital resources, patient unhappiness and dissatisfaction, and diminished team morale,” argued Kavinsky.

A better model for TAVR billing is what is currently in place for the MitraClip (Abbott), Kavinsky suggested. This gives an option for one or two operators, be they cardiologists or surgeons. The surgeon would not be off the hook entirely, he said, adding that the multidisciplinary heart team will still determine the need for the procedure in the first place. “A straightforward transfemoral case may not require a surgeon. A case with red flags or cases with alternate access, highly calcified valves, low-lying coronaries—these should be scheduled with surgical participation,” he concluded.

Arguing for the other side, William Suh, MD (Ronald Reagan UCLA Medical Center, Los Angeles, CA), agreed that TAVR-related complications and mortality have decreased and the procedure has generally become more routine to do. However, he pointed to the airline industry and the fact that every commercial flight today still has two pilots.

“It's primarily for safety, because if something ever were to happen to that captain, there's another pilot that can step in and take over,” Suh said. “Additionally, the first officer provides a second opinion on piloting decisions, therefore keeping pilot error to a minimum.”

Referencing several informal Twitter polls he posted in anticipation of the SCAI session, he said that 80% of the 316 respondents to one poll said that they would like to see TAVR remain a two-operator procedure, with some suggesting that even complex coronary cases could benefit from more than one operator.

But “just because your cardiac surgeon may be the best in the OR doesn't necessarily give them the right to be in a TAVR procedure,” Suh commented. “I would say that cardiac surgeons have to be also properly trained to be participants in this procedure.”

In another Twitter poll, he asked where the cardiac surgeon is during a TAVR procedure and 35% said “somewhere in the hospital.” This, however, may be reflective of international respondents who are not required to have a surgeon actively involved in their TAVRs, he said. Notably, 46% said their surgeon was scrubbed in.

Ultimately, Suh argued, “two operators are better than one, I think primarily for patient safety—complications can and will happen. . . . I do still believe that TAVR is still a team sport and there is no I in team.”

A Debate to ‘Struggle With’

In a panel discussion following the debate, Anand Prasad, MD (UT Health San Antonio, TX), said: “As we contract down to a single-operator approach, where we start eliminating the people that are involved in the TAVR process, I think that’s a little bit dangerous. Having multiple eyes on the patient, looking at the appropriateness of the procedure is good. When we start doing things in isolation, we get into trouble.”

It’s easy to say that the cardiologist will do the TAVR and the surgeon will be somewhere in the hospital and accessible in case of an emergency, he continued, “but these complications we all know happen fast and the surgeon needs to know: Can I even open this chest? Is there a patent LIMA? Is this a patient I even want to put on pump? . . . If the surgeon is not involved, they don’t know that. The key is getting them involved and particularly in the valve clinic; the appropriateness and selection has to be a multidisciplinary approach.”

“It’s a really interesting balance,” noted session co-moderator Chandan Devireddy, MD (Emory School of Medicine, Atlanta, GA). With the prevalence of complications “now so exceedingly small” with low-risk TAVR patients, the community needs to ask itself: “Do we need to mandate an interventional cardiologist and a cardiothoracic surgeon for this infinitesimal risk?” On the other side, is it pardonable if a low-risk patient has a complication requiring open surgery and they cannot be immediately operated on?

Having multiple eyes on the patient, looking at the appropriateness of the procedure is good. When we start doing things in isolation, we get into trouble. Anand Prasad

“This is a debate we're going to have to struggle with,” Devireddy said, although he agreed with Kavinsky that the best long-term option might be to eliminate the mandatory requirement for a cardiologist and a surgeon to be scrubbed in on a case. “But as a heart team we use sufficient expertise and judgement to sort of determine which of these cases we really need to have two [operators]. Some of these cases that are low-risk are going to be more straightforward, and as long as you have a surgical team present in the hospital, then we can get these patients out to the OR or crack their chest on the table if need be.”

“At what point does this move into [something akin to] anesthesia—99% boredom and 1% pure terror?” asked co-moderator David L. Brown, MD (The Heart Hospital Baylor Plano, TX).

Inevitably, “part of this whole discussion . . . boils down to some [relative value units (RVUs)] and the whole practice of cardiology in this country of how are people paid, how are they reimbursed. Is it productivity-driven? Is it RVU-driven? Are you paid a salary? Can the team function and basically build a bigger ship?” said Brown. “All the same fights and turf wars” previously seen in interventional radiology and vascular surgery, as well as in the carotid and peripheral spaces, are now starting to occur in TAVR, he added.

Sameer Gafoor, MD (Swedish Heart and Vascular Institute, Seattle, WA), who was in the audience, brought up the fact that “all the trials for PARTNER and Medtronic [had methods that included] both a cardiologist and cardiothoracic surgeon involved in each case and evaluation. Maybe that’s the reason we got the safety numbers that we did.”

Kavinsky replied that “we're not moving away from that. We’re just talking about in the procedure room. We're not talking about changing the multidisciplinary team, the evaluation, [or] the role of the surgeon. The surgeon will know the case in detail. He or she will know if there’s a complication just exactly what the situation is, and they will walk in and do what needs to be done.” 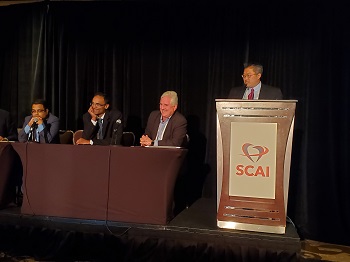 Suh said he’s asked cardiologists in the United Kingdom if they’ve been tracking their outcomes without a surgeon involved, and while they haven’t yet, “we could probably get some of that data.”

Rahul Sharma, MD (Carilion Clinic, Roanoke, VA), who also was in the audience, said he is concerned that if a surgeon is “not actually planning to be [present] for a case, [they’re] checked out.” Even if they were involved in the evaluation of the patient and agreed that it is a straightforward case, “their degree of cognitive power or contribution to the evaluation of that case may be diminished because they’re not going to be there. Their interest may be diminished because they're not going to get any kind of financial incentive from being there,” he added.

Public Comments Largely Supportive of CMS Plan for TAVR, With Some Suggested Tweaks