SAN DIEGO, CA—We’ve made it to the final day of TCT 2018, and the TCTMD news team had a slate of late-breaking trials to cover as best we could before packing our bags to head home. 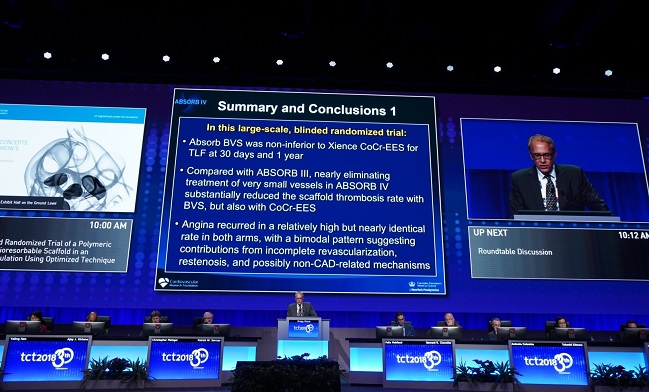 ABSORB IV, presented by Gregg Stone, MD, showed a hint that better technique and better patient selection can improve outcomes with this now-defunct bioresorbable device. But of note, paying special attention to these issue also improved outcomes in the drug-eluting stent arm as well. While the Absorb scaffold met the criteria for noninferiority in this trial, rates of 30-day and 1-year MI, TLR, and stent thrombosis still tended to be numerically higher in the Absorb-treated patients. “All of the lessons learned will be useful” in the development of next-generation technologies, Deepak Bhatt, MD, said during a morning press conferences. 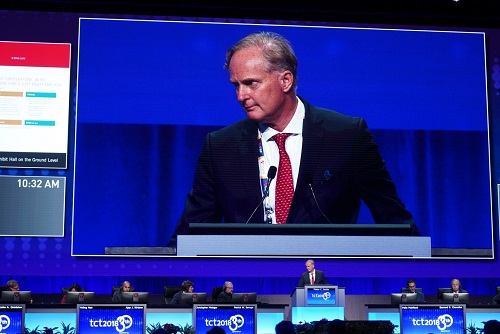 In a second bioresorbable stent study in today’s session, Absorb again met the bar for noninferiority, but scaffold thrombosis and MI rates were higher, despite operators applying the optimized implantation protocol. During a discussion following ACUTE COMPARE, panelists debated whether bioresorbable stents are still needed, given the very low rates of adverse events, including revascularization, seen with the newest drug-eluting stents. While presenter Pieter C. Smits, MD, PhD, argued that a device that does its job than disappears still remains a worthy goal, other panelists, including Mayra Guerrero, MD, and Renu Virmani, MD, argued that with the newest-generation metallic stents “the bar is already so high” that perhaps research and development dollars might be better spent in other areas.

Get the full scoop on these two trials in Michael O'Riordan's story here.

Renal denervation is back, at least in terms of investigation, with multiple sham-controlled pilot studies establishing that ablating the nerves in the renal arteries with radiofrequency or ultrasound energy lowers blood pressure in patients with hypertension. Now, there are some head-to-head data comparing the different technologies. 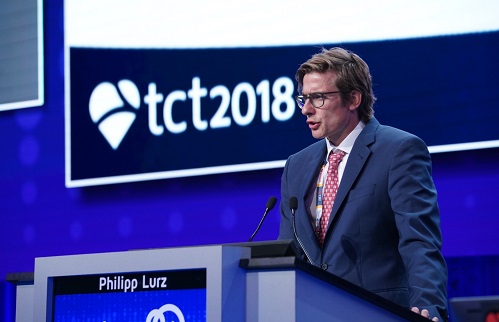 “Obviously, longer follow-up and large, multicenter studies are needed to do head-to-head comparisons, especially to determine the long-term safety of these technologies,” Philipp Lurz, MD, PhD, concluded, adding that “this pilot study precludes definite recommendations regarding the preferable renal denervation approach at present.”

In discussion of these results during the press conference, Felix Mahfoud, MD, said that the presence of a renal denervation trial at TCT 2018 indicates that this area of research is “back on track.” Bhatt, however, who was principal investigator on the famously negative SYMPLICITY-HTN 3 trial, urged investigators to take the long view, to make sure that more aggressive ablation modalities, like ultrasound, now prove their safety and durability over time. While it may look, for now, as if renal denervation is being “resurrected,” he said, there was early hype for renal denervation, which paved the way for cynicism when the large trials failed. It would be a shame to see that happen again now, said Bhatt.

The TCTMD news team is also scrambling to pull together stories, not only from the trials above but also from the studies presented during the late-breaking clinical science session that followed. Find our full coverage of CorMicA: a randomized trial of invasive coronary function testing in patients with angina and nonobstructive coronary artery disease, and NEOPRO, a nonrandomized comparison of two transcatheter heart valves in patients with severe aortic stenosis, by clicking on the trial names. One-year results from  PORTICO-1, the multicenter, postmarketing study of the Portico self-expanding transcatheter valve used in countries outside the United States, will be live soon.