This morning’s late-breaker focused on new valves versus old valves, new concerns . . . and old ones.

SAN FRANCISCO, CA—SCOPE I is the first of two head-to-head trials underway for the investigational Acurate Neo transcatheter device (Boston Scientific), this one a comparison against Sapien 3 (Edwards Lifesciences). In the first surprise of the morning, this trial failed to meet its primary endpoint of noninferiority at 30 days and, indeed, in additional analyses, the Sapien 3 valve was shown to be superior, at least a for the composite endpoint of safety and efficacy used in this study. That included all-cause death, any stroke, life-threatening or disabling bleeding, major vascular complications, coronary artery obstruction requiring intervention, acute kidney injury stage 2 or higher, valve-related dysfunction requiring repeat procedure, rehospitalization for valve-related symptoms or congestive heart failure, moderate or severe prosthetic valve regurgitation or prosthetic valve stenosis at 30 days.

“Differences between the two TAVR devices were driven by moderate or severe paravalvular regurgitation and stage 2 or 3 acute kidney injury in favor of the Sapien 3 device,” presenter Jonas Lanz, MD (Bern University Hospital, Switzerland), said during a press conference earlier in the day.

#TAVIwars, part 1 - what a beating for the ACURATE Neo valve in the SCOPE I trial versus Sapien 3: more AKI, more paravalvular leak, more valve-in-valve procedures at 30 days. But busy primary endpoint, with a mix of hard and soft components. #TCT2019

The trial randomized 739 patients 1:1 to the Acurate Neo or the Sapien 3. At 30 days, 23.7% of patients treated with the Acurate Neo had experienced a primary endpoint event compared with just 16.5% in the Sapien 3 group (P for superiority = 0.0156). In further analyses, key significant differences between the groups appeared to rates of acute kidney injury and paravalvular leak.

More follow-up is needed to see whether these have any long-term effects on hard clinical outcomes, Lanz said.

Commenting on the findings in a morning press conference, Michael Mack, MD (Baylor Scott and White Heart Hospital, Plano, TX), pointed out that not all endpoints were going in the direction of favoring the Sapien 3 device; stroke, for example, favored the Acurate Neo. That said, Mac continued, these findings “speak to the fact [of] how high the bar is right now, how good the procedure is, and how good the devices are—and it’s an incredibly hard bar to meet for any new device.”

TCTMD's coverage of SCOPE I is here. 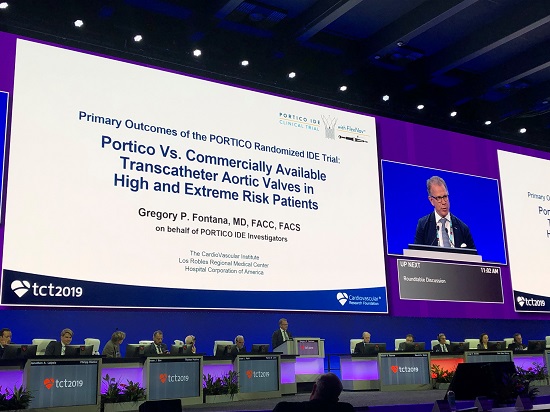 The story was a bit rosier for PORTICO, the randomized trial comparing the Portico transcatheter valve (Abbott) to commercially available devices in patients with severe aortic stenosis. That’s a happier twist in the tale of a device that saw its usage paused for nearly a year due to problems of reduced valve leaflet mobility following implantation. Gregory Fontana, MD (Los Robles Regional Medical Center, CA), presented the late-breaking results here today.

In this trial, 750 patients at 69 sites were randomized to either the Portico on the one hand, or to one of the US-approved Edwards or Medtronic valves. At 1 year, Portico was noninferior for a primary safety endpoint and for a primary safety endpoint, with additional analyses suggesting that safety improved as operator experience increased, particularly when the FlexNav delivery system was used. Pacemaker implantation, however, was more than double in the Portico-treated patients at 27.7% versus 11.6%. Major vascular complications also were higher with the investigational device.

Here's our coverage of PORTICO. 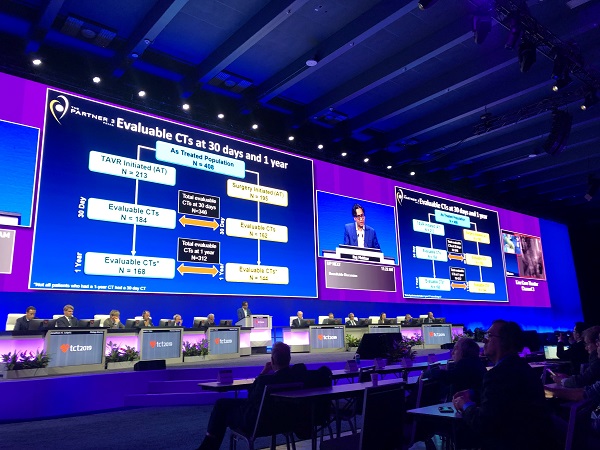 The third and final late breaker in this morning’s session was the CT substudy from PARTNER 3, an FDA-mandated look at whether leaflet thrombosis is a true concern with these new devices. As Raj Makkar, MD (Cedars-Sinai Medical Center, Los Angeles, CA), showed here, hypoattenuated leaflet thickening (HALT) and reduced leaflet motion were more evident at 30 days among patients with severe aortic stenosis treated with TAVR than with SAVR in the low-risk PARTNER 3 trial, but by 1 year the rates  did not differ between surgical and transcatheter treatment arms.

Both HALT and reduced leaflet motion resulted in slightly higher mean aortic valve gradients at 30 days and 1 year, but Makkar said this increase is “clinically insignificant,” noting there were no deaths or MIs in patients with subclinical leaflet thickening. Moreover, HALT “was dynamic and spontaneously resolved” in 50% of cases, even in the absence of anticoagulation, whereas new HALT had appeared in 20% of patients at 1 year. 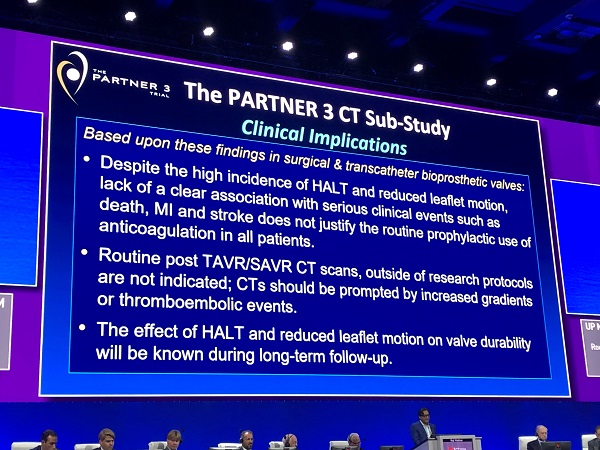 Given the lack of a clear association between HALT and reduced leaflet motion with serious clinical events, the routine use of oral anticoagulation following TAVR is not justified, Makkar said.

That may have implications for surgical valves too, Mack mused in the press conference. Currently 3 months of anticoagulation following surgical valve replacement has a class 2a recommendation in the guidelines, Mack said. That may need to be revisited, he said.

Read our full story on the PARTNER 3 CT substudy here. 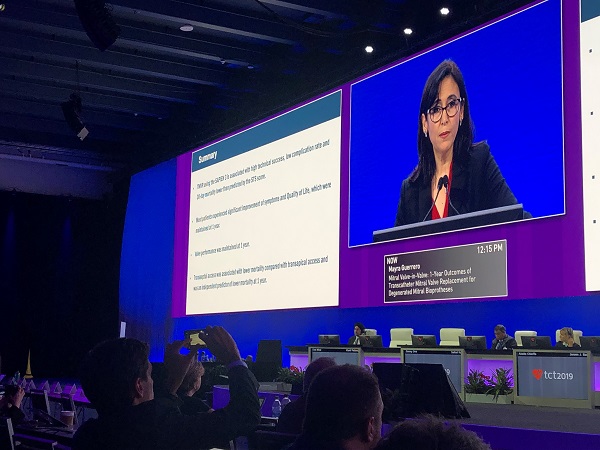 Following a break for a live case, “late-breaking” topics were back in the TCT main arena. First up was Mayra Guerrero, MD (Mayo Clinic, Rochester, MN), who presented real-world findings from 1,576 high-risk patients in the TVT Registry treated with a valve-in-valve approach to failed mitral valve prostheses.

In a nutshell: transcatheter mitral valve-in-valve procedures done via transseptal access using the Sapien 3 valve were associated with lower mortality through 1 year compared with those done with transapical access.

During a press conference, Michael Mack, MD (Baylor Scott and White Heart Hospital, Plano, TX), said he was encouraged by these results. “I don’t think any surgeon is going to disagree with this: if we don't have to do another redo mitral valve operation, that's a good thing,” he said. “This is a very positive finding for us because if you look at most operations done in cardiac surgery, the 30-day mortality is between 1-3%. The mortality here is 11%, it’s one of the highest risk procedures we do in cardiac surgery. To have an alternative that cuts that 30-day mortality in half down to 5% is very much a positive.”

Full story on this trial can be found here. 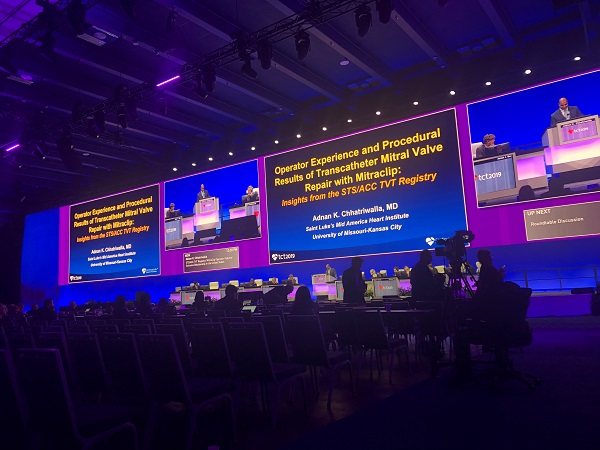 For this complex procedure, greater experience was associated with shorter procedures, improved procedural success, and fewer in-hospital complications, Chhatriwalla reported. Though improvements started to flatten out at 40 to 50 procedures, there were still gains associated with increasing experience up to about 200 MitraClip implantations.

Chattriwalla told TCTMD that those associations remained after adjustment for baseline patient characteristics, which indicates that case selection does not explain the findings. “So we think we’re identifying the true procedural learning curve,” he said.

TCTMD’s full story is here. The findings were published simultaneously online in the Journal of the American College of Cardiology. 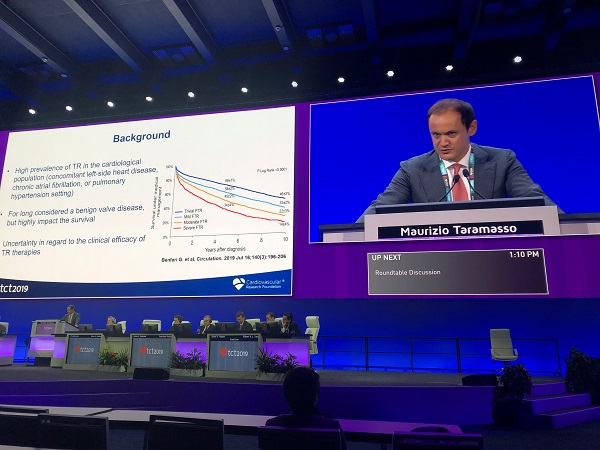 Two more presentations rounded out this late-breaking clinical science session: One is an STS registry analysis of volume-outcome relationships with mitral valve surgery in the United States. The other is a snapshot of transcatheter treatments for high-risk patients patients with tricuspid valve disease, using propensity matching to see how these patients fare as compared with medical therapy. Stay tuned for full details on these studies on TCTMD.