This large registry analysis could have implications for patients at high risk of bleeding who need reduced DAPT following stenting, according to experts. 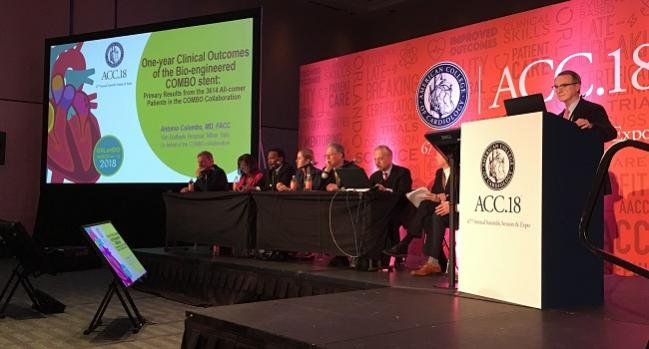 ORLANDO, FL—A novel stent comprised of thin struts plus a bioengineered layer of endothelial progenitor cells is safe and effective at 1 year, according to the largest registry study of the device to date. The stent could provide a better option than what is currently available for patients at high risk for bleeding who may not be able to tolerate long durations of dual antiplatelet therapy (DAPT), the study author says.

The Combo stent (OrbusNeich Medical BV), is “a device that we've been thinking about for a decade. It’s been called a pro-healing stent,” said Martin Leon, MD (NewYork-Presbyterian/Columbia University Medical Center, New York, NY), who led the discussion following the study’s presentation yesterday at the American College of Cardiology 2018 Scientific Session. “From a technology standpoint, it has some very interesting properties that should confer some added early safety to a drug-eluting stent, which I think is very exciting.”

Antonio Colombo, MD (San Raffaele Hospital, Milan, Italy), who presented the results of the COMBO study—a combined analysis of the MASCOT and REMEDEE registries including 3,614 patients enrolled between 2013 and 2016—explained that having access to this stent “gave the physicians some confidence to be less aggressive to dual antiplatelet therapy.” This was especially notable given that many of the patients enrolled were high-risk for bleeding, he added.

At 1 year, the primary endpoint of target lesion failure was 3.9%. The individual endpoints of cardiac death (1.6%), target-vessel MI (1.2%), and clinically driven TLR (2.2%) were similarly low. Definite/probable stent thrombosis was observed in 0.8% of patients at 1 year.

“We would like to see a future randomized trial that should test the safety and efficacy of this stent compared to other third-generation drug-eluting stents,” Colombo said in his presentation.

Leon commented that he was impressed by the “extremely low” rate of target lesion failure observed in this study. “I wonder two things,” he said. “First, the definition that you use for target-vessel MI, could that have influenced the extremely low TLF rate? And the adjudication of events, was this performed in a standard way with the [clinical events committee] or was this basically site reported?”

Colombo, too, responded that he is “always concerned about underreporting” when he sees low numbers in a registry analysis. “I'm only positively impressed by high numbers,” he remarked.

In fact, “there's no question that we are dealing with underreporting of periprocedural MI” in this study because of the lack of strict troponin collection in asymptomatic patients across institutions, Colombo continued. “This is definitely a limitation.” The TLR rate is also likely underreported, he added, given that second procedures are not always captured.

Leon said he believes this is “the beginning of many clinical trials,” but asked Colombo if he had an idea about the type of patients he would profile for added benefit with this stent.

Noting that there is no evidence yet to back up his perception, Colombo said he would prefer this stent if he had an anticoagulated elderly patient with a high risk of stopping their DAPT, poor social status suggesting they’re unlikely to follow guidelines, and a diagnosis of atrial fibrillation.

What is still unknown is exactly how DAPT was used in the COMBO study, especially for those with events, but Colombo said this analysis is forthcoming.

“Clearly if we could lay down good endothelial cells early in the process and reduce the use of DAPT, that’s a benefit across board, both in bleeding patients and those who refuse to take medicine or can't take medicine,” commented panelist Morton Kern, MD (University of California, Irvine). “So that's easy, but that data is not quite here yet."

One-year Clinical Outcomes of the Bio-engineered COMBO stent: Primary Results from the 3614 All-comer Patients in the COMBO Collaboration

The Combo Stent: From Concept to Clinical Performance

The COMBO Plus Dual Therapy Stent: Clinical Update and Experience