Valve disease is a marker of higher risk, providing another reason to strongly advocate for anticoagulation in these patients, one expert says. 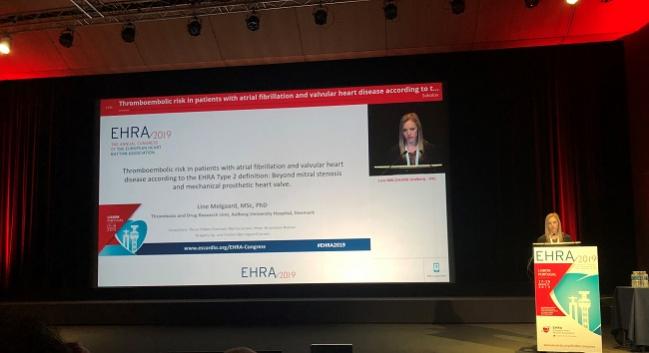 LISBON, Portugal—Among patients with A-fib, those with valvular heart disease not including moderate-to-severe mitral stenosis or a mechanical heart valve—classified as EHRA (Evaluated Heartvalves, Rheumatic or Artificial) Type 2—have a particularly high thromboembolic risk that seems to be lowered by oral anticoagulation.

At 1 year, the crude rate of thromboembolic events ranged from 2.0% to 3.7% among patients with various subtypes of valve disease who were not taking oral anticoagulation and from 1.1% to 3.1% among those who were anticoagulated, Line Melgaard, PhD (Aalborg University Hospital, Denmark), reported at the European Heart Rhythm Association Congress 2019 here last week.

Use of oral anticoagulation was associated with a lower thromboembolic risk for each subtype of valve disease studied, both at 1 year and 3 years.

“Patients with EHRA type 2 valvular heart disease [are] a heterogeneous group of patients with several different valvular heart diseases and various disease severity,” Melgaard said. “The thromboembolic risk in this group of patients is generally high, but it varies according to the specific valve disease. Also, many of these patients have several comorbidities and possibly it is not only the valve disease itself but also the coexisting risk factors that are important regarding this risk of thromboembolism.”

That issue, as well as the optimal anticoagulation strategy for patients with each subtype of valvular heart disease, remains to be studied further, she concluded.

‘Nonvalvular’ on the Outs

Patients with A-fib have typically been classified as having either valvular or nonvalvular A-fib, with the recent pivotal trials of the non-vitamin K antagonist oral anticoagulants (NOACs) focusing on the latter group. But definitions of nonvalvular have varied, and in fact, many patients with some type of valvular heart disease were included in the trials, which generally excluded patients with moderate-to-severe mitral stenosis and prosthetic heart valves.

In the latest European Society of Cardiology (ESC) guideline on managing A-fib, the terms valvular and nonvalvular were replaced by specific valve conditions, Melgaard noted. Today, she added, it’s generally accepted that these terms are outdated. The recent update to the US A-fib guideline addressed this issue as well, explaining that nonvalvular does not mean that patients are free from valvular disease, just that they don’t have moderate-to-severe mitral stenosis or a mechanical heart valve.

My feeling is that cardiologists are not sufficiently concerned about the efficacy of NOACs in these groups of patients to avoid using them in the absence of necessary targeted trials. Robert Storey

An international consensus document published in August 2017 established the EHRA heart valve classification to help clarify how patients with A-fib and various types of valve disease should be treated. EHRA Type 1 includes patients with moderate-to-severe mitral stenosis of rheumatic origin or a mechanical heart valve, who should be anticoagulated with a vitamin K antagonist (VKA). EHRA Type 2 includes patients with all other types of valve disease, who can be anticoagulated with either a VKA or a NOAC.

The proportion of patients receiving oral anticoagulants ranged from 55% to 68% across groups. Thromboembolic risk varied as well, although Melgaard noted that the study was not designed for between-group comparisons.

Dedicated trials of NOACs in patients with EHRA Type 2 valve diseases are lacking, but, according to ESC spokesperson Robert Storey, DM (University of Sheffield, England), that’s not standing in the way of their use in these groups.

“My feeling is that cardiologists are not sufficiently concerned about the efficacy of NOACs in these groups of patients to avoid using them in the absence of necessary targeted trials,” he told TCTMD. “That is because these patients with these valve diseases are generally very elderly with other comorbidities that place them at high risk of intracranial hemorrhage, and it’s clear that NOACs are associated with less intracranial hemorrhage risk compared to vitamin K antagonists.”

One particular valve situation that is getting dedicated studies is post-TAVR treatment, for which there is still uncertainty about optimal therapy, Storey said.

What is more certain, he said, is that patients with valve diseases represent a higher-risk group in which oral anticoagulation should be used.

“All atrial fibrillation patients should be thoroughly assessed and counseled regarding anticoagulant therapy and encouraged to take it unless there’s very good reason,” he said. “And if they have coexistent valvular disease, so these EHRA Type 2 valve conditions, that is a marker of more extensive comorbidity and risk, so it’s a further reason to particularly strongly advocate anticoagulant therapy in that cohort.”

He added that there’s nothing in Melgaard’s analysis to discourage use of NOACs in these patients.

Nonetheless, “anticoagulation appears to reduce the risk of events in the data set that we’ve seen. That is reassuring,” he said, adding that “the type of anticoagulant does not seem to affect outcomes based on the randomized trials that are available.”

FDA Warns of Cybersecurity Vulnerabilities With Some Medtronic Implanted Devices

DOACs in Patients With Mitral Stenosis and A-fib: Analysis Suggests a Benefit