HALT on imaging might be most responsive to treatment if detected within the first year of implantation, say researchers.

BOSTON, MA—Subclinical thrombi on transcatheter aortic valves becomes more “organized” the longer the implanted valve remains in vivo, a finding that may have implications for the potential treatment of hypoattenuated leaflet thickening (HALT), according to the results of new pathology study presented at TCT 2022.

Organized thrombus, a compact structure of acellular and cellular components infiltrated with collagen and other cells, is less amenable to treatment, say researchers.

“It underscores the need for early detection of HALT in patients,” said senior investigator Aloke Finn, MD (University of Maryland Medical Center, Baltimore and CVPath Institute, Gaithersburg), during a morning press conference at the meeting. “At greater than 1 year, you have these organized thrombi, which are unlikely to resolve with anticoagulation therapy.” 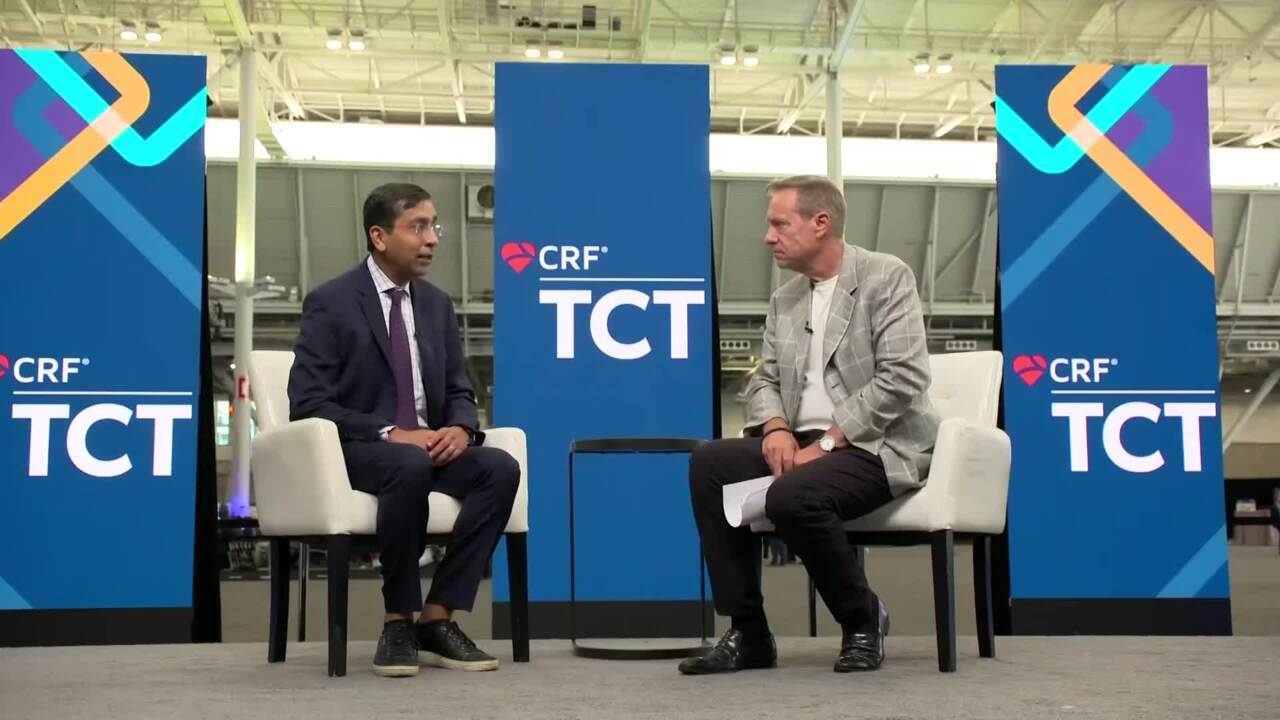 Subclinical leaflet thickening and reduced leaflet motion with bioprosthetic aortic valves has been documented and debated since it was first detected in 2015. What it means clinically, however, is not currently known, with researchers uncertain if it is a benign finding that resolves in time or if it may lead to adverse clinical outcomes, including valve breakdown.

Several clinical trials, including GALILEO and ATLANTIS, showed that oral anticoagulation (OAC) could reduce subclinical thrombosis, but its use did not reduce the risk of adverse clinical outcomes. In fact, the GALILEO trial showed that a rivaroxaban-based strategy in TAVI-treated patients increased the risk of death, thromboembolic complications, and bleeding compared with an antiplatelet-based treatment strategy. An observational study published last year showed there was no difference in clinical outcomes after a median follow-up of 3.25 years, and while symptomatic hemodynamic valve deterioration was more common in patients with HALT, the rate of valve failure did not differ between groups.

Acute or Just Getting Organized

In an attempt to provide greater granularity to the field, Finn, along with lead investigator Yu Sato, MD (CVPath Institute), turned to microCT, which can provide much greater resolution, to further understand the pathophysiology of HALT and to identify its various stages. “[MicroCT] is really just an experimental technique,” said Finn. “Clinical 4D-CT is the gold standard for detecting HALT, but we wanted to see if greater resolution could give us further detail.”

To do so, they evaluated 123 explanted self-expanding valves taken from patients who participated in 11 clinical trials. The explanted valves represented less than 2% of patients in the studies, where the rate of clinical thrombosis ranged from zero to 1.3%. After excluding 13 valves from patients with infective endocarditis and those where TAVI was performed in a surgical valve, there were 110 valves available for analysis, including 36 valves studied with microCT.

In terms of the results, leaflet thickening was seen more frequently in valves that had been implanted longer. For devices removed within 30 days of implantation, all detected thrombi were classified as acute. For valves explanted between 30 days and 1 year, the majority of leaflets with HALT had organizing thrombus, although there was evidence of acute and organized thrombi. For valves implanted for more than 1 year, the vast majority was also organizing or organized.

“The importance comes in knowing whether the thrombi are acute or organized,” said Finn. “Acute thrombi will resolve with anticoagulation.” For this reason, treatment might be most effective if started within the first year after implantation in patients with HALT, he said.

Rebecca Hahn, MD (NewYork-Presbyterian/Columbia University Irving Medical Center, New York, NY), one of the panelists during the late-breaking science discussion, pointed out that HALT is an evanescent finding, one that can come and go. While the study identified acute thrombus—the type that responds to oral anticoagulation—on devices explanted within 30 days, it’s also possible these thrombi could resolve on their own.

From a clinical perspective, Raj Makkar, MD (Cedars-Sinai Medical Center, Los Angeles, CA), said that if it was possible to differentiate acute thrombus on imaging, people might be inclined to treat it.

“It’s the time period, that is when anticoagulation is most effective,” he said. If HALT is later linked to structural valve deterioration, and researchers continue to study the long-term impact of HALT on the valve’s durability, “the question then is whether we should be doing trials in younger patients with low risk for bleeding? Is that a target population to study anticoagulation?”

Michael Young, MD (Dartmouth-Hitchcock Medical Center, Lebanon, NH), who spoke with the media during the morning press conference, said that in clinical practice they do not routinely assess patients with CT imaging in follow-up. Changes in hemodynamics or valve performance on echocardiography, as well as patient symptoms, would warrant follow-up CT, he said.

If HALT is detected, said Young, they will prescribe oral anticoagulation.

Subclinical Thrombosis After TAVI Benign, at Least to 3 Years

Apixaban Curbs Subclinical Thrombosis After TAVI in Patients Without Prior OAC