The findings from TREAT AF, a small, sham-controlled trial, represent “a pretty exciting proof of concept,” one expert says. 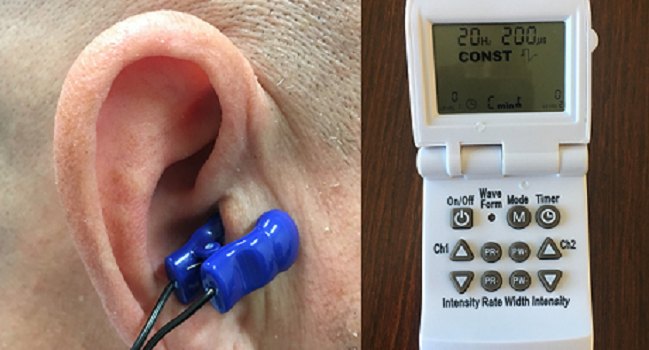 Moreover, the approach reduced serum levels of the inflammatory cytokine tumor necrosis factor-alpha by 23% compared with the sham group (ratio of medians 0.77; 95% CI 0.63-0.94), which is consistent with the known anti-inflammatory effects of VNS, he said.

“Our results support the emerging paradigm of noninvasive neuromodulation to treat AF,” Stavrakis said during his presentation. “Further studies are required to optimize patient selection and discriminate, at baseline, between responders and nonresponders in order to maximize the efficacy of this novel, noninvasive therapy.”

Andrew Krahn, MD (University of British Columbia and St. Paul’s Hospital, Vancouver, Canada), one of the chairs of the late-breaking clinical trial session at which Stavrakis presented the results, noted to TCTMD that several issues need to be worked out before this approach could be applied clinically: dosing, duration, tolerability, and patient selection.

“This is a single-center study. We need large-scale, comparative data to turn this into clinical practice,” he said. “But it’s a pretty exciting proof of concept. So I’m hoping that they are plugged into processes to fast-track the ability to do a proper comparative study.”

If this type of technology were to become available for patients with A-fib, Krahn said, it would be potentially useful in people who do not want to take medications to reduce their arrhythmia burden, fail medical therapy, or don’t want to undergo ablation. “That population is just looking for something less invasive than ablation to try to mitigate how bad their AF is, but when you look at the scope of atrial fibrillation, that’s still a big population,” he said.

In introducing the study, Stavrakis noted that prior animal research has shown that modulation of the autonomic nervous system using VNS suppresses A-fib. A previous proof-of-concept study in anesthetized patients with paroxysmal A-fib demonstrated that transcutaneous stimulation of the auricular branch of the vagus nerve at the tragus both shortened A-fib duration acutely and had an anti-inflammatory effect, he said.

TREAT AF was designed to evaluate the effect of chronically applying the treatment. The trial randomized 53 patients with paroxysmal A-fib to active stimulation through a clip attached to the tragus or sham stimulation through a clip attached to the ear lobe. Patients were instructed to apply the clip for 1 hour each day. VNS was delivered using the Parasym device, with the settings adjusted to not induce bradycardia.

Adherence to the stimulation protocol—defined as missing no more than four sessions per month—was 75% with active treatment and 83% with the sham, a nonsignificant difference. Those figures are similar to rates seen in studies of medical therapy, Stavrakis pointed out.

A-fib burden—the proportion of time spent in A-fib over a 2-week monitoring period using a continuous ECG patch—was measured at baseline, 3 months, and 6 months. Over the course of the study, the burden ticked up in the sham arm and down in the treatment arm, landing at 2% in the active treatment arm and 11% in the sham arm.

Total A-fib duration at 6 months was reduced by active VNS, whereas the “longest daily AF duration was no different between the two groups, suggesting that tragus stimulation suppressed the initiation but had no effect once the AF episode started,” Stavrakis said.

In terms of safety, two patients—one in each group—progressed to persistent A-fib and underwent cardioversion. There were no device-related side effects.

The increase in A-fib burden in the sham arm was probably due to normal progression of the disease, he noted. He added, however, that it could also have been caused by potential proarrhythmic effects of electrical stimulation, citing animal studies.

What has been learned from TREAT AF, Chen concluded, is that transcutaneous VNS “could suppress paroxysmal AF in humans, possibly due to neural remodeling, but we have to be mindful that skin sympathetic stimulation might be proarrhythmic. This is important for all future clinical trials.”

Further research, Stavrakis said, needs to be done to identify the optimal amount of stimulation needed to achieve the best outcomes, which could be shorter or longer than the hour used in the trial. He added, however, that compliance needs to be considered when exploring this issue, because patients are more likely to do something of shorter duration.

But the most important next step, he said at a press conference, is to identify those patients who are most likely to respond to the treatment and then perform a larger RCT in this group.