For patients at too high of a risk for surgery, TMVR could provide a reasonable alternative, experts say. 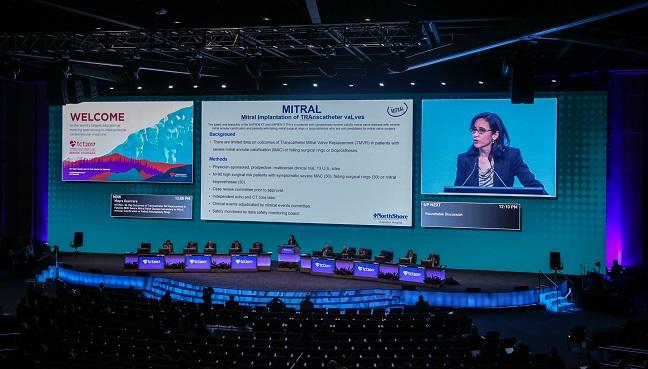 DENVER, CO—Transcatheter mitral valve replacement (TMVR) in patients with either failed annuloplasty rings or severe mitral annular calcification (MAC) is feasible in selected individuals who are at too high risk for surgery, according to new data presented at TCT 2017.

There are “limited data [on TMVR outcomes] in patients with severe MAC or failing surgical rings or bioprostheses,” explained presenter Mayra Guerrero, MD (Evanston Hospital, IL), during a First Report Investigations session last week. A recent study showed that implanting a transcatheter heart valve into the mitral position after a surgical ring fails—called a valve-in-ring (ViR) procedure—may be a better option than medical therapy alone for these high risk patients, but there were complications.

For the MITRAL study, Guerrero and colleagues screened 36 patients with a failed surgical ring and 92 patients with MAC for TMVR. Of these, 30 from each group were approved for treatment, with many excluded for risk of embolization and/or left ventricular outflow tract (LVOT) obstruction.

All ViR patients treated via transseptal access, and technical success was achieved in 70%—this was driven by a need for a second valve in six patients, although each of these patients achieved good outcomes. There were two in-hospital deaths, and procedural success at 30 days was 62%.

In the MAC arm of the study, half were treated using transeptal or transapical access while half were treated via transatrial access. There were five in-hospital deaths—including four due to noncardiac-related reasons and three from the transatrial group—and no additional deaths at 30 days. Technical success was 73.3% upon leaving the cath lab, given that three patients had LVOT obstruction. Procedural success at 30 days was 46%. There were four patients who needed a new pacemaker during the procedure, three of them during transatrial procedures.

At 30 days, one ViR and one MAC patient needed reintervention while one and three patients, respectively, reported hemolytic anemia.

Fifteen patients treated with non-transatrial TMVR, of which seven received alcohol septal ablation to increase the likelihood of procedural success. Thirteen of the 15 patients were discharged alive from the hospital, with 12 surviving to 30 days and one alive at home on postoperative day number 13 at time of the TCT presentation (not yet due to 30 day follow-up).

At 30 days, most patients had none or trace mitral regurgitation, and patient symptoms improved substantially according to NYHA classification for both study groups.

“Transeptal access for ViR can be achieved in most patients,” Guerrero said. “These results suggest that [transeptal] ViR is a reasonable alternative for high risk patients.” Calling TMVR in patients with MAC “a challenging procedure associated with complications,” she added that “outcomes have improved with better patient selection and techniques.”

Preemptive alcohol septal ablation weeks ahead of the TMVR facilitates a successful procedure in selected patients, Guerrero continued, and “cardiac CT analysis is key to improve patient selection and outcomes.” Lastly, the “transatrial approach allows resection of anterior leaflet to decrease LVOT [obstruction] risk and sutures to decrease embolization risk, but is more invasive and associated with [morbidity and mortality].”

Ultimately, TMVR in patients with MAC “may become a reasonable alternative for high-surgical-risk patients with favorable anatomy, but techniques require further refinement,” she concluded.

In a panel discussion after the presentation, panelist and cardiothoracic surgeon David Adams, MD (Mount Sinai Medical Center, New York, NY), said that “decalcification is an uncommon procedure even among skilled mitral surgeons.” It's not a question of “could you decalcify,” he continued. “You could always decalcify limited areas of calcification. The real question is: could you drive sutures around the valve? And if you can’t, then a sutureless valve will bail you out of that situation, but of course as this trial elegantly shows, ideally we would know that beforehand.”

Another member of the panel, Alec Vahanian, MD (Hôpital Bichat, Paris, France), said that screening patients with calcified annuli is of utmost importance when determining whether to do TMVR, and he pointed to the fact that more than two-thirds of the patients with MAC screened in the MITRAL study were excluded. “The work you are doing with CT plus echo is fantastic,” he added.

For the future success of ViR procedures, Guerrero ended the discussion with a plea to the surgeons who implant rings to “use a ring that we can use in the future for a valve-in-ring procedure. I would try to stay away from bands, flexible bands, and I would stay away from very rigid rings. Please give us one we could work with.”