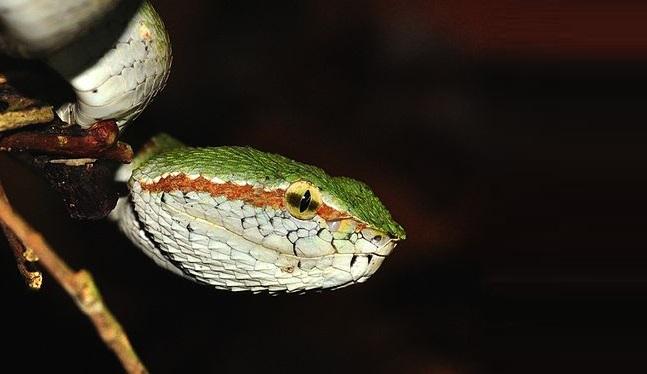 “To our knowledge, this is the first study to design small-mass peptides derived from snaclecs [snake venom C-type lectin proteins] with antithrombotic activity that target platelet GPVI receptor with atypical binding epitope,” they write.

This would not be the first time that reptilian fluids have been used to treat human conditions—the diabetes drug exenatide was developed from the saliva of the Gila monster, while scientists have previously identified antithrombotic and thrombolytic properties in a component of the venom from a pit viper found in North and Central America.

Since bleeding is the most common yet not fully explained side effect of glycoprotein IIb/IIIa inhibitors and “because GPVI expression deficiency is usually only associated with slightly prolonged bleeding times, it is worth to develop novel GPVI antagonists for thrombogenic diseases,” Huang and colleagues continue.

The compound they studied, Troα6/Troα10, was found to specifically inhibit collagen-induced platelet aggregation by interrupting the binding of platelet GPVI “with a minimal bleeding side effect,” according to the authors. This “provides a promising novel molecular skeleton for designing the new class of antithrombotic agents targeting platelet GPVI.”

Their findings were published online today ahead of print in Arteriosclerosis, Thrombosis, and Vascular Biology.

While the findings are interesting, they are “not really that novel,” Sorin Brener, MD (New York Methodist Hospital, Brooklyn, NY), who was not involved with the study, told TCTMD.

The fact that the venom of this snake contains so many antithrombotic properties is intriguing but logical since snakes use their venom to kill, he observed.

Still, people who lack the GPVI receptor “don’t bleed a lot, . . . which suggests the fact that there is some sort of redundancy, and so there are other receptors that take over and provide the same so-to-speak response in terms of coagulation,” Brener commented. As such, it remains unclear whether or not an antibody manufactured in this fashion will have a clinical effect. “But it's promising and convincing,” he said.

The next logical step would be to create the antibody, either a chimeric one as was done with abciximab “or another kind of antibody that would be tolerated by humans and would not bind to another receptor which you don’t know about,” Brener concluded. “Then try to test it in vitro first and then in in vivo models.”