An ambitious trial in Denmark that screened over 25,000 men linked simple tests with lives saved. But questions remain. 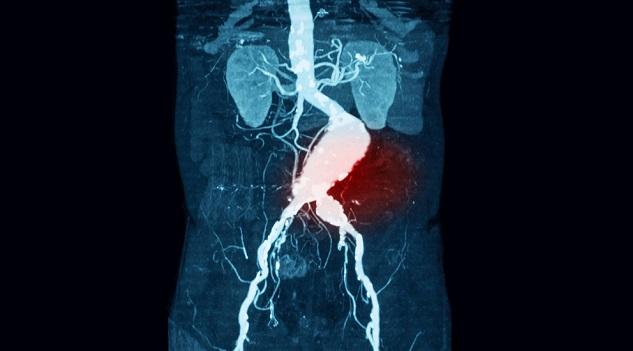 BARCELONA, Spain—An ambitious trial looking at population-based screening for abdominal aortic aneurysm (AAA), peripheral artery disease, and hypertension in men was associated with a significant reduction in all-cause mortality and should prompt policy makers to consider implementing such programs, researchers said here at the European Society of Cardiology Congres 2017.

The VIVA trial invited all men aged 65-74 living in central Denmark to have such screenings, ultimately allocating approximately 25,000 men to the screening and nonscreening groups. Just four men were lost to follow-up at a median of 4.4 years.

Screening was conducted by nursing teams equipped with portable ultrasound scanners, bedside cholesterol measurement devices, portable Dopplers, and blood pressure monitors. AAAs were detected in 680 men (3.6%), of which 61 were 5.5 cm or larger. Peripheral artery disease was detected in 2,052 (10.9%) and hypertension in 1,962 (10.5%). Sixty patients found to have AAA of at least 55 mm in size; eight opted not to undergo repair.

At follow-up, 2,566 participants (10.2%) in the screening group had died, compared with 2,715 (10.8%) in the nonscreening group, yielding a hazard ratio of 0.92 (95% CI 0.88-0.98). The number needed to screen to prevent one death was 169. No significant differences were seen, however, for the outcomes of abdominal aortic aneurysm or cardiovascular mortality.

Importantly, said Lindholt, there were no serious negative side effects of the screening program, including no post-operative deaths, CNS bleeding, diabetes mellitus, cancer, uremia, quality of life, overdiagnosis, or overtreatment.

In an accompanying editorial, Chadi Ayoub, MBBS, and M. Hassan Murad, MD (Mayo Clinic, Rochester, MN) point out that the number needed to screen compares “favorably” with common cancer screening initiatives, which tend to need to screen many more subjects to prevent one death. However, they question the authors' decision to bundle two screening tests known to translate into reduced events (AAA and hypertension screening) with ankle-brachial index screening, “which to date has not shown to be effective.” Indeed, the US Preventive Services Task Force determined that the evidence was insufficient to recommend for or against on ankle-brachial index screening, although other groups give have given the test different levels of support.

They continue: “The fact that ABI is being offered legitimacy by such bundling is concerning.”

Overall, they write, the VIVA trial presents thought-provoking findings,” but “implementation of this triple screening intervention requires more proof than presented in this study.”

Cardiovascular trials, in general, have suffered from under-representation of women and a key shortcoming of the trial, one identified in an accompanying editorial, was that it only offered screening to men. This decision, said Lindholt, is explained by the fact that men are significantly more likely to develop AAA than women.

“We did the study where we thought there would be the benefit with the most cost-effective testing and we had some pilot studies searching for AAA in women [that confirmed] the prevalence is still very, very low in women,” he told TCTMD. That said, pilot studies in the run-up to VIVA demonstrated that PAD prevalence was comparable in men and women, he admitted. “So that was a bit surprising.”

Investigators have no plans to do a similar screening study in women but rather are moving forward with what Lindholt called a “multifaceted” screening test that could be applied to both women and men.

Speaking with TCTMD, Sarah Clarke, MD (Cambridge Heart Clinic, England), said that the lack of women in the study was the “first thing” she noticed, although she acknowledged that AAA is far less common in women.

Screening programs such as the one described are relatively cheap to do, she noted, although they would require some degree of staffing and coordination. Whether such a strategy would be cost-effective in the United Kingdom would need to be studied, she said. In VIVA, the average screening cost was €2148 per quality-of-life year gained. “We’d have to now look at that from a public health perspective and what the cost would be in the context of everything else that the National Health Service is looking at in the moment, in the UK,” she said.

Also commenting on the study for TCTMD, Jacob Thorsted Sørensen, MD, PhD (Aarhus University Hospital, Denmark), said that he would want to know more about how the screening was done and how it could be applied at the population level. “But I think what really is interesting here is that you have a potentially high-risk population, which you are able to identify with relatively simple means, and there were no adverse effects of the screening, compared to cancer, for example, with a lot of extra investigations and needle biopsies and so on,” he explained. “So this is, based on the presentation here, very promising.”