This blog aims to capture headline news and random tidbits on the ground at ACC 2017. It is updated throughout the day. 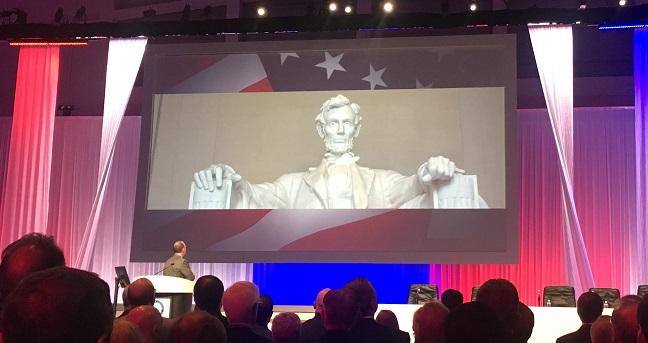 WASHINGTON, DC—Missing from the list of artistic callings listed by David J Skorton, MD, secretary of the Smithsonian Institute, in this morning‘s keynote was live theatre, or—as close as you can get to it at a cardiology meeting—an interventional cardiology debate. The topics batted around onstage at today’s midday feud included enough drama and dueling one-liners to bring down the house.

The topics batted around onstage at today’s midday feud included enough drama and dueling one-liners to bring down the house.

James Fang, MD (University of Utah, Salt Lake City), and Ajay Kirtane, MD (NewYork-Presbyterian/Columbia University Medical Center, New York), debated revascularization in ischemic cardiomyopathy in the wake of the long-term outcomes from STICH. Fang argued persuasively that there is nothing in STICH to support an invasive approach, to which Kirtane replied, “Repeat after me: an invasive approach does not equal PCI.” What’s warranted in the wake of STICH, said Kirtane, is at the very least working up coronary artery disease in ischemic cardiomyopathy patients. 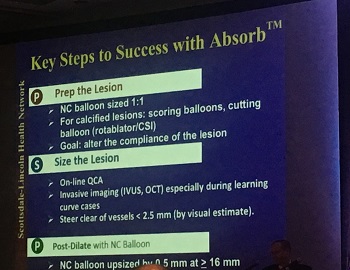 David Rizik, MD (Scottsdale Healthcare Osborn Medical Center, Scottsdale, AZ), and Frederick Welt, MD (University of Utah, Salt Lake City), debated bioresorbable scaffolds, a contest handily won by Rizik when he compared BRS to a fornicating zebra, and showed an astonishing photograph to illustrate his point. Of course a bioresorbable scaffold makes sense, he argued, but only if physicians follow optimal stenting practices—or PSP, as the device manufacturer has dubbed it, referring to lesion preparation, vessel sizing, and postdilatation.

“Every intervention should be performed as if you are doing it on your parents,” Rizik quipped.

Welt, in turn, opened by saying: “I feel like I lost the debate with the zebra slide.”

His key point, however, was that none of the promises of bioresorbable scaffolds have yet panned out. What’s more, the whole notion of having a stent that disappears with time made sense during the first few “ticking time bomb” years of drug-eluting stents. Now, Welt argued, “it may be that current generation DES are just too good. “ With the first-generation DES you could make the argument that the metal needed to disappear, he added “but it’s harder to make that argument now.”

The third debate drew some of the loudest laughs from the audience. Dimitrios Karmpaliotis, MD (NewYork-Presbyterian Hospital/Columbia University Medical Center), took the stage to debate Eric Bates, MD (University of Michigan, Ann Arbor, MI), on whether or not chronic total occlusions (CTOs) should be revascularized and started by asking the audience whether they would want all of their major epicardial arteries closed, partly open, or all open? When the entire audience voted for all open, he raised his hands. “Okay! I’m done.”

Bates, who went second, quipped that he was selected to debate CTOs because he (Bates) was the only person they could find for an interventional debate who had no conflicts of interest (“They scraped the bottom of the barrel.”)

His key point—there are no positive randomized trials supporting CTO recanalization, and rates of successful CTO recanalizations among most operators hover at 50% or less. In the right hands—operators who have a 90% success rate or higher, this is a clinical trial that still needs to be done.

On this, Karmpaliotis agreed that a US-based trial was sorely needed, although some important answers will come from DECISION-CTO, being presented here tomorrow. Bates also made the point that viability tests should also be required as a precursor to CTO recanalization—another point on which Karmpaliotis agreed. Of course, he said, “We don’t want to revascularize dead meat.”

“Science is not enough to solve the world’s challenges—we need the social sciences, arts, and humanities as well.” 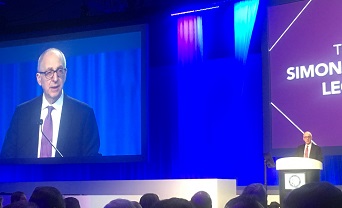 This is the last thing many attendees of the American College of Cardiology (ACC) 2017 Scientific Session expected to hear after packing themselves and their coffee breath into the opening session this morning, chomping at the bit to hear late-breaking clinical trial results. But according to cardiologist David J. Skorton, MD, secretary of the Smithsonian Institution, who delivered the 2017 Simon Dack Lecture, the arts play a critical role in nurturing physicians careers—as well as their lives.

For one, he explained, the arts can provide practical contributions to problem-solving. For two, “they hold great inherent value as the best way to understand ourselves and our world, and what it means to be fully human.”

Dack pointed out that a large proportion of physicians are also musicians, artists, sculptors, and poets. Artistic disciplines, he argued, provide physicians with a wider viewpoint and ultimately help both them, and society more broadly, understand medical ethics.

Heart sounds are musical and inspired me also to go into #cardiology Dr. Skorton! We have this in common #ACC17 @ACCinTouch #artsinmedicine

That may be well and good, the polite but muted applause suggested, but what about the actual science? 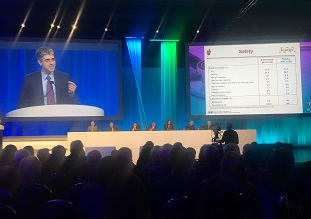 Enter the first of the ACC 2017 late-breaking clinical trials. Kicking off the session were the eagerly anticipated final results of FOURIER, the 27,500-patient clinical trial testing evolocumab (Repatha, Amgen) on top of usual care in patients with atherosclerotic cardiovascular disease. As reported in detail by TCTMD’s Michael O’Riordan, FOURIER showed the PCSK9 inhibitor reduced the risk of cardiovascular death, MI, stroke, hospitalization for unstable angina, or coronary revascularization—the study’s primary endpoint—by 15% when compared with placebo, an absolute difference of 1.5%. Find details on FOURIER here.

Questions now will inevitably turn to how to most patients can pay for this drug.

During the discussion following the presentation, Valentin Fuster MD, PhD (Mount Sinai Medical Center, New York, NY), said he was somewhat underwhelmed by the 1.5% absolute risk reduction, adding that he was happy to see the curves continue to diverge. In this case, Fuster said, “The future is brighter than the present.” 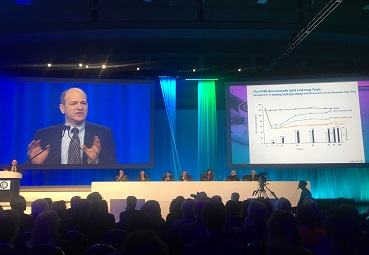 Another PCSK9 inhibitor, bococizumab, also got its moment in the limelight—potentially its last. As Yael Maxwell reported here today, the SPIRE 1 and 2 trials showed that bococizumab had no impact on cardiovascular events among patients with LDL lower than 100 mg/dL, but did significantly reduce the risk of events in patients with higher baseline LDL by 21%.

The drug, however, will not make it to market—back in November 2016, Pfizer announced it had discontinued development of bococizumab. The generation of antidrug antibodies, observed in the SPIRE trials, are believed to be behind an attenuation of LDL cholesterol-lowering affects seen in 10-15% of patients over time. 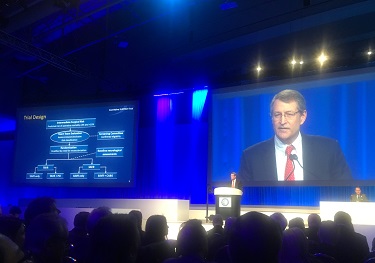 As you can read in Todd Neale’s coverage, the 2-year rate of all-cause death or disabling stroke in SURTAVI was 12.6% in patients who underwent TAVR with either the first-generation CoreValve prosthesis or next-generation Evolut R (both Medtronic) and 14.0% with surgery, a difference that met criteria for noninferiority. Full details on SURTAVI here.

Some key points—SURTAVI enrolled a slightly lower-risk group than PARTNER II. Expect to hear more about that in Todd’s update. There was a 26% pacemaker implantation rate with TAVR, but according to Reardon, it did not affect mortality.