This blog aims to capture headline news and random tidbits on the ground at ACC 2017. It will be updated throughout the day. 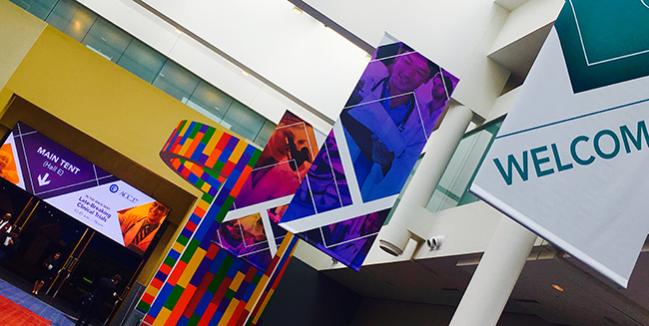 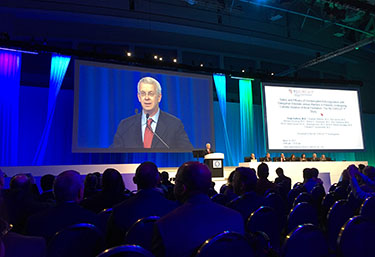 RE-CIRCUIT enrolled 704 patients at 104 sites in 11 countries—all patients were scheduled to undergo ablation for atrial fibrillation. The question at hand: could patients take uninterrupted non-vitamin K oral anticoagulation continuously before and after their procedures, with uninterrupted warfarin as the comparator? Here as in other settings before, dabigatran came up with the win. Started 4 to 8 weeks prior to ablation and used continuously out to the 8-week mark, dabigatran was associated with less major bleeding and was equal to warfarin with regard to  minor bleeding, stroke, and several composite endpoints.

There were no thromboembolic events in either group and the only TIA occurred in a patient taking warfarin, presenter Hugh Calkins, MD (Johns Hopkins Hospital, Baltimore, MD), said here. “The availability of the specific reversal agent idarucizumab, while not needed in any patient in this trial, further motivates the adoption of uninterrupted dabigatran as the preferred anticoagulation strategy in patients undergoing AF ablation.” 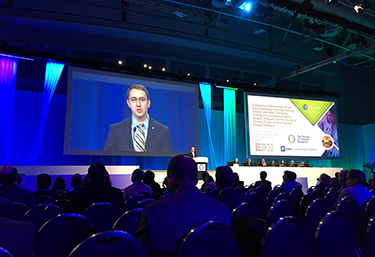 A study derived from a Society of Thoracic Surgeons (STS) Adult Cardiac Surgery Database may be closely watched by surgeons and interventionalists alike. The analysis looked at whether surgically closing the left atrial appendage (LAA), as an add-on procedure during cardiac surgery, reduces the rate of thromboembolism. As Daniel J. Friedman, MD (Duke Clinical Research Institute, Durham, NC), showed here, an analysis of 10,534 records showed that 37% of patients in the STS database had their LAA closed during CABG, aortic valve surgery, or mitral valve surgery between 2011 and 2012. In all, 1.6% of these patients were subsequently hospitalized for thromboembolism in the ensuing 12 months, compared with 2.5% of patients who underwent similar surgeries but did not have their LAAs surgically closed.

For those hoping to see these results give a leg up to transcatheter LAA closure devices like the Watchman, Friedman addressed those hopes head-on. The findings cannot, he stressed, be compared with “different techniques” for closing the LAA.

Elsewhere, in the SPAIN trial, a closed loop stimulation successfully reduced vasovagal syncope episodes sevenfold compared to a control group in which this pacemaker programming was turned off.

GIFT looked at genotype-based dosing of warfarin in 1,598 subjects undergoing hip or knee arthroplasty, showing that adjusting warfarin dose according to whether patients were carriers of specific polymorphisms led to fewer major bleeds and fewer subjects developing INR levels of 4.0 or greater. 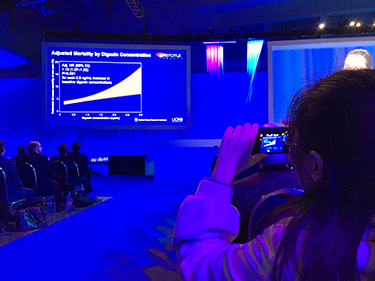 Results for ARISTOTLE were far less rosy, confirming earlier studies underlining the dangers of digoxin in patients with atrial fibrillation.

I’ve heard lots of people saying how much they like the compact 3-day meeting the American College of Cardiology Scientific Session has become, but by day 3, it’s already feeling like 5.

Here’s some of what we learned from the late-breaking clinical trials (LBCTs) this morning. 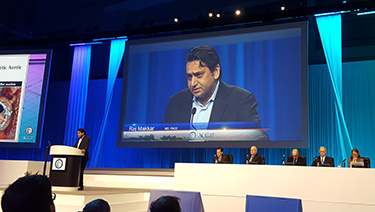 Roughly 12% of patients who undergo aortic valve replacement, either with TAVR or surgery, develop subclinical valve leaflet thrombosis, according to pooled results from the RESOLVE and SAVORY registries. Among the 720 patients who received TAVR and 130 who underwent SAVR, CT scans showed subclinical leaflet thrombosis in 13.6% of TAVR-treated patients and 3.0% of SAVR-treated patients. That difference will no doubt catch the eye of surgeons, since the leaflet mobility/thrombosis issue is typically talked about as one “that affects both surgical and transcatheter valves.” Of note, leaflet thrombosis was more common among patients taking dual antiplatelet therapy (14.8%) and approximately 3% among patients taking non-vitamin K antagonist anticoagulants (NOACs) or warfarin. 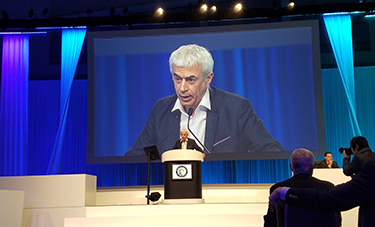 Also in the TAVR space, a small study looking brain MRIs after transcatheter aortic valve procedures has found that as many as one in four elderly patients develops new cerebral microbleeds. What’s more, microbleeds, both before or after TAVR, appear to be linked to deficiencies in cognition and memory on questionnaire based assessments. Previous cardiovascular intervention, prolonged exposure to anticoagulation, prior bleeds, balloon postdilation, and longer fluoroscopy exposure during the procedure all seem to increase the risk of microbleeds.

Investigators led by Michael Mack, MD (Heart Hospital Baylor Plano, Plano, TX), did see a trend towards fewer large-volume infarcts with protection, but this finding was not statistically significant. These findings, he noted, have echoes in the TAVR space, where the recent SENTINEL trial also missed its primary endpoint of reduction in new brain lesion volume on MRI. 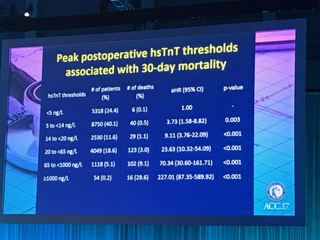 Switching away from TAVR, a massive study conducted at 23 hospitals in 13 countries is shedding some light on the utility of high-sensitivity Troponin T (hsTnT) as a means of tracking the risk of 30-day mortality following noncardiac surgery. VISION, presented by P.J. Devereaux, MD (McMaster University, Hamilton, Canada), suggests that almost one in five patients have increases of at least 5 ng/L in hsTnT following noncardiac surgery, and unrecognized myocardial injury may account for one out of four deaths that occur in the first 30 days after surgery. More than 90% of myocardial injury after noncardiac surgery goes undetected without troponin testing, Devereaux added.

Recall, while hsTnT tests have been approved in other parts of the world for some time, the FDA approved the first such test earlier this year.

Check back to TCTMD.com for full coverage of these trials and more.