The novel study may pave the way for more noninvasive imaging as the gatekeeper for complex coronary artery disease, experts say. 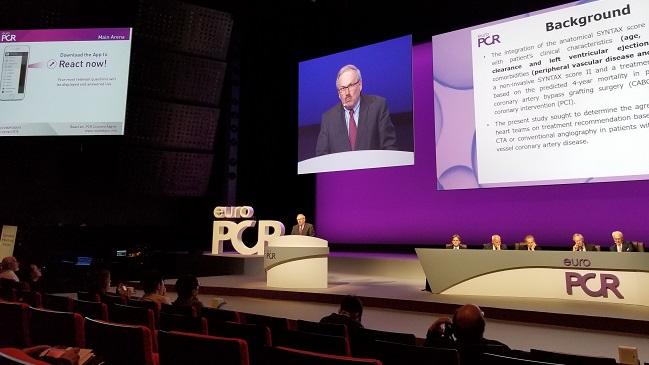 For the SYNTAX III REVOLUTION study, Serruys and colleagues randomized six heart teams from five countries to review imaging from 223 patients with left main or three-vessel disease—three of the teams only saw conventional coronary angiography and the other three only had access to noninvasive coronary CTA scans (GE Revolution) and fractional flow reserve derived from CT (FFRCT; HeartFlow)—and come up with a virtual treatment decision. Heart teams included a cardiologist, surgeon, and radiologist, and all physicians were unblinded to all available imaging before ultimately conducting PCI or CABG.

After evaluation of their respective scans, the randomized heart teams were in “almost perfect agreement,” reported Serruys, with their treatment decisions matched in 92.8% of patients (Cohen’s kappa coefficient 0.82; 95% CI 0.73-0.91). FFRCT, which was feasible in 196 patients, changed the treatment decision in 7% of patients—mostly from CABG to PCI.

The next step will be an outcomes trial of 100 patients to see what happens when the heart teams follow through with their treatment decisions remaining blinded to either the coronary angiography or CTA scans, Serruys reported. Patients will be evaluated at 1 month for safety and graft patency.

The New and Improved Heart Team

Many in the field mistakenly believe that the heart team concept grew out of TAVR, but it was actually first used in the original SYNTAX trial, he said. “It’s nice to see it come back to the SYNTAX trial in this . . . study.”

Serruys noted that the addition of a radiologist to the heart team is a novel concept. Over the 18 months that the trial was conducted, “the collaboration between these three individuals was a real pleasure,” he told TCTMD. “We are accustomed to the dialogue between the interventional cardiologist and the surgeon, but the surgeon was not accustomed to the dialogue with the radiologist, so the surgeon really during the trial discovered two things: the multislice CT scan and the FFRCT.”

Thus far, interventional cardiologists and coronary angiography have been “the gatekeeper between revascularization by PCI and surgery,” said panelist Emanuele Barbato, MD, PhD (Cardiovascular Research Center Aalst, Belgium), following Serruys’ presentation. But it’s likely that “as of tomorrow, the gatekeeper will be the radiologist by performing CT,” he said, adding that it’s an open question whether surgeons would “be happy” about this or would “still require coronary angiography before operating on these patients.”

Serruys said his team conducted a survey of surgeons and 83% said they could feasibly perform CABG based on CTA only. “The surgeons were very enthusiastic [and told] us many times that we will be able to operate on multislice scan alone,” he reported.

Likewise, cardiothoracic surgeon Mario Gaudino, MD (NewYork-Presbyterian/Weill Cornell Medical Center, New York, NY), who was not involved in the study, told TCTMD in an email that he is “excited” about the possibility of performing CABG with CTA only and has “no apprehension.” In his practice, “the number of cases [that] have CTA available for heart team discussion is very limited at the moment. I agree that this must increase and that a radiologist must be involved, in particular for left main disease and chronic total occlusion.”

Looking forward, Gaudino continued, “it is conceivable to think of CTA-based coronary bypass surgery.” More details are needed regarding its visualization of the distal coronary bed, which is limited with conventional angiography, “but it is very likely that technology will evolve very quickly,” he said.

Bypass surgery was born thanks to the development of coronary angiography. . . . If the imaging of the coronary arteries will change, surgeons will follow. Mario Gaudino

‘The Future is Here’

If there is one thing to take away from this trial, said Héctor M. Garcia-Garcia, MD, PhD (MedStar Washington Hospital Center, Washington, DC), who was not involved in the study, it is that coronary CTA will soon be the standard of care for deciding between CABG and PCI. “CTA has been here for a long time, so it's going to stay and be broadly adopted and embraced as a modality to really guide our clinical decisions,” he told TCTMD. “It is already doing so, it's just that this is a very specific set-up—it's in the context of three-vessel disease, left main disease, and the fact that these patients are discussed in a heart team-based approach.”

Throughout his experience working in Mexico, the Netherlands, and Switzerland, Garcia-Garcia said that generally these patients are at least evaluated by a heart team, although that might not always include a radiologist. Interventional cardiologists have been assessing coronary angiography “since the inception of the specialty,” he said, acknowledging, however, that most interventionalists are not experts at reading coronary CTA scans. “You are relying pretty much on the interpretation of the reading of a colleague and that is critical. That is actually the heart team approach. . . . You need the multidisciplinary approach to really evaluate all the aspects of the disease.”

Notably, however, a CT-based Syntax score is not completely analogous to one based on angiography, Garcia-Garcia explained. “They are not to be compared in a one-to-one fashion because not all of the variables that come from one versus the other are the same, not even in the number of variables that you read out from one versus the other,” he said.

FFRCT should also be looked at more closely in these patients in the future, he said. Generally, the same motion artifacts that render FFRCT infeasible also do the same to CTA, Garcia-Garcia explained, however, the former scan was less often available than the latter in this study. “They don't want to acknowledge here that they are losing 10% of the data or that the quality of the data is going to be limited in those 10% of patients, and it goes back to the inter- and intraobserver variability.”

This could be attributed to the lack of experience and training in reading CTAs for some heart team members, but it might also have something to do with the fact that even a single observer might provide “totally different” patient- and lesion-level Syntax scores in a patient upon reviewing the coronary angiography twice, he said.

The study is “pioneering work . . . but it’s just the very beginning,” Garcia-Garcia concluded.

“The future is here. We are going to be using this imaging modality more and more,” he continued, reminding his peers, however, that the PROMISE study of more than 10,000 patients showed no better clinical outcomes with CTA-based versus functional testing. “So just a word of caution that we should not be overexcited, as I am. . . . We have to also learn from that other study and apply those lessons to the follow-up study.”

CABG Bests PCI for 5-Year Survival in Biggest Analysis Yet, With Options for Left Main Disease