Only the many ongoing randomized clinical trials, some of which include A-fib patients, will be able to answer questions about antithrombotic regimens. 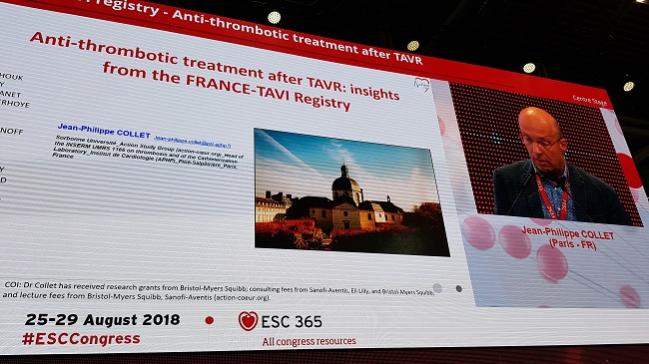 MUNICH, Germany—Among patients undergoing TAVR for the treatment of aortic stenosis, male sex, moderate-to-severe renal failure, and atrial fibrillation are independent predictors of death at 3 years, according to a new analysis of a large French registry. The use of oral anticoagulation, which was mainly prescribed for atrial fibrillation, was also an independent predictor of death in long-term follow-up, report investigators.

Paradoxically, the use of oral anticoagulation also was associated with a lower risk of valvular hemodynamic deterioration.

Despite the lowered risk of bioprosthetic valve deterioration with oral anticoagulation, Jean-Philippe Collet, MD, PhD (Sorbonne Université, Paris, France), told TCTMD the clinical significance of the echocardiographic findings are unknown. Regarding the predictors of mortality at 3 years, Collet said they performed multiple statistical analyses, and both oral anticoagulation and atrial fibrillation remained independent predictors of mortality.

However, he noted the registry data are not randomized and it’s possible unknown confounders might have influenced the results or could explain the relationship.

The new data from the FRANCE-TAVI registry, which were presented here during the late-breaking interventional session at the European Society of Cardiology Congress 2018, are “preliminary,” according to Collet. Only the ongoing randomized clinical trials—GALILEO, ATLANTIS, ENVISAGE, POPULAR, AVATAR, and AUREA, some of which include patients with atrial fibrillation—will be able to answer the question about the appropriate antithrombotic treatment regimen. Current clinical guidelines recommend dual antiplatelet therapy for 3 to 6 months after TAVR and there is no recommendation for oral anticoagulation in the absence of atrial fibrillation.

The results were published simultaneously online in the Journal of the American College of Cardiology.

In the FRANCE-TAVI registry, a multicenter, prospective database that included 11,469 patients who underwent TAVR in one of 48 hospitals between 2013 and 2015, the average patient age was 82.8 years, the logistic EuroSCORE was 17.8, and the median duration of follow-up was 428 days.

In contrast, oral anticoagulation use at discharge was associated with a significant reduction in the risk of bioprosthetic valve deterioration among the 2,555 patients with at least two echocardiographic assessments. The use of small bioprosthetic valves—those 23 mm or less—was associated with a more than threefold increased risk of valve dysfunction on echocardiography.

Patrick Serruys, MD, PhD (Erasmus Medical Center, Rotterdam, the Netherlands), one of the session panelists, highlighted the drawbacks of registry data, noting that patients who received an oral anticoagulant were very different from those who did not. “You have to ask how you can adjust for such a large difference in baseline characteristics and confounders,” said Serruys.

Still, based on the unadjusted hazard ratio—patients treated with oral anticoagulation had a 50% increased risk of death at 3 years compared with those not prescribed an oral anticoagulant—Serruys said the data are “convincing” and would suggest that the “patient using oral anticoagulants die more frequently.”

Like Collet, though, Serruys stressed the importance of waiting on the randomized trials before altering clinical practice. Asked about his current antithrombotic regimens for TAVR patients, Collet said he tries to enroll patients into one of the ongoing clinical trials.

“We have these data from this big registry, but it just calls for more evidence to come,” Collet told TCTMD. “Randomized trials are being done in a very high-risk patient population, but we’ll probably need to reassess [risks and benefits] in lower-risk patients because TAVR is coming to lower-risk populations. It’s going to be an ongoing investigation.”

The ARTE of Antiplatelet Therapy After TAVR: Bleeding Greater with Clopidogrel Plus Aspirin vs Aspirin Alone