Questions about when to drop aspirin in A-fib patients with indications for both DAPT and anticoagulation linger, however.

SAN FRANCISCO, CA—Using apixaban plus a P2Y12 inhibitor—but leaving off aspirin—reduces bleeding and hospitalization compared with vitamin K antagonist (VKA)-based regimens in A-fib patients who have ACS or are undergoing elective PCI. Effects are consistent regardless of patient presentation, a new analysis of the AUGUSTUS trial shows.

“The overall results indicate that AUGUSTUS is consistent across the three clinically important subgroups,” Windecker said at a press conference. So, he concluded, “anticoagulation with apixaban at the dose approved for stroke prevention in patients with atrial fibrillation, combined with a P2Y12 inhibitor without aspirin, should be the preferred treatment strategy in patients with atrial fibrillation and acute coronary syndrome, irrespective of whether they are treated medically or undergo PCI, and similarly in those patients who undergo elective PCI.”

Commenting for TCTMD, American College of Cardiology spokesperson B. Hadley Wilson, MD (Sanger Heart & Vascular Institute, Charlotte, NC), said the study “is really confirmatory about what we would call dual therapy being superior to triple therapy in patients who have a reason for anticoagulation, most likely atrial fibrillation, and then also have coronary disease and require a procedure.” 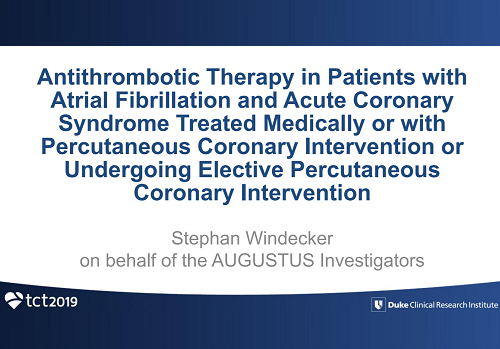 Wilson said this is an important area of research because many patients undergoing PCI require chronic anticoagulation. And, he commented, this analysis “really adds to the body of data in this area that NOACs and a P2Y12 inhibitor is the way to go in these patients.”

When a patient who has both an indication for chronic oral anticoagulation (often A-fib) and an indication for dual antiplatelet therapy (often stenting), it creates a situation in which triple antithrombotic therapy may be used. That, however, comes at the cost of increased bleeding, so researchers and clinicians have been searching for regimens that improve safety without compromising on efficacy.

Investigators have now evaluated all four commercially available DOACs in A-fib patients who are undergoing PCI in randomized trials—apixaban (Eliquis; Bristol-Myers Squibb) in AUGUSTUS, dabigatran (Pradaxa; Boehringer Ingelheim) in RE-DUAL PCI, edoxaban (Savaysa; Daiichi Sankyo) in ENTRUST-AF PCI, and rivaroxaban (Xarelto; Bayer/Janssen) in PIONEER AF-PCI. All have provided support for regimens that include a DOAC plus a P2Y12 inhibitor without aspirin, an approach that has been recommended in international consensus statements. 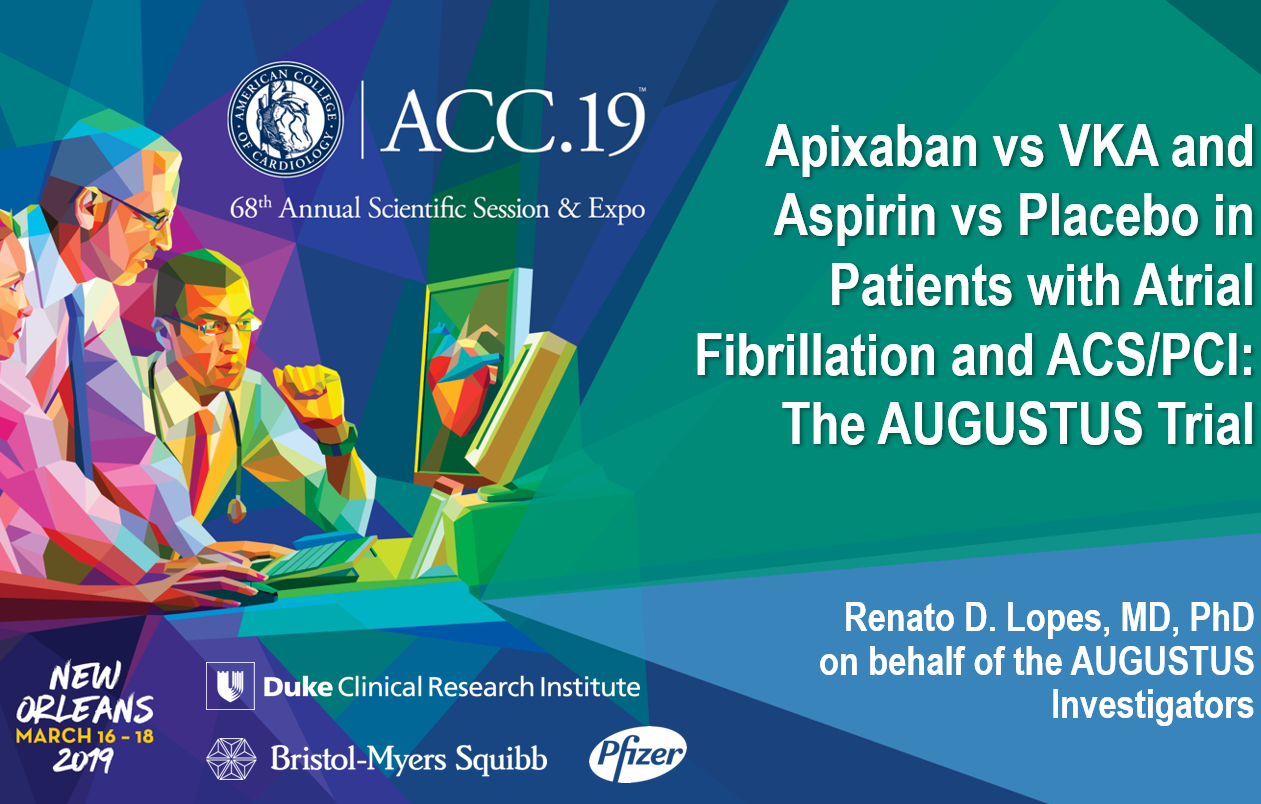 AUGUSTUS, a 2x2 factorial trial that randomized patients to apixaban versus a VKA and to aspirin versus placebo all on the background of P2Y12 inhibition, is unique among the DOAC trials in this area in that it included patients with ACS who were treated medically rather than with PCI. The main results showed that apixaban plus a P2Y12 inhibitor (mostly clopidogrel) reduced risks of bleeding and hospitalization, with no impact on ischemic events, compared with regimens containing a VKA, aspirin, or both.

In this new analysis of the trial, published simultaneously online in Circulation, with lead author Renato Lopes, MD, PhD (Duke Clinical Research Institute, Durham, NC), the investigators explored whether those results were consistent regardless of why patients were included.

Of the 4,614 patients enrolled in the trial, 38.8% were undergoing elective PCI for stable coronary disease, 37.3% were undergoing PCI for ACS, and 23.9% were receiving medical therapy alone for ACS.

Six-Month Outcomes With Apixaban Versus VKA

As in the overall trial, apixaban did not have a significant advantage over VKA in terms of death/ischemic events (MI, stroke, stent thrombosis, or urgent revascularization) in any subgroup (P = 0.356 for interaction).

Across groups, aspirin carried a higher rate of ISTH major or clinically relevant nonmajor bleeding (HRs ranging from 1.49 to 2.02) without having any positive impact on death/hospitalization (P = 0.787 for interaction) or death/ischemic events (P = 0.710 for interaction).

In each of the three subgroups, the rate of ISTH major or clinically relevant nonmajor bleeding was lowest in patients receiving apixaban plus placebo and highest in those receiving a VKA plus aspirin. Death/hospitalization tended to follow the same pattern.

When to Stop Aspirin

The authors note in their paper that there were numerically lower rates of stent thrombosis and MI with aspirin versus placebo in the two PCI subgroups, but that those were “offset by the higher risk of bleeding without net difference in terms of all-cause death.”

Nevertheless, the difference in stent thrombosis in particular sparked a discussion during the press conference as to when aspirin should be stopped after PCI, moving from triple to double antithrombotic therapy in patients who also require chronic anticoagulation.

Windecker said AUGUSTUS showed that extended aspirin therapy out to 6 months is harmful but acknowledged that the optimal duration of short-term aspirin use remains unknown.

Referring to the DOAC trials in the setting of A-fib and PCI, Robert Harrington, MD (Stanford University, CA), a member of the data and safety monitoring board (DSMB) for AUGUSTUS, said “what’s been disappointing is that none of the trials have been big enough to really uncouple the bleeding versus ischemic issue.” He noted that the question about bleeding was answered early on in AUGUSTUS, leading to a debate among the members of the DSMB about whether to let the trial continue. There was concern about the trade-off between bleeding and ischemic risks, Harrington said, pointing out that there were 21 cases of stent thrombosis in the placebo group and 11 in the aspirin group.

“I think you’re spot on, which is we don’t the know answer for how long do you need the triple therapy versus when you can switch to the double therapy,” Harrington said.

That sets up the next major research questions, Windecker said: “We know triple therapy is not the way to go, but we need to fine-tune and probably individualize which patients may benefit from a certain duration of aspirin.”

Windecker said more information will be coming from an AUGUSTUS substudy focused on stent thrombosis, which will be presented in November at the American Heart Association Scientific Sessions in Philadelphia, PA.

AUGUSTUS ACS: A 2x2 Factorial Randomized Trial of Apixaban vs. Warfarin and Aspirin vs. Placebo in Patients With Atrial Fibrillation and an Acute Coronary Syndrome

AUGUSTUS: Apixaban Plus P2Y12 Inhibitor the Best Combo in A-fib Patients With ACS or Undergoing PCI

Apixaban vs VKA and Aspirin vs Placebo in Patients with Atrial Fibrillation and ACS/PCI: The AUGUSTUS Trial