Public health policies, not unlike those in the US, are needed to combat the rising tide of cardiometabolic disease among India’s 1.3 billion people. 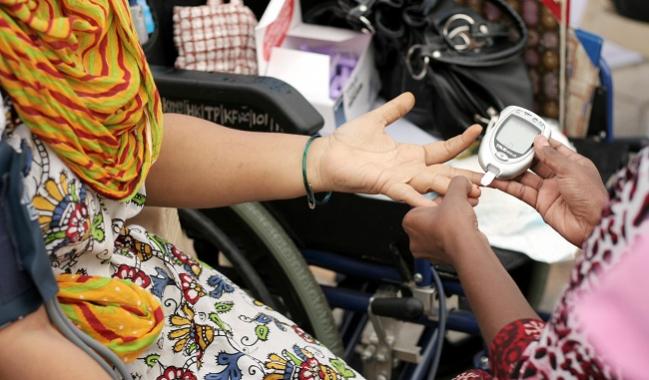 Diabetes and hypertension are highly prevalent in India and appear to affect all regions of the country, including both rural and urban areas, as well as richer and poorer populations, according to a new analysis.

“If these estimates pan out, and we believe these are the strongest estimates we’re going to get, that means the prevalence of hypertension in young adults in India is among the highest in the world,” senior investigator Lindsay Jaacks, PhD (Harvard T.H. Chan School of Public Health, Boston, MA) told TCTMD. “It’s a huge, huge problem, and it’s probably related to tobacco use, a high-salt diet, pollution, and other insults. It’s a little bit startling to see such high numbers in young populations, because it doesn’t bode well for the future in terms of cardiovascular events and mortality.”

It’s a little bit startling to see such high numbers in young populations, because it doesn’t bode well for the future in terms of cardiovascular events and mortality. Lindsay Jaacks

Public health programs for tackling high blood pressure are typically aimed at adults aged 40 years and older, but this analysis suggests hypertension screening needs to start much sooner. “Our results suggest screening should start maybe 20 years before that,” said Jaacks.

In an editorial, Alka Kanaya, MD (University of California, San Francisco), says the report is a “call to action,” as well as a stark warning of the looming crisis of cardiovascular disease in India. Kanaya advocates applying approaches for chronic disease prevention learned in high-income countries, such as policy interventions for tobacco control and partnerships for healthy diet and physical activity promotion. “Effective implementation is needed to make even a dent in the high burden of hypertension and diabetes,” she writes.

Data from the US and UK have shown that South Asian immigrants have a predisposition toward cardiometabolic disease, including hypertension and type 2 diabetes, when compared with other racial/ethnic groups. Jaacks noted that other studies have suggested South Asians might be vulnerable to pancreatic β-cell dysfunction and increased visceral adiposity.

The purpose of present study, she said, was to gather evidence by geographical and socioeconomic characteristics, which are important given the size of the country and the fact that healthcare is run at the state level. For their study published January 29, 2018, in JAMA: Internal Medicine, researchers pooled data from two large household surveys in India, both of which were conducted between 2012 and 2014. The surveys were carried out in all but two of the 29 Indian states and included 1,320,555 adults aged 18 years and older.

To TCTMD, Venkatesh Murthy, MD (University of Michigan, Ann Arbor), who was not involved in the study, noted that India has moved from a largely agrarian society toward one that is increasingly urbanized, a trend that is happening in developing economies worldwide. “With that change, there has been an explosion in diabetes, metabolic syndrome, and hypertension,” he said.

Murthy said South and East-Asian individuals tend to be more predisposed toward developing diabetes, even with milder degrees of obesity than for other races/ethnicities. Hypertension is also a growing problem in these populations. Combined, this had led to discussions that South Asians may be particularly vulnerable to early-onset or a particularly aggressive form of cardiovascular disease, he said. These patients would have diffuse narrowing of the coronary arteries or may be more likely to first present with STEMI.

For that reason, Murthy discusses early screening and the importance of adhering to a heart-healthy lifestyle in Indian or South Asian patients. “I think it’s reasonable in these higher-risk patients, when they have questions and concerns, to screen more frequently,” he said.

Overall, the prevalence of diabetes varied by more than a factor of six across the Indian states and hypertension by a factor of two. The difference in disease prevalence tended to vary little by educational attainment, but was higher in urban than rural areas. When the prevalence of the conditions was stratified by socioeconomic characteristics, household wealth was associated with both diabetes and hypertension, albeit “modestly,” say researchers.

“We didn’t see the [socioeconomic status] gradient we thought we would see,” said Jaacks, noting that this was true of both rural and urban areas.

She told TCTMD that countries in the early stages of transitioning toward urbanization tend to have a higher prevalence of cardiovascular risk factors, such as obesity, hypertension, diabetes, in wealthier, more educated communities. Eventually, however, that trend tends to “flip,” such that cardiometabolic risk factors are more prevalent among individuals with lower socioeconomic status, not unlike what is observed in the US.

“Looking ahead, I think we’re going to see health disparities where low-income populations are at increased risk not only for the usual communicable diseases, but also for noncommunicable diseases like diabetes and hypertension,” said Jaacks. “It really will start to ring some alarms for disparities in health as the burden starts to shift to lower [socioeconomic status] individuals.”

To TCTMD, Jaacks said public health policies are needed to address the burden of cardiometabolic risk factors, such as air pollution, tobacco use, physical inactivity, and diet. National policies and campaigns are already in place, she noted, and are starting to be heeded. She was optimistic, too, about technological innovations geared toward primary prevention and secondary care to reach India’s 1.3 billion people.

This includes the use of mobile technology and telemedicine “starting to pop up [in India], which I’m really excited about, as I think they have a lot of important implications for the healthcare system, such as getting high-quality care to people who need it,” said Jaacks. “These are often low-income people, or those in remote or rural settings where a lot of the burden is for these diseases.”

Murthy noted that infrastructure could also play an important role, particularly in countries undergoing a rapid shift toward urbanization. “There’s an opportunity to design people’s lifestyles as we think about laying out these cities,” he said.

Experts Debate: Is It ‘Nuts’ to Restart Anticoagulation After Lobar ICH?