Canakinumab Falls Short of Halting Progression to Diabetes in Patients at Risk: CANTOS

It cut CV events in patients with diabetes and kidney disease but didn’t stop new-onset diabetes, despite inflammation’s role in insulin resistance. 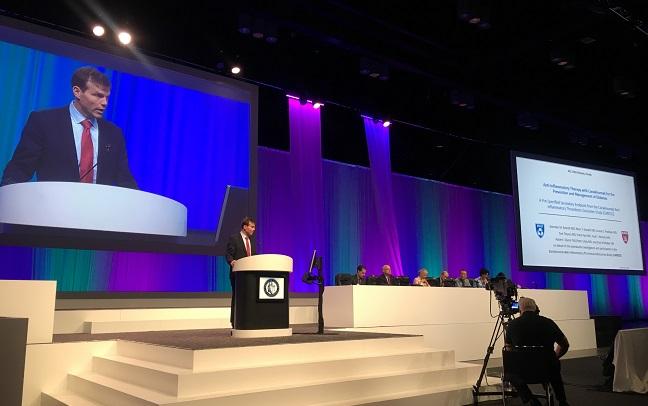 ORLANDO, FL—Canakinumab, a drug that targets the body’s inflammatory response, is equally effective in high-risk patients with atherosclerosis and diabetes, prediabetes, or normal glucose metabolism, according to new results from the CANTOS trial.

But in a prespecified analysis, treatment with canakinumab (Novartis) did not prevent the progression to diabetes in patients with impaired glucose metabolism—a hoped-for side benefit of the drug.

“There’s this idea that the pancreas kind of gives out at some point in type 2 diabetes, that it just goes kaput, and inflammation may play an important role in the islet cells giving out,” lead investigator Brendan Everett, MD (Brigham and Women’s Hospital, Boston, MA), told TCTMD. “We thought, maybe, by interrupting that [with canakinumab] we could prolong islet cell longevity, improve peripheral glucose sensitivity, and prevent diabetes.”

Everett said the failure to prevent the progression from prediabetes to diabetes was somewhat disappointing, but that the results should be tempered with the significant reductions in cardiovascular outcomes observed in the main trial and in this latest analysis.

Canakinumab is a fully human monoclonal antibody that targets interleukin-β, a cytokine involved in the inflammatory response and the interleukin-6 signaling pathway. Interleukin-β, activated by the NLRP3 inflammasome, is known to induce procoagulant activity, promote monocyte and leukocyte adhesion to vascular endothelial cells, and promote the growth of vascular smooth-muscle cells.

As previously reported from CANTOS, 150 mg of canakinumab every 3 months reduced the relative risk of nonfatal MI, nonfatal stroke, or cardiovascular death—the study’s primary composite endpoint—by 15% when compared with placebo. Subsequent analyses identified individuals who responded robustly to treatment, and these individuals had larger reductions in MACE, as well as in cardiovascular and all-cause mortality. For nonresponders, however, they gained much less from treatment, say investigators.

Presenting the results of the diabetes substudy at the American College of Cardiology (ACC) 2018 Scientific Session, Everett said there is evidence suggesting subclinical inflammation might play a role in insulin resistance and impaired insulin production. One study even suggested that treatment with an interleukin-1 receptor antagonist could improve beta cell function and peripheral glucose sensitivity, as well as reduce HbA1c, in patients with established type 2 diabetes.

In CANTOS, 4,057 patients had diabetes, 4,960 had prediabetes, and 1,044 had normal glucose metabolism. Prediabetes was defined as HbA1c ranging from 5.7% to less than 6.5% or fasting plasma glucose ranging from 100 to 125 mg/dL at the time screening/randomization.

Overall, treatment with canakinumab reduced the risk of the primary endpoint, as well as a secondary endpoint that included MACE plus unstable angina requiring urgent revascularization, in all patients regardless of glycemic status. Baseline concentrations of hsCRP and IL-6 both predicted new-onset diabetes among those without diabetes at study entry.

Although treatment with canakinumab reduced hsCRP and interleukin-6 in a dose-dependent manner, treatment with the monoclonal antibody failed to prevent the progression to diabetes amongst patients with prediabetes at study entry. Even amongst “biologic responders” to therapy, those with on-treatment hsCRP levels less than 2.0 mg/L, canakinumab did not reduce the progression from prediabetes to diabetes compared with placebo.

Paul Ridker, MD (Brigham and Women’s Hospital), who led the CANTOS trial, said that inhibition of the NLRP3 inflammasome with canakinumab is likely to affect many different organ systems. “When we designed the main trial, we knew we were going after atherosclerosis and we knew we were going after cancer,” said Ridker. The progression to new-onset diabetes was included as a prespecified secondary endpoint because the diabetes world is particularly concerned about disease progression in those with impaired glucose metabolism, noted Ridker.

Everett and Ridker both pointed out that canakinumab did reduce HbA1c levels amongst patients with prediabetes for the first 6 to 9 months of treatment, but the reduction attenuated over time.

“It’s a bit of a mystery why that occurred,” said Everett. The reduction in HbA1c and subsequent increase over time has been observed with other diabetic interventions, including in the Diabetic Prevention Program. “It makes me think there’s some sort of other broader biological process that is multifactorial and continues to gain a head of steam as time goes on. We’ve been able to delay the process briefly, at least with respect to HbA1c levels, but ultimately it’s not enough to prevent the further progression and development of disease.”

Kim Eagle, MD (University of Michigan, Ann Arbor), who moderated the late-breaking clinical trial session, asked about the risk of infection, particularly life-threatening sepsis in diabetic patients, a group that frequently encounters challenges with respect to wound healing. Everett said the canakinumab-treated patients did have an increased risk of infection in the overall trial, and in this analysis of diabetic patients, canakinumab was associated with an increased risk of fatal infection compared with placebo (HR 1.86; 95% CI 1.01-3.43).

For those with moderate CKD, treatment with canakinumab reduced the relative risk of MACE by 18% compared with placebo (P = 0.05). When investigators focused on the biologic responders, the MACE rate was reduced by 31% with canakinumab treatment.

“What’s particularly interesting about the CKD piece is that there’s nothing to offer these people,” said Ridker. “The few things we have are hemodynamic drugs, which are difficult for other reasons, but there’s no hemodynamic effects here at all. This is purely an inflammatory issue. I’m trying to push the sponsor to do a trial in patients with hemodialysis. If you think about it, it’s the one group of patients where statins don’t work—LDL cholesterol is not a risk factor—and inflammation is an overwhelmingly powerful driver of bad outcomes. They’re unbelievably high risk, and there’s no therapies for them.”

COMPASS Approach Helps With Leg Complications in Patients With PAD

Apixaban Has Edge Over Other NOACs in Large, Real-World Analysis

CANTOS: Anti-Inflammatory Therapy with Canakinumab for the Prevention and Management of Diabetes