Investigators reported higher mortality among shock patients treated with multivessel interventions, as well as some new insights by lesion location. 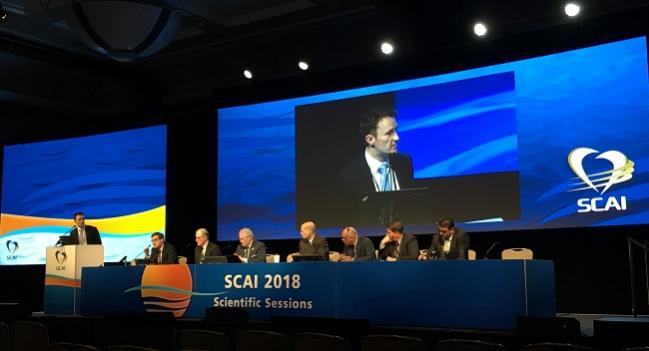 SAN DIEGO, CA—(UPDATED) A retrospective review of all acute MI patients enrolled in the British Columbia Cardiac Registry (BCCR) shows that among those who presented in cardiogenic shock, patients who received culprit-vessel interventions instead of multivessel PCI were more likely to survive to 30 days and 1 year.

The findings bolster those from the CULPRIT-SHOCK trial, presented at the TCT 2017 meeting, which demonstrated better survival for a culprit-vessel-only approach in this high-risk subgroup. CULPRIT-SHOCK flew in the face of other recent studies, conducted predominantly in hemodynamically stable patients, which have shown that multivessel revascularization at the time of the index procedure saves lives. Those studies had led to a shift in guidelines, which now support treatment of nonculprit lesions in acute MI patients.

The aim of the current study was to determine whether real-world registry results would uphold the key findings from CULPRIT-SHOCK. McNeice and colleagues, including senior author Bilal Iqbal, MD (Victoria Heart Institute), looked at the 649 patients with acute MI, cardiogenic shock, and multivessel disease enrolled in the BCCR registry between 2008 and 2014. They found that compared with patients who underwent multivessel revascularization during their emergency procedure, those who received culprit vessel-only interventions had lower mortality at 30 days (23.7% vs 34.5%) and 1 year (32.6% vs 44.3%).

Speaking with TCTMD, McNeice pointed to the fact that multivessel disease is very common among acute MI patients presenting with cardiogenic shock—representing nearly three out of four patients in their series. “There’s still some debate about the best way to manage these patients,” he said. Earlier this year, for example, a large Korean registry study concluded that multivessel revascularization remained the best option in this high-risk group.

According to McNeice, the Kaplan-Meier curves for mortality in their registry analysis closer mirror those in CULPRIT-SHOCK, diverging within the first 5 days after the intervention. In further analyses that took into account the location of the nonculprit lesions, they discovered a signal that they believe may be unique to their analysis, namely that the only nonculprit vessel associated with an increased risk of 1-year mortality was the LAD and, in particular, nonculprit proximal LAD disease (HR 1.82; 95% CI 1.20-2.76; P = 0.005).

In patients who had nonculprit disease outside of the proximal LAD—in the left circumflex or right coronary artery, for example—nonculprit PCI was not associated with mortality.

This observation is at odds with conventional wisdom, McNeice acknowledged. “Theoretically . . . the larger the myocardial territory, the more improvement the patient may have in terms of improving left ventricular function and reducing infarct size,” he explained. “But what we found was the opposite, that the larger the subtended myocardial territory, the more risk there was [with a multivessel approach].”

The current American guidelines in the setting of cardiogenic shock recommend nonculprit PCI if the patient remains shocked after treating the culprit vessel, McNeice explained, whereas European guidelines give a class 2b recommendation for immediate multivessel revascularization in the setting of shock. Subsequent guideline updates may need to specifically address the issue of how much myocardium is supplied by a diseased nonculprit artery, he hinted, potentially arguing for a “reversal of thinking” as to the best way forward, based on the amount of myocardial territory supplied by the nonculprit lesion.

During his presentation today, McNeice showed additional subgroup data showing that patients under age 80, those without diabetes, and those presenting with STEMI were more likely to benefit from a culprit-vessel strategy than from a multivessel approach. “However, multivessel interventions may be considered in selected patients and in the setting of nonculprit LCX and RCA disease,” he said.

Speaking with TCTMD at a morning press conference, McNeice acknowledged that the Korean registry data were not in line with CULPRIT-SHOCK, but pointed out that there were important differences between the studies. Whereas CULPRIT-SHOCK and the BCCR registry both included all acute MI patients, of whom 30% and 40%, respectively, had non-STEMI, the Korean registry included STEMIs only. “The non-STEMIs tend to be late presenters, over the age of 80, females with more clinical comorbidity,” McNeice observed. The number of patients with three-vessel disease was also somewhat lower in the Korean registry than in the other two cohorts.

Picking up on this point during the discussion that followed McNeice’s presentation, George Dangas, MD, PhD (Mount Sinai Hospital, New York, NY), asked whether one takeaway message from the recent trial and registries might be that a “judicious approach” is best, particularly given the excellent outcomes achieved by the Korean investigators who waited for patients to be stable before tackling additional lesions.

McNeice agreed, adding that there is more to learn about the pathophysiology of patients presenting in cardiogenic shock and acute MI that goes beyond pump failure and likely entails a systemic inflammatory response. “Understanding the pathophysiology [will be] the first step in winning the battle,” he said.

Holger Thiele reviews the CULPRIT-SHOCK trial and its findings with C. Michael Gibson.