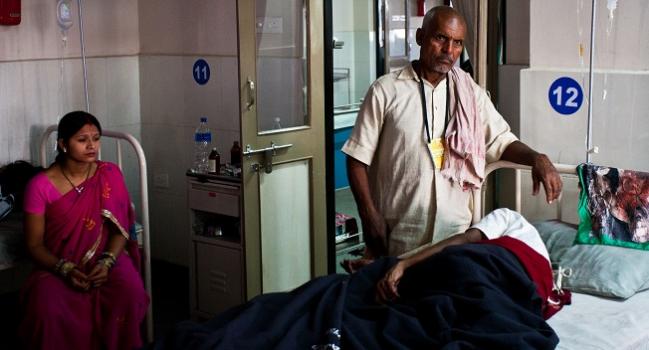 DUBAI, United Arab Emirates—People around the world who have noncommunicable diseases (NCDs), including cardiovascular disease, continue to struggle to pay for their care, particularly if they live in a less affluent country, an analysis of the PURE study shows.

Patients with an NCD were significantly more likely than those without an NCD to experience catastrophic spending on healthcare, defined as doling out more than 40% of their effective income, Adrianna Murphy, PhD (London School of Hygiene & Tropical Medicine, England), reported at the 2018 World Congress of Cardiology & Cardiovascular Health here.

That finding was seen across country income levels, although the difference widened as income level declined. The disparity between patients with and without an NCD was not statistically significant in low-income countries, but that shouldn’t be seen as a positive sign, Murphy indicated.

“What we think is happening is that, in fact, in low-income countries, households are forgoing care and therefore not incurring expenditure, so the burden on their household ends up disguised,” Murphy said.

The most obvious implication of the findings, she told TCTMD, “is to advocate for financial risk protection, which is universal health coverage and coverage specifically of medicines, which tend to be what is driving these costs.”

At two high-level meetings in 2011 and 2014, the United Nations established commitments to reduce the risk of dying prematurely from NCDs. This past September, there was a third high-level meeting meant to review the progress that has been made and to renew those commitments. Part of the strategy to reduce NCD-related premature mortality involves pushing for universal healthcare coverage because, Murphy noted, evidence available prior to 2014 highlighted the substantial economic burden that out-of-pocket payments for cardiovascular disease treatment was placing on families.

‘This Is Really an Alarming Result’

To explore the ongoing financial risk of people with NCDs despite commitments coming out of the high-level meetings, Murphy and colleagues examined data from the PURE study on 18 countries with different levels of economic development. The investigators looked both at catastrophic spending (health expenditures greater than 40% of income remaining after basic needs are met) and impoverishment (when total expenditure of a household minus any healthcare spending is below the basic needs line).

Participants in the study were divided into three groups:

The percent of household effective income spent on healthcare was significantly higher in people with an NCD across country income levels, except for low-income, and in China, which was analyzed separately because of its disproportionately large sample size. Findings were similar when looking at the proportion of households with catastrophic spending or impoverishment, although the differences in impoverishment were less dramatic because it is a more conservative indicator, Murphy said.

The higher risk of catastrophic spending in people with an NCD remained after adjustment for potential demographic confounders, such as age, sex, household size, highest education level, proportion of the household employed, community, and country.

And women might be particularly hard hit by this phenomenon. In low-income countries, 42.7% of women with an NCD reported not accessing medication due to cost, Murphy said, stressing, “This is really an alarming result that I think requires more investigation.”

In the meantime, the medical community needs to be pushing for broad coverage that includes medications, Murphy said.

“Universal coverage for healthcare treatment is one thing, but considering medicines is also very important,” she said. An “additional point is to then consider whether these drugs are in fact available when they’re supposed to be, whether they’re available close to a family’s home, because often the cost of traveling to a pharmacy or taking a day off and waiting in a public clinic, like often happens in South Africa, for example, that can also have a cost, a direct financial cost or an indirect cost on lost days wages.”

Murphy pointed out that there are precedents for poorer countries covering medicines—antiretrovirals, for instance—“so it’s not a far-fetched ambition.”