There was also a suggestion of improved RV function with TriClip, which investigators attribute to the reduction in TR. 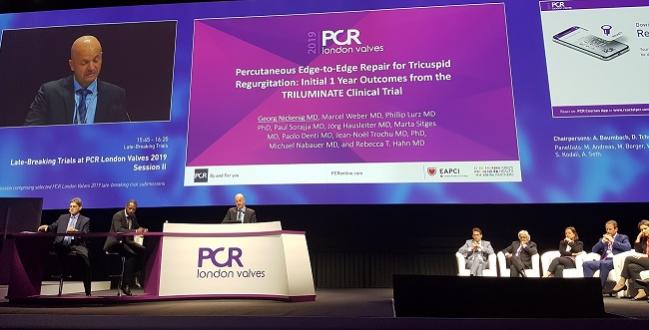 LONDON, England—Patients with symptomatic tricuspid regurgitation (TR) treated with an investigational clip-based percutaneous edge-to-edge repair device (TriClip; Abbott) had a sustained reduction in TR severity at 1-year follow-up, as well as a sustained improvement in symptoms and quality of life, according to results from the TRILUMINATE feasibility study.

At 1 year, 64% of patients had moderate-or-less TR, which was up from 4% at baseline and 54% at 30 days, reported lead investigator Georg Nickenig, MD (University Hospital Bonn, Germany), during a late-breaking clinical trials session at PCR London Valves 2019.

“Tricuspid regurgitation is a very frequent valve disease with poor prognosis and a heavy load of morbidity,” he said. “Most patients are hospitalized several times per year and treatment is currently limited mainly to the use of diuretics. The role of surgery is limited unless you have a concomitant reason for open-heart surgery, such as CABG or mitral valve surgery. Therefore, a minimal catheter-based procedure offers some promise to treat and tackle these patients.”

TRILUMINATE was a prospective, single-arm study testing TriClip, which is a modification of the MitraClip NTR device used for mitral valve repair, in 85 symptomatic patients with moderate-or-greater TR. The primary endpoint of the trial, which was presented at EuroPCR in May, was TR reduction of at least one grade 30 days after the procedure. At 1 year, echocardiographic follow-up was available for 35 patients.

Like the 30-day results, 87% of patients had at least a one-grade reduction in TR, which suggests that edge-to-edge repair is a durable treatment in this patient population, said Nickenig. Using a 5-point scale for grading TR, he noted that many patients were not only suffering from severe (28%) and massive (30%) TR at baseline, but also 38% had torrential regurgitation (defined as an effective regurgitant orifice area [EROA] > 80 mm2; vena contracta > 21 mm; or 3D vena contracta area or quantitative EROA > 110 mm2). At 1 year, 5% had no TR, while 31% and 28% had mild and moderate TR, respectively.

“Still, there were patients with severe TR we were not able to treat with this small NTR-like device in this early feasibility study,” he said.

Clinically, an improvement in heart symptoms was also maintained at 1 year, with 80% of patients in NYHA class I/II heart failure, which was up from 22% at baseline, but down slightly from 84% at 30 days. Improvements in quality of life (QoL) as assessed by the Kansas City Cardiomyopathy Questionnaire were maintained from 30 days to 1 year. From baseline, there was a significant improvement in the 6-minute walk distance, from 295.6 m to 331.1 m at 1 year.

Nickenig also presented data suggesting positive reverse remodeling with the improvement in TR. At 1 year, there was a significant reduction in RV end-diastolic dimension, as well as a trend toward a reduction in RV volume. Additionally, there was a significant improvement in right ventricular function. Between 30 days and 1 year, there were three cardiovascular deaths and two deaths from noncardiovascular causes. There were no device-related safety events beyond 30 days, but three patients had a single-leaflet detachment, which Nickenig believes may be attributable to insufficient imaging at the time of leaflet grasping with TriClip.

Effect on TR Grade vs Effect on Symptoms, QoL

Ashok Seth, MD (Fortis Escorts Heart Institute, New Delhi, India), a panelist during the late-breaking session, noted that while the majority of patients only had a one-grade decrease in TR, the improvements in symptoms and quality of life were quite dramatic with TriClip. “Is there something that we’re missing?” he asked, wondering if greater contact with physicians in the study helped to augment the effect of the intervention.

Nickenig said they have no answers just yet, but this is an issue the TRILUMINATE investigators are trying to unravel. He added that even for patients with massive or torrential TR at baseline who had bigger decreases in TR grade, the clinical impact was not that different from patients who only had a one-grade improvement in TR.

“It could be because it is an uncontrolled study, that we are also talking a bit about a placebo effect,” said Nickenig, noting that the next step will be a randomized, controlled trial. In fact, Abbott has already started the TRILUMINATE investigational device exemption (IDE) trial with a planned enrollment of approximately 700 patients. In that prospective, multicenter study, patients with severe-or-greater TR will be randomized to treatment with either medical therapy (but no sham procedure) or TriClip and followed for 5 years. The primary endpoint is all-cause mortality or hospitalization for tricuspid valve surgery or heart failure hospitalizations at 1 year.

Moderating the session, Didier Tchétché, MD (Clinique Pasteur, Toulouse, France), said physicians are learning more each day about interventional options for patients with symptomatic TR. “We see that we can have very good clinical outcomes, and even if we don’t dramatically decrease the amount of regurgitation, the patients are going to improve,” he said. Nonetheless, it’s still uncertain which patients with TR are ideal candidates for a transcatheter mitral valve procedure.

Nickenig said that with respect to a grasping leaflet device, such as TriClip, the amount of coaptation shouldn’t be too large, noting they excluded patients with a gap distance of more than 6 mm. Secondly, transcatheter repair with TriClip wouldn’t make sense if the “patient is too far gone,” such in those with significantly impaired RV function, or those with severe pulmonary hypertension. In such patients, life expectancy at 1 year would be less than in patients with these other comorbidities, he said.

“Of course, there also shouldn’t be any structural issues with the tricuspid valve,” said Nickenig. “We’re talking about functional tricuspid regurgitation, although this is probably 90% of the population.”

Many ASCVD Patients Skimp on CV Meds Due to Costs: US Survey