The follow-up data set the stage for a larger study to determine if tackling residual ischemia after a good PCI reduces outcomes. 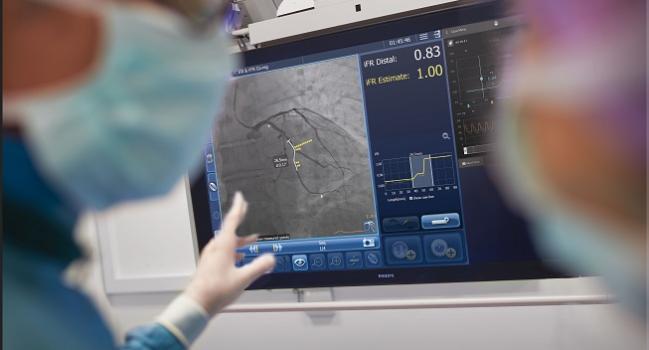 Highly symptomatic patients who undergo PCI and show no signs of residual ischemia after the procedure—as assessed by physiological testing with instantaneous wave-free ratio (iFR)—have larger improvements in anginal symptoms at 1 year when compared to patients with residual ischemia, according to follow-up data from the DEFINE-PCI trial.

Additionally, those patients who had their procedure “optimized” with iFR—as defined by a postprocedure iFR ≥ 0.95—had a lower rate of cardiac death, spontaneous MI, or clinically driven target vessel revascularization when compared with patients with a post-PCI iFR of less than 0.95, lead investigator Manesh Patel, MD (Duke University Medical Center, Durham, NC), reported during a late-breaking clinical trial session at TCT Connect 2020.

Allen Jeremias, MD (St. Francis Hospital, Roslyn, NJ), one of DEFINE-PCI’s principal investigators, said these new data highlight the importance of physiologic testing after PCI, not just before it. “I think that’s the message for the community coming out of this trial—let’s check our work,” said Jeremias. “We can see from the 1-year data it obviously matters. If we can get to a good iFR, which we now know is 0.95 or greater, these patients have very good outcomes. If we don’t achieve that, of course, these patients might come back with recurrent symptoms.”

In DEFINE-PCI, initially presented last year at the American College of Cardiology Scientific Sessions, investigators reported that of 467 patients who had successful PCI and available postprocedure iFR data, nearly one-quarter had hemodynamically significant lesions according to iFR testing. In a post hoc analysis, investigators identified a post-PCI iFR value of ≥ 0.95 as having the potential to predict clinical events.

I think that’s the message for the community coming out of this trial—let’s check our work. Allen Jeremias

“We know that recurrent angina at 1 year is present in 20% to 30% of patients from multiple studies,” said Patel, citing the COURAGE, SYNTAX, FREEDOM, and FAME studies, among others. The DEFINE-PCI trial with iFR and iFR pullback, which provides a pressure map of the entire coronary vessel, was specifically designed to understand residual ischemia in patients with stable and unstable angina following PCI, he said.

In their 1-year follow-up, the researchers assessed the change in the Seattle Angina Questionnaire (SAQ) angina frequency as well as clinical events. In all patients and in various subgroups (eg, patients with no, daily/weekly or monthly angina), “there was a general trend towards improved angina across many, if not all, of these subgroups, with a higher iFR,” said Patel. For patients with the most angina at baseline, those with an iFR ≥ 0.95 had the largest absolute change in the SAQ quality-of-life score.

“Death was generally similar between both groups,” said Patel. “There’s not a tremendous number of events in these 500 patients, but again, MI was significantly different, specifically spontaneous MI.” Clinically driven revascularization was statistically similar between those with an iFR < 0.95 and those with higher values, he added, although TVR and TLR were numerically higher in patients with residual ischemia.

In terms of implications, Patel said FFR and iFR are well studied, and there are established indices—FFR ≤ 0.80 and iFR ≤ 0.89—that indicate when operators should revascularize a given lesion. “The DEFINE-PCI trial, leading to the DEFINE-GPS study, hopefully aims to determine how to optimally revascularize patients, testing a post-PCI iFR target to determine when we can get the best PCI outcomes,” he said.

Dipti Itchhaporia, MD (Hoag Memorial Hospital Presbyterian, Newport Beach, CA), who wasn’t involved in DEFINE-PCI, said physiologic testing with iFR or FFR is typically used to make a decision about revascularization. “We don’t usually check it after PCI,” she told TCTMD. “Usually we get a great result. You open up the artery, you get TIMI grade 3 flow, and you look at it [on the angiogram]. There might be people doing iFR or FFR after the procedure, but it’s not routine. This [study] takes it one step further.”

Data has shown that the angiographic “eyeball method” is not 100% effective for identifying lesions in need of revascularization, she added, and if DEFINE-GPS is positive, it would tell physicians that the “eyeball method isn’t so great after procedure either.”

For Jeremias, the post-PCI iFR is akin to a good mechanic taking the car around the block for a spin after he’s done his work.

“When interventional cardiologists believe, based on the angiogram, they did a great job placing the stent, in one-quarter of patients there was still residual ischemia,” he said. “Putting that into context, it means that if you take your car to the mechanic and they fix the engine, they look at it and say, ‘It looks pretty good, I think we’re done,’ but nobody actually takes it for a test drive—that’s the equivalent here.”

Yesterday at TCT Connect, TARGET FFR, a small randomized study that also delved into post-PCI physiological testing, showed the strategy could reduce the proportion of patients with residual FFR ≤ 0.80.

Following the presentation, Anthony Gershlick, MBBS (University of Leicester, England), said the devil is in the details of a small study such as DEFINE-PCI. The difference in the rate of clinical events was driven by eight spontaneous MIs. “And sometimes, of course, when you’re trying to get to more than 0.95 [on iFR], there are downsides,” he said. “The headlines here are really good, but we really need to know a lot more before we’re encouraging people to go for broke with some of these stented vessels.”

To TCTMD, Itchhaporia said what operators would need to do if they failed to achieve a good physiologic result would depend on a number of factors.

“You’d have to understand the reason behind it,” she said. “You might [use] IVUS to see if you have full stent apposition, see if you covered the whole area, or see if the stent is long enough. You might think something is 5 mm, but the actual atheroma might extend beyond that. The question is whether you achieved adequate coverage. Was the sizing appropriate? Was it well expanded? I think you’d have to look at all those things.”

Patel stressed they are not advocating operators change practice to strive for physiologic values that are perfect at this present time; prolonging any intervention has its risks. The next step will be to understand the clinical effectiveness of iFR guidance, noting that the majority of lesions identified in the trial were focal, or next to the stent edge, and these could potentially be treated. In DEFINE-GPS, approximately 3,000 patients are expected to be enrolled and investigators will test whether iFR-optimized PCI reduces the risk of target vessel failure or rehospitalization for unstable angina.

Dee Dee Wang, MD (Henry Ford Health System, Detroit, MI), told the media in a briefing that DEFINE-PCI highlights the limitations of 2-D imaging. If physiologically optimized PCI is validated in larger trials, she said, the technology has the potential to be “very disruptive.”

FFR Insights Before and After PCI: Fresh Food for Thought

3 days ago
Dr. Thomas E. Levy has been a practicing cardiologist for 30 years. In his book, Stop America’s #1 Killer!, Dr. Levy references over 650 studies published in medical and scientific journals that prove conclusively that coronary heart disease is caused by multiple nutritional deficiencies. On page 253 he lists 33 dietary supplements, available at any health food store, “…for optimizing the ability of the artery to regenerate itself and reverse any existing atherosclerosis…the typical diet does not even come close to supplying enough of these essential vitamins, minerals and nutrients.” As someone with a family history of heart disease, I have been taking this list of supplements since 2018. I am now 66 years old and recently had an MRI/PET scan. The doctor declared, “Ray, your arteries are as clean as a whistle!” Needless to say, I am a big fan of Dr. Levy and am dedicated to disseminating this important information; so, I give away free paperback copies of his book (this book is not available as an e-book). If you want a free copy of Stop America’s #1 Killer, just email me at rayellis@reagan.com, leave your name and physical address and I will snail-mail it to you right away. Be Well!