While two analyses suggest the thrombotic risk can be mitigated, others say the data are “frustrating” in that there’s still not even a hint of benefit. 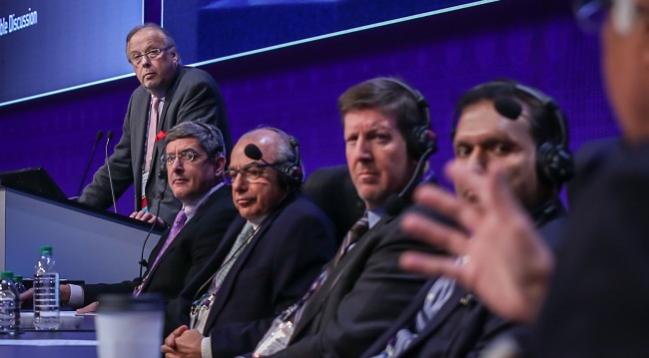 The results, which were presented today at TCT 2017, are unlikely to surprise physicians familiar with the device, nor are they likely to have much clinical impact given Abbott’s recent decision to stop selling Absorb BVS due to low commercial sales.

Several meta-analyses published to date, as well as 3-year data from the ABSORB II trial, have also shown the Absorb device is associated with an increased risk of adverse events, particularly an increased risk of scaffold thrombosis, when compared with the metallic everolimus-eluting stent (Xience, Abbott Vascular).

Stephen Ellis, MD (Cleveland Clinic, OH), who presented the 3-year ABSORB III results during a morning press conference, reported that use of Absorb was associated with a strong trend toward an increased risk of target lesion failure, a composite endpoint that included cardiac death, target-vessel MI, and ischemia-driven target lesion revascularization (HR 1.31; 95% 0.99-1.73).

Speaking with the media, Ellis said that even if the device were available, it wouldn’t be frequently used. An eligible candidate might be a patient with diffuse disease in the left anterior descending (LAD) artery, he suggested. “You don’t want to put a metallic stent in there,” said Ellis. “If you put a biodegradable scaffold in and allow the vessel to remodel, you won’t block the patient from getting an opportunity for bypass surgery, but that’s a very small niche.”

To TCTMD, Wayne Batchelor, MD (Southern Medical Group, PA, Tallahassee, FL), who was not involved in the ABSORB studies, said the challenge with an innovative product such as Absorb BVS is in deciding when the product is ready for clinical testing.

“This might have been an error in coming out with a bioresorbable vascular scaffold that was not ready for prime time,” said Batchelor.

This might have been an error in coming out with a bioresorbable vascular scaffold that was not ready for prime time. Wayne Batchelor

Even though the product is no longer commercially available, the ABSORB data provide researchers and physicians an opportunity to discern the reasons for the higher thrombotic event rates with Absorb BVS. “I’m not sure we should throw out the whole concept,” said Batchelor. “On the flip side, industry is going to have to show us that their future designs are good enough to even be tested.”

Recently, Boston Scientific scrapped development of their bioresorbable vascular scaffold, deciding the investment needed to overcome the technical challenges is not worth the cost. Given the Absorb setbacks, the company felt they would be better off concentrating their resources on their existing metallic drug-eluting stents.

During a First Report Investigation session at TCT, Bernard Chevalier, MD (Institut Cardiovasculaire Paris Sud, Massy, France), presented the 4-year ABSORB II data, showing that the composite endpoint of cardiac death, target-vessel MI, and clinically indicated target-lesion revascularization occurred in 11.1% of Absorb-treated patients and 5.6% of Xience-treated patients (P = 0.05). At 4 years, definite/probable scaffold thrombosis occurred in 2.8% of Absorb patients and there were no events in the Xience arm.

In a landmark analysis, there were no scaffold thrombosis events between 3 and 4 years. Similarly, the risk of death or MI did not significantly differ between the Absorb- and Xience-treated patients, but there were trends toward more coronary revascularization with BVS.

Allen Jeremias, MD (St. Francis Hospital, Roslyn, NY), who participated in the morning press conference, said he was “frustrated” with the ABSORB clinical data to date.

“You would think at some point there would be some benefit,” he said. “Maybe 3 years, 4 years, you would think OK, we get the patient through the first couple of years and then there is a prolonged benefit, there is a differentiation between the metallic stent and Absorb scaffold. But I don’t think there’s any good data at this point that indicates [that this may be the case].”

While optimal implantation techniques can mitigate some of the early risk with Absorb, Jeremias said the long-term data have thus far disappointed. “We need to have that signal to really see there is a benefit and this is a technology we should pursue,” he said. At this stage, he added, there is not enough evidence showing a clear path forward.

The US Food and Administration (FDA), which had previously warned physicians about the risk of major adverse cardiovascular events with Absorb BVS when the device was commercially available, issued an update today based on the 3-year results from ABSORB III. The FDA said today that while physicians with available inventory might continue to implant Absorb BVS at their discretion, “they should carefully consider its safety and effectiveness and only use it if they believe it is in the best interest of their patients.”

In the ABSORB III trial, which is published simultaneously in the Journal of the American College of Cardiology, the 3-year risk of target-vessel MI was significantly increased among patients treated with Absorb (8.6% vs 5.9% in the Xience-treated patients; P = 0.03) as was the risk of target-vessel MI related to device thrombosis (1.9% vs 0.6% in the Xience arm; P = 0.02).

The risk of device thrombosis was also significantly higher in the Absorb-treated patients (2.3% vs 0.7% in the Xience arm; P = 0.01)

The researchers reported that “device-related events beyond 1 year continued to accrue after treatment with both BVS and the [everolimus-eluting stent], although to a slightly greater extent with BVS.”

Speaking with the media, Ellis said early scaffold thrombotic events are likely attributable to Absorb’s thick struts. Regarding late events, he said OCT imaging suggests a “dismantling” of the device over time. “If the scaffold is not well embedded in the vessel wall so that healing can embrace the device, when the device begins to lose its structural integrity, it can flop into the lumen, if you will, dragging tissue with it,” said Ellis. “This is inherently thrombogenic.”

Ellis added: “Clearly, there is something between year 1 and year 3.”

Importantly, scaffold thrombosis events occurring in the first year clustered in very small vessels, those with a reference vessel diameter less than 2.25 mm, but scaffold thrombosis events occurring between 1 and 3 years were also observed in vessels more appropriately sized for Absorb. Patients with thrombotic events in both treatment periods were taking dual antiplatelet therapy at the time of the events.

As for patients who currently have an Absorb scaffold, Batchelor said he would recommend dual antiplatelet therapy beyond 30 months, likely for 5 years. “Personally, when I see this data, it tells me we probably need protection for longer,” said Batchelor, adding that this strategy is as much as about “treating the physician” as the patient.

PSP Protocol: Does It Make a Difference?

In ABSORB IV, a study that includes 2,604 patients with stable ischemic heart disease or ACS, site investigators strictly adhered to the BVS-specific technique of aggressive predilatation, appropriate sizing of the vessel, and postdilatation. At 30 days, the rate of target lesion failure was 5.0% in the Absorb arm and 3.7% in the Xience-treated patients, meeting the noninferiority endpoint.

Additionally, Stone presented pooled data from ABSORB II, ABSORB Japan, ABSORB China, ABSORB III, and Absorb-Extend, and reported that implanting the device in a properly sized vessel (≥ 2.25 mm and ≤ 3.75 mm, as per the label) was an independent predictor of freedom from target lesion failure through 1 and 3 years and freedom from scaffold thrombosis through 1 year.

To TCTMD, Stone said the Absorb device requires more effort on the part of physicians, but future devices might be easier to implant if they have thinner struts. In ABSORB IV, optimized implantation techniques even improved 30-day outcomes among patients treated with Xience.

“Interventionalists have gotten somewhat lazy in the way they implant devices,” said Stone. “We can still get better outcomes even with better techniques with metallic DES.”

Batchelor said that next-generation products should be designed so as to not require an onerous implantation technique.

“This PSP protocol is great, but when a device gets into the real world in the United States, and the average interventionalist gets his or her hands on it, we have to assume that not all of that stuff will apply,” he told TCTMD. Right now, the current-generation devices are so good any interventionalist can easily implant with very good outcomes, he added.

In an editorial accompanying ABSORB III and PSP meta-analysis, Spencer King, MD, and Bill Gogas, MD, PhD (Emory University School of Medicine, Atlanta, GA), write that while these most recent results are part of a series of disappointing studies with Absorb, the benefits of a BVS lie not in the short term, but rather beyond 3 years. At this point, the stent will have dissolved fully, the vessel returned to normal, and the risk of adverse events with a permanent metal stent is eliminated.

“That will have to become a demonstrated reality rather than a hypothetical speculation for bioresorbable scaffolds to replace metal stents,” write King and Gogas.

Speaking with the media, Ellis said data from his institution suggests that the average patient who receives a drug-eluting stent (excluding patients with prior bypass) lives 17 years. For that reason, it’s hard to imagine that biodegradable scaffolds will completely eliminate the 2% annual recurring risk of major adverse cardiovascular events observed with metallic stents.

*Editor's Note: An earlier version of this story listed incorrect disclosures for Drs Ellis and Stone.

Off Script: Monkey See, Monkey . . . Should Really Do, Before Being Set Loose

ABSORB III: 3-Year Outcomes From a Randomized Trial of a Bioresorbable Scaffold vs a Metallic DES in Patients With Coronary Artery Disease