Lingering questions about the potential for residual ischemic stroke risk with the LAA closure device temper enthusiasm for its use. 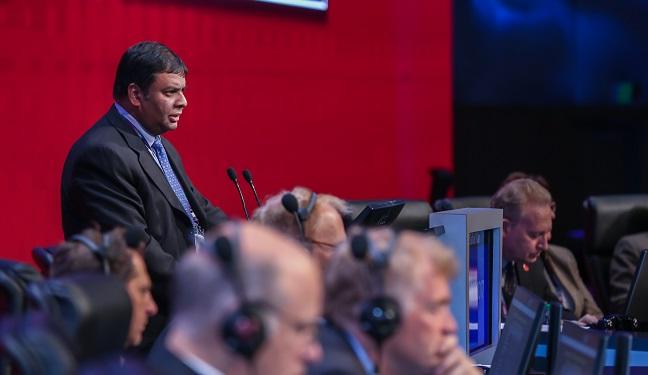 As seen previously, the rate of ischemic stroke/systemic embolism was numerically higher—though not significantly so—with the Watchman device (1.6% vs 0.95%; P = 0.08). Also consistent with prior reports, only one of the two co-primary efficacy endpoints in PREVAIL established the noninferiority of Watchman versus warfarin at 5 years.

“The long-term 5-year outcomes of two randomized trials have demonstrated that left atrial appendage closure with the Watchman device provides stroke prevention in nonvalvular atrial fibrillation patients to a similar degree as oral anticoagulation,” he said during his presentation.

“And by minimizing major bleeding, particularly hemorrhagic stroke, left atrial appendage [closure] results in less disability or death in comparison to warfarin,” he continued. “Therefore, we feel that for patients who are poor candidates for long-term oral anticoagulation—[with] emphasis on the word long-term—left atrial appendage closure is a reasonable strategy for stroke prevention.”

The findings were published simultaneously online in the Journal of the American College of Cardiology.

In concluding his presentation, Kar said, “We have prevailed,” riffing on one of the trial names and alluding to the long journey the Watchman device had to undertake before finally gaining approval by the US Food and Drug Administration (FDA) in March 2015.

In the first randomized trial to evaluate the device—PROTECT AF, which started in 2005 and enrolled 707 patients—Watchman was shown to be noninferior to warfarin for stroke prevention. But there were safety concerns, including increases in serious pericardial effusion and procedural ischemic stroke in the Watchman arm. That prompted the FDA to request a second trial—which became PREVAIL—in a slightly higher-risk cohort, despite one of its advisory panels voting in favor of approval on the basis of the PROTECT-AF results.

The agency allowed investigators to borrow some data from PROTECT AF—which would be incorporated using Bayesian methodology—to limit the size of PREVAIL. The second trial, which enrolled 407 patients, showed fewer complications but provided an inconclusive assessment of efficacy; only one of the two composite efficacy endpoints established the noninferiority of Watchman versus warfarin. Confusing the issue was a lower-than-expected rate of ischemic stroke in the warfarin arm. In 2013, an FDA advisory panel again voted to approve the device, although the agency remained unconvinced.

That led to an unprecedented third vetting by an FDA advisory committee in October 2014, which resulted in unanimous support for Watchman’s safety but a split vote on the question of efficacy. Panelists were concerned about a numerical increase of ischemic stroke in the Watchman arm of PREVAIL. Nevertheless, the device earned the elusive approval of the FDA in the spring of 2015.

As prespecified, both trials had a maximum follow-up of 5 years, and Kar presented the final results of PREVAIL, both alone and in combination with PROTECT AF. Mean follow-up for the 1114 total patients was about 4 years.

As seen in the results of the primary analysis of PREVAIL reported in 2013, the noninferiority of Watchman versus warfarin was not established for the coprimary composite endpoint of stroke, systemic embolism, or cardiovascular/unexplained death at the latest follow-up. However, noninferiority criteria were met for the other coprimary composite endpoint of postprocedural ischemic stroke/systemic embolism.

The numerically higher rate of ischemic stroke with the Watchman remained both in PREVAIL alone and in the meta-analysis of the two trials, and the investigators say in their paper, “Although PREVAIL was not powered to examine differences in ischemic stroke, the question nonetheless remains: why the difference? Did [Watchman] perform worse than expected or warfarin better than expected (or both)?”

To address whether Watchman had suboptimal performance, the researchers plotted expected stroke rates as a function of CHA2DS2-VASc scores, with a line for untreated patients and a line for warfarin-treated patients. They then plotted the point estimates for ischemic stroke in PREVAIL and other Watchman studies and found that the confidence intervals crossed the warfarin line. “Therefore, we don’t think that ischemic stroke was higher than expected” with Watchman, Kar said. He added that if Watchman was not preventing ischemic stroke, events would have increased after postprocedural antithrombotic therapy was stopped, which wasn’t the case.

The difference in ischemic stroke, then, appears to be related to the low 0.73% annual rate in the warfarin arm. Kar pointed out that this is the lowest rate seen in any trial of warfarin, with rates typically ranging from 1% to 2%. The low number of warfarin-treated patients and the wide confidence intervals indicate that the unusually low rate is due to chance, Kar said.

But some experts suggested that it is not realistic to expect a device that occludes the LAA to perform as well as a systemic therapy like warfarin because there are many causes of ischemic stroke.

“Just from a biological plausibility standpoint, I would never expect a device that addresses only one specific cause of stroke to then somehow normalize stroke between long-term anticoagulation and this device, because there are other sources of emboli that don’t come from the left atrial appendage,” Robert Yeh, MD (Beth Israel Deaconess Medical Center, Boston, MA), a panelist at the press conference, told TCTMD. Watchman probably effectively addresses emboli coming from the LAA, but anticoagulation has an additional benefit, he added.

Yeh said that raises the possibility of studying a strategy that combines implantation of the Watchman device to plug the LAA and continued treatment with a low dose of a non-vitamin K antagonist oral anticoagulant (NOAC) to deal with additional causes of stroke.

“Can you get the bleeding benefit and still get the stroke reduction of a left atrial appendage occlusion device? That might be where the sweet spot is,” he said.

Watchman Has a Role in Current Practice

Panelists at the press conference and at Kar’s main presentation debated how Watchman should be used, and there was consensus that it should be judiciously incorporated into practice.

Kar said, “We do agree that this is not a first-line therapy, but those people who . . . cannot, those who will not, and those who shall not take long-term anticoagulation are the people who should have this device.”

Yeh, who cited some uncertainty with the trial results because of wide noninferiority margins, said it comes down to an individualized treatment decision made after weighing the risks and benefits of the device.

“We know that using the device plus withholding anticoagulation severely reduces bleeding,” Yeh said. “It’s important to recognize that, and as a result, I think we have to really be careful in our assessments of individual patients and try to determine what is your bleeding risk, how much benefit am I going to get from this.”

He said it’s unclear how extensive a role Watchman should have. “I think for those patients who are at prohibitive risk for bleeding, this device needs to be discussed,” Yeh suggested. “It’s shown that it can give results that are at least noninferior in this setting, knowing that the noninferiority margins are wide.”

For patients with lower bleeding risks, however, “I don’t think at this point we have any data to support that we should move away from anticoagulation and toward a left atrial appendage occlusion device,” he said.

Robert Sommer, MD (NewYork-Presbyterian/Columbia University Medical Center, New York, NY), said after Kar’s presentation that the current focus of Watchman in clinical practice is on patients who have had bleeding complications related to oral anticoagulation.

“In that context, in patients with high CHA2DS2-VASc scores, I think that’s a no-brainer,” Sommer said. “The patients all want it. The physicians all want it. It’s a very easy decision to make.”

He tells his patients that oral anticoagulation is first-line therapy based on data showing annual stroke rates of 1% or less. Data for Watchman indicate that ischemic stroke rates are higher, at 1.3% to 1.8%, whereas untreated patients have rates in excess of 5%, he noted.

“So while the Watchman device may not provide the absolute reduction in ischemic stroke rate that oral anticoagulants [do], a stroke rate of less than 2% is a whole lot better than no therapy for many of these patients,” Whisenant said.

By Michael O'Riordan
Off Script
TCT 2017

Off Script: Connecting and Collaborating in the Global Village of Interventional Cardiology