Does the abluminal surface, bioresorbable polymer, or patients’ risk profile explain this? One expert remains skeptical. 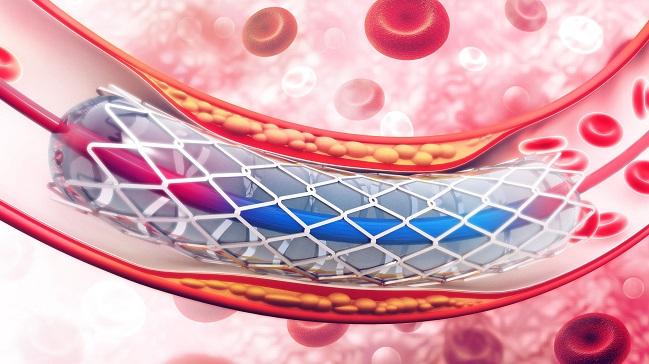 New data from a real-world registry of patients undergoing PCI at a large European center suggest that Synergy (Boston Scientific), a thin-strut everolimus-eluting stent with a biodegradable polymer, is associated with a higher risk of acute stent thrombosis when compared with the Xience everolimus-eluting stent with a durable polymer (Abbott Vascular).

At 12 months, there was no difference in the risk of device-oriented clinical events (DOCE), a composite that includes cardiac death, target-vessel MI, and clinically indicated target lesion revascularization, but definite acute stent thrombosis (< 24 hours after PCI) was observed in 1.2% of patients treated with Synergy and 0.3% of those who received Xience (P = 0.032). The rate of acute stent thrombosis declined over the 12-month study period such that there was no longer a significant difference between devices at 1 year.

“This is really an issue of the acute time period,” senior investigator Lorenz Räber, MD, PhD (Bern University Hospital, Switzerland), told TCTMD. “Care should be taken to mitigate the risk for thrombosis, particularly with this device, by implementing a rigorous periprocedural antithrombotic regimen and to leave behind a perfect treatment result.”

Still, the researchers are cautious in their interpretation of the findings, noting that the registry study carries with it a host of caveats that apply to nonrandomized data. Importantly, it is taken from a single center and is not powered for stent thrombosis. “It’s something that is worth reporting, but it is hypothesis-generating only because of these limitations,” said Räber.

Care should be taken to mitigate the risk for thrombosis, particularly with this device. Lorenz Räber

The new data, which is published today in JACC: Cardiovascular Interventions, runs counter to findings reported from randomized controlled trials. In EVOLVE II and BIO-RESORT, neither study showed an increased risk of acute stent thrombosis among patients treated with Synergy.

Dean Kereiakes, MD (The Christ Hospital Heart and Vascular Center, Cincinnati, OH), lead investigator of EVOLVE II, the pivotal US study that led to the Food and Drug Administration approval of Synergy, said they did not observe any increased acute hazard with the device in their randomized controlled trial. In EVOLVE II, which used the Promus platinum-chromium everolimus-eluting stent (Boston Scientific) as the comparator, there were just two definite acute stent thrombosis events with Synergy, including one in a patient not treated with periprocedural aspirin. The rate of acute stent thrombosis did not differ between Synergy and Promus in the study.

“All I can tell you is that I haven’t seen it,” Kereiakes told TCTMD, referring to acute stent thrombosis. The Synergy struts are thinner, on average, than the Xience struts, he noted, and thinner struts typically translate to a lower rate of stent thrombosis. “There’s no real plausible explanation,” he continued. “Although they tried to match patients as well as possible, the analysis is fraught with challenges. I think it’s a lack of statistical power, the potential play of chance or unmatched variables that [lead to] residual confounding.”

The weight of the evidence supports the safety and efficacy of Synergy, said Kereiakes, noting that the device is more deliverable and flexible than Xience. “In our institution when our doctors were asked which device they chose to use, they picked Synergy,” he said.

Triggered by a Clinical Observation

Speaking with TCTMD, Räber said the registry analysis “was triggered by a clinical observation of potentially more acute stent thrombosis with Synergy.”

While the clinical trials testing the biodegradable-polymer Synergy stent have not shown evidence of an increased risk of acute stent thrombosis, a 2017 analysis from the FDA’s Manufacturer and User Facility Device Experience (MAUDE) database suggested a heightened risk of early thrombotic events with Synergy, particularly within the first 24 hours, said Räber. The TIDE-ACS study, which is yet to be published after being first presented at the 2017 European Society of Cardiology Congress, also hinted at a higher rate of acute stent thrombosis with Synergy compared with the cobalt-chromium Optimax bioactive stent (Hexacath).

All I can tell you is that I haven’t seen it. Dean Kereiakes

“This is an issue of patients at high risk that were not included in EVOLVE II,” said Räber.

To TCTMD, Kereiakes noted that in the published 3-year EVOLVE II data and the 5-year data presented at the American College of Cardiology 2019 Scientific Sessions, both short- and long-term follow-up showed equivalent and low rates of stent thrombosis between Synergy and Promus. While investigators make the case that the difference is driven by high-risk patients who differed from the EVOLVE II patients, Kereiakes noted that BIO-RESORT, which was an all-comers study, also failed to show an increased acute risk of stent thrombosis with Synergy.

“And you have 3,500 patients randomized in BIO-RESORT, which is bigger than this analysis,” he said. “I agree, the [Bern] analysis is truly all-comers, but it is nonrandomized data,” said Kereiakes. Based on EVOLVE II and BIO-RESORT, “the more likely conclusion is that there is really no difference between Synergy and Xience in terms of clinical events out to 5 years,” he added.

In an editorial accompanying the study, Sripal Bangalore, MD (NYU Langone Medical Center, New York, NY), points out that while BIO-RESORT is an all-comers study, the rate of cardiac death at 1 year in that trial was lower than that observed in the Bern PCI Registry, which suggests that the randomized trials enrolled lower-risk patients.

In terms of potential mechanisms for the risk, Bangalore notes that Synergy is coated with an ultrathin, bioabsorbable polymer applied only to the abluminal surface. The design is intended to optimize healing, but the surface of the device exposed to the bloodstream “is in essence a bare-metal stent,” he notes. “Ex vivo studies have shown that metal surfaces are more thrombogenic when compared to biocompatible polymer surfaces.” Xience, the main comparator in several studies, is also known to have several “thromboresistant properties” which could have also magnified the risk versus Synergy, he adds.

Like others, Bangalore states that the registry study has several limitations, and while the cumulative evidence from the randomized trials suggests noninferiority of Synergy compared with contemporary drug-eluting stents in low- to moderate-risk patients, “higher rates of acute stent thrombosis in situations where adequate platelet inhibition is not attained or in cohorts with high thrombogenic potential, such as ACS, should be borne in mind.”

Kereiakes, however, disputes Bangalore’s characterization of the Synergy stent, noting to TCTMD that the device includes design elements that promote rapid stent healing and reduced thrombosis. The abluminal-only PLGA polymer doesn’t completely dissolve for 3 to 4 months, and by the 3-month mark 85% to 90% of struts have endothelial coverage by optical coherence tomography. Regarding the exposure of metal to the bloodstream, Kereiakes said that platinum-chromium has been associated with less platelet adhesion and activation as compared to PVDF fluoropolymer that coats the luminal surface of the Xience stent in ex vivo cell preparation.

“I used to refer to platinum-chromium [devices] as ‘best-metal’ rather than ‘bare-metal’ stents,’” he commented.

Räber stressed their center still uses the biodegradable-polymer Synergy stent—the catheterization lab uses five different drug-eluting stents and alternate stents on a daily basis—but they have started using a more rigorous periprocedural antithrombotic regimen among patients who receive Synergy. For example, they may measure and monitor the activated clotting time—aiming to keep it longer than 250 seconds—rather than administer a standard dose of heparin. If there is any suspicion of clot formation, “we have a low threshold to visualize the stent using optical coherence tomography,” said Räber. “That threshold might be a little bit lower with Synergy. If thrombus formation is a concern, we would consider the use of a glycoprotein IIb/IIIa antagonist.”