The American workforce lags behind in basic CPR and first aid skills, and it’s up to physicians to be advocates, experts say. 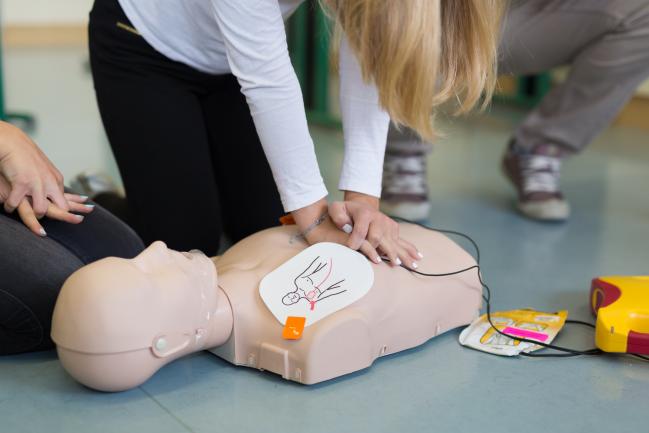 Most American workers lack the CPR and first aid skills needed to handle cardiac arrests and other cardiac emergencies, according to results from two recent American Heart Association (AHA) surveys.

“The data suggests these untrained employees may be relying on their untrained peers in the event of an emergency, leaving employees with a false sense of security that some in the workplace will be qualified and able to respond, when that is clearly not the case,” said Michael Kurz, MD (University of Alabama, Birmingham, AL), co-chair of the AHA’s Systems of Care Subcommittee, in a press release.

Over 350,000 cardiac arrests occur outside of a medical facility each year, with 10,000 of these happening in the workplace, according to the AHA. Kurz told TCTMD that the survey results highlight both a lack of awareness over automated external defibrillators (AEDs) in general and of “their location in our public places, where we spend lots of time.” Moreover, he said, the findings show that employees need more training in how to actually do CPR and use an AED, because most safety managers reported that they were asked by employees to provide training only after an event had occurred.

Both online surveys—which in combination got more than 3,000 responses from February to April 2017—were commissioned by the AHA and released to the public on June 19.

One of the AHA surveys reached out to 1,052 US Occupational Safety and Health Administration safety professionals, of whom 636 completed the study. About 33% of the safety managers said that they have saved lives at home and at work because of their CPR, AED, and first aid skills, while 75% reported treating injuries and medications at work with their training. Moreover, 36% of safety experts felt that training should be offered more often than every 2 years, which is the current regulation. The survey results also indicated that younger workers were not as likely to join trainings on CPR, AED, and first aid, although 44.5% of them had participated in the past.

The AHA’s other questionnaire involved about 2,000 employees working in corporate office, hospitality, and education among other settings. Over 55% of the respondents said they were unable to receive first aid or CPR and AED training at work. When the training was offered, 55% of employees given the chance to receive it said the training was only for CPR or only for first aid, not both. Half of the employees indicated that they were unable to find an AED in the workplace, while 66% working in the hospitality industry couldn’t locate an AED. More than 90% of employees were willing to participate in first aid and CPR and AED training when their employers offered it, and 70% felt that it would better equip them to handle workplace crisis.

Sheila Sahni, MD (University of California Medical Center, Los Angeles), noted to TCTMD that the findings present an opportunity for employers, but not necessarily for cardiologists. If anything, they could inspire cardiologists to begin to “tell patients what an AED looks like [since] that’s something that the survey highlighted that’s an absolute need,” she said.

To TCTMD, Kurz recommended that clinicians start by asking their patients if they know how to perform CPR and if they know where an AED is in the workplace. “Because we [as clinicians] are so familiar with these techniques and this technology, the misperception is that everyone therefore is,” he said, adding, “And frankly as this survey demonstrates, unfortunately, that is not the case.”

One effort in the works, Kurz said, is an AHA advocacy campaign that relates to “just in time” instructions for CPR. The idea is that state and local governments can adopt standardized approaches, so that 911 dispatchers can more readily help bystanders know what to do in an emergency. “That way more folks will receive CPR ‘just in time’ instructions when it matters most,” he said.

Only One Third of US States Require AEDs in Schools

Defibrillators in Flight: Drones May Someday Save Lives in Hard-to-Reach Cardiac Arrest