Whether the benefit is due to Impella itself or to the systematic, team-based approach remains to be seen.

“Although we’ve made a great improvement in outcome for patients with STEMI, patients who come in in shock, with or without cardiogenic shock, still have very high mortality,” O’Neill told attendees. The death rate for AMICS patients has hovered around 50% for three decades, he pointed out. 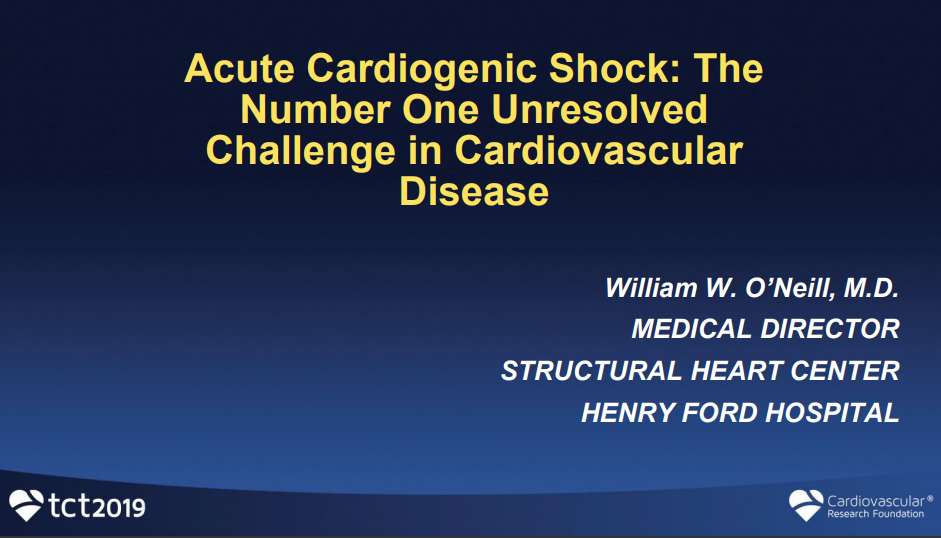 The new NCSI data—gathered starting in mid-2016 and showing a survival rate of 72% among 250 patients—suggest a “light at the end of the tunnel in terms of finally making an advance for this condition,” he added.

Ankur Kalra, MD (Cleveland Clinic, OH), gave a presentation at TCT looking at US data on more than 400,000 cardiogenic shock patients between 2012 and 2015. For the subset with AMICS, the in-hospital mortality rate was only 38% during those earlier years and mechanical circulatory support (MCS) use was spotty.

TCTMD asked Kalra what to make of the latest NCSI numbers presented by O’Neill.

Kalra, who noted that his group’s analysis was based on the National Inpatient Sample, said he believes the most likely explanation for the shift in survival—one that has proven successful—is the combination of a systematic approach to shock with early initiation of MCS and the expertise of a multidisciplinary team that includes not only an a general cardiologist but also an interventionalist, a cardiac surgeon, and an intensivist.

“I don’t think it’s the [Impella] device per se, I think it’s a multitude of factors. That dramatic of a shift in just a year isn’t the function of a device alone,” he commented.

But O’Neill, an early advocate of percutaneous support devices, attributed the recent survival gains not just to early identification of cardiogenic shock but also to prompt use of Impella (Abiomed) followed by PCI. “We now have 80 hospitals around the country that are following the same protocol, and we’ve been tracking the outcomes over the last year and a half,” he told TCTMD. “Consistently, we’re maintaining survival of about 70%.”

As of September 2019, 79 sites (65% community hospitals) across the United States were taking part in the NCSI and another 16 were slated to join soon. More than 500 patients with AMICS have been screened since July 2016. A total of 250 have enrolled, comprising the data set analyzed here. The main reasons for exclusion included no revascularization, no acute MI (n = 93); intra-aortic balloon pump prior to MCS (n = 71); unwitnessed arrest, anoxic brain injury (n = 35); MCS device not used (n = 28); and septic shock (n = 11). Fewer than 10 patients each were excluded due to having a mechanical complication, active bleeding, nonischemic shock, major recent surgery, LV thrombus, mechanical valve, or other reasons.

These exclusion criteria, O’Neill said, “basically mimic” those of prior trials in this area so as to have an “apples-to-apples comparison.” He described the participants as in severe shock, with blood pressure levels of 78/51 mm Hg and lactate levels of 5.3 mmol/L on average. Nearly three-quarters had a lactate level ≥ 2 mmol/L, and 40% were in cardiac arrest.

Fully 69% of the 250 patients received Impella (Abiomed) pre-PCI, with a door-to-support time of 93 minutes. TIMI III flow was achieved in 90%. One key aspect of the protocol was trying to maintain cardiac power output (CPO) above 0.6 watts, O’Neill said, noting that earlier research has suggested “CPO is really one of the most important determinants of survival.”

If you follow our protocol, you’re going to get consistently better outcomes than what is currently available, just doing angioplasty with or without a balloon pump. William O’Neill

Stratified by hemodynamics, patients with CPO ≥ 0.8 watts had a survival rate of 86% without inotropes and those with CPO ≤ 0.60 watts had survival rates of 44% and 25% with one or at least two inotropes, respectively.

Equally important, he continued, is the level of lactate washout seen at 12 to 24 hours. Patients who had lactate levels < 4 mmol/L and CPO > 0.6 watts had a survival rate that reached 94%, whereas survival on the opposite end of the spectrum, when patients had persistently elevated lactate levels ≥ 4 mmol/L and CPO ≤ 0.6 watts, was a mere 28%. “So we’re seeing that we can rapidly make determinations for survival and triage decisions,” O’Neill said.

To TCTMD, he explained: “We kind of know that about two-thirds of the patients are going to do well and we’re trying to figure out the other one-third that are problematic. So our next phase of investigations is to try to more aggressively escalate care. The patient should leave the cath lab with a normal cardiac output [and] not in shock in order to maximize chances of survival.”

In that substudy, known as CERAMICS, patients with CPO ≤ 0.80 watts who require at least one inotrope despite having undergone PCI and receiving Impella CP will then be given more-intensive support in the form of Impella 5.0, potentially with the addition of extracorporeal membrane oxygenation (ECMO). Those with CPO > 0.80 will receive standard of care.

CERAMICS is now being submitted to institutional review boards for approval, with the expectation of starting to enroll in early 2020, O’Neill said.

What Role Does Impella Play?

Kalra said that a systematic approach to cardiogenic shock could be replicated widely across centers, even those not already participating in NCSI, with STEMI care as a model.

“Obviously the skepticism [I have] is with regard to the device, because the device is not a cheap device. All of us know that: it’s a $25,000 device,” Kalra noted, adding that to date there have been no large randomized controlled trials with hard endpoints demonstrating that Impella is superior to other MCS options. Thus, any of the data suggesting a survival benefit with Impella can only be hypothesis-generating, he stressed.

That said, “as a proceduralist in the cath lab, hemodynamic stability means a lot,” Kalra observed. “When you are alone in the middle of the night with a crashing patient, anything that stabilizes the night for you and saves the day is huge.

“So, do I use Impella? I do,” he continued. “Are there data which are randomized and are convincing for a mortality benefit? No. Does it lead to hemodynamic stability during the procedure? Absolutely it does. Does it save the patient in the imminent scheme of things? It does, but does it really save the patient? I think the answer is no, and I’ll be very honest: I mean, I’ve had patients who have come in with massive infarcts and we’ve kept them on the Impella device for a week and we’ve still lost them,” he said. “So it’s tough.”

To systematically recommend a device for routine use without data is tough. Ankur Kalra

From an “eagle’s-eye view,” the desire to be cognizant of healthcare resources is still there, Kalra said. “Some may argue a life saved is not even a question: a life saved is a life saved. I get that. I understand that. But to systematically recommend a device for routine use without data is tough.”

He added: “I would love to be proven wrong. . . . We all desperately need a therapy that actually has a mortality benefit in cardiogenic shock.”

O’Neill reminded TCTMD that it would be difficult to do an RCT on cardiogenic shock in the United States—and indeed the barriers have been the focus of much discussion—due to requirements for informed consent.

He estimated that 15% of AMICS patients eligible for Impella currently receive the therapy. “Partly it’s too new, partly people are looking to get more data, and partly there’s a lack of certainty about [how to use] the Impella device,” O’Neill explained. Overall, around 10% of patients with AMICS receive MCS in the form of ECMO or a percutaneous ventricular assist device, he said. “As data like ours start to become more widely known, I think there will be an increase. . . . If you follow our protocol, you’re going to get consistently better outcomes than what is currently available, just doing angioplasty with or without a balloon pump.”