The trial won’t provide a final answer for clinicians struggling to care for these patients, but it’s a step in the right direction. 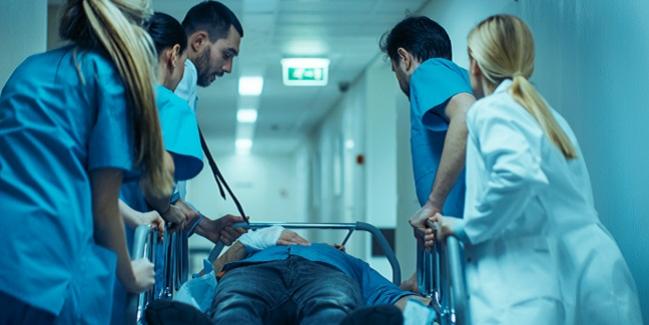 Investigators for the DanGer trial are spreading the word on their plans to test Impella—notably, in a randomized, controlled fashion—in patients with acute MI complicated by cardiogenic shock (AMICS) at centers not only in Denmark but also in Germany.

Enrollment in the expanded trial is only just beginning, and data aren’t expected for 3 to 4 years, but already experts told TCTMD that they hope DanGer will provide much-needed clarity for a difficult-to-manage patient subset.

Impella (Abiomed) is the only form of mechanical circulatory support that has cleared the hurdle of US Food and Drug Administration premarket approval for use in cardiogenic shock, but multiple challenges thus far have thwarted a randomized controlled trial.

“It’s been a very long process,” Jacob Eifer Møller, MD, PhD, DMsc (Copenhagen University Hospital Rigshospitalet, Denmark), DanGer’s principal investigator, told TCTMD. “It’s a very challenging study to enroll patients. We had hoped to be done by now in Denmark but have realized that the enrollment is much, much slower than expected. And that’s why we have expanded into Germany as well. It’s just a matter of having more size.”

DanGer originally started out as the DanShock trial, which was funded by the Danish Heart Association and kicked off in January 2013. Yet, by the end of June 2018, only 100 patients had been enrolled. Additional funding from Abiomed enabled expansion into Germany, at which point the study received its new name. As noted in the AHJ paper, “the funders have no influence on the design of the study, data analysis, data interpretation, or drafting of manuscripts. The trial will be monitored by an independent Data Safety Monitoring Board [DSMB].”

Møller confirmed that, apart from expansion and now having the money to afford dedicated personnel such as study nurses and clinical trial coordination, nothing has changed. “It’s still an investigator-[run] trial. My institution is the sponsor of the study, and it’s the same steering committee. It’s the same protocol as what we made 5 years ago,” he said, adding that in both countries, Impella is reimbursed by national healthcare systems.

Daniel Burkhoff, MD, PhD (Cardiovascular Research foundation, New York, NY), who is not involved in DanGer, said he was impressed by its design.

“In the shock world, it’s a very well thought out study,” he commented to TCTMD. “It has been masterfully administered in Denmark at this point. [Although] no one knows the data, it’s very encouraging that after 100 patients I’m sure that they must know something about the results and that the DSMB hasn’t said ‘Stop.’ They say, ‘Keep going.’ That’s very encouraging. Who knows what that means. But this is a very pivotal effort.”

Such a trial would be difficult to conduct in the United States, where standards on informed consent are stricter, Burkhoff noted. DanGer employs a “stepwise informed consent process,” wherein a family member gives consent on behalf of the patient or the patient retroactively agrees to take part in the trial.

“Doing randomized trials in patients with cardiogenic shock—as you can imagine these are the sickest of the sick patients that we see in the hospital—is not the easiest thing to do,” he commented to TCTMD. “That’s why we don’t have a lot of randomized trials done in this setting.”

While DanGer can’t possibly answer every question, Desai said, it will move the field forward. “We desperately need more and higher-quality evidence in this space. This will certainly contribute to our understanding of the optimal management of patients that have acute MI and cardiogenic shock,” he predicted.

DanGer: The Nuts and Bolts

With a primary endpoint of all-cause mortality at 180 days, DanGer is slated to enroll 360 patients randomized to Impella CP or conventional treatment. The anticipated mortality rate is 60%, given the severity of AMICS patients being enrolled, and the estimated treatment effect of Impella is an absolute mortality reduction of 18%. If the event rate is lower than anticipated, enrollment will continue until 165 deaths have occurred.

In terms of statistical power, Desai said, “this is about on par with what other trials in this space have done.”

One noteworthy feature of the study is that it excludes patients who experience out-of-hospital cardiac arrest and remain comatose. These patients are likely to have anoxic brain injury, Møller explained. “We don’t believe we can modify that with circulatory support.”

Burkhoff agreed with this decision. “One of the main issues with the prior IMPRESS study was that most of the patients had out-of-hospital arrest and died of anoxic brain damage. So the point is, you don’t want to treat people who are brain-dead and then have them count against the therapy. That’s really a key thing,” he observed.

Also important, Møller and Burkhoff said, is that patients randomized to Impella support will receive the device immediately, prior to PCI. Several studies have suggested that early placement of Impella improves survival. Unless there are complications, the Impella device will remain in place for 48 hours. The idea is to “give the heart rest, to recover, instead of taking it out much faster,” Møller noted.

Patients in the control arm will undergo revascularization and receive medical therapy including inotropes and other vasoactive drugs. If they remain hemodynamically unstable, treatment might be escalated to extracorporeal membrane oxygenation (ECMO) or a left ventricular device—crossover to Impella CP or 2.5 is strongly discouraged.

Desai, however, pointed out that early Impella placement in the treatment arm might unfairly tilt the balance. “One of the things that you can’t help but notice is they have set this up as an experiment of the Impella . . . versus essentially medical therapy,” rather than Impella in comparison to usual care. Today, although routine use of intra-aortic balloon pump therapy is no longer recommended in AMICS due to results from IABP-SHOCK II, selective use still occurs in patients who need extra support, such as those with ongoing hemodynamic instability.

That said, the baseline characteristics of the first 100 DanGer patients suggest that the trial is indeed successfully enrolling “the sickest of the sick,” Desai noted. All patients had lactate > 2.5 mmol/L, and the median LVEF was 20%.

Will the Dust Settle?

Even if DanGer proves positive, will it cement the role of Impella in AMICS? Will the data calm critics? That’s impossible to predict, Burkhoff said.

Every trial has its limitations, he noted. “People who don’t like the results of a study are always going to find something. I’m just always shocked, how despite a randomized trial showing balloon pump doesn’t work, it remains the number one device that’s used in shock. So what does that say? There’s been all these tweets and whatnot [asking], ‘Where’s the evidence?’ And when the evidence is there, they ignore it. When they don’t like what they find, they ignore it. How do we protect against that kind of backlash either way?”

Whatever the reaction is to DanGer, Burkhoff stressed, it will not detract from its importance.

Desai, likewise, agreed that DanGer will contribute to the literature. But existing Impella devices are not the only player in this space—ECMO, TandemHeart (LivaNova), another iteration of Impella, or even a completely new strategy may prove useful in AMICS, he said. “It’s such a dynamic area, it’s such a complex area. People are always looking for answers. . . . There’s also a lot of activity in this space and there’s a lot of development in this space.”

For Møller, a randomized controlled trial is a crucial opportunity to better understand what can be done to improve the outcomes of patients with AMICS.

“I’ve been working in intensive care for 10 years and in all that time we haven’t really improved the outcome of these patients significantly,” he said. “The only way to do that is to do these kinds of studies where we gain knowledge. The Impella makes great sense, but so did the balloon pump and that turned out to not do the job. I’m a really, really strong believer in that we have to do these controlled trials in these patients. And it’s just desperate to see the mortality is still more than 50%.”

As Desai concluded: “The race to do things better for our patients, I think, continues on.”

Yesterday, Abiomed announced that the FDA has approved its Impella 5.0 and LD devices for up to 14 days of use in cardiogenic shock. The company has also recently announced that it received FDA sign-off to initiate a separate randomized trial, dubbed STEMI DTU: a prospective, multicenter, two-arm trial designed to enroll 668 patients undergoing PCI for STEMI. Half of the patients in the trial will be randomized to receive delayed reperfusion after 30 minutes of left ventricular unloading with the Impella CP, with the other half undergoing immediate reperfusion, which a company press release notes is the current standard of care.