Researchers believe the phenomenon may be caused by microvascular spasm and that future trials testing calcium-channel blockers are warranted. 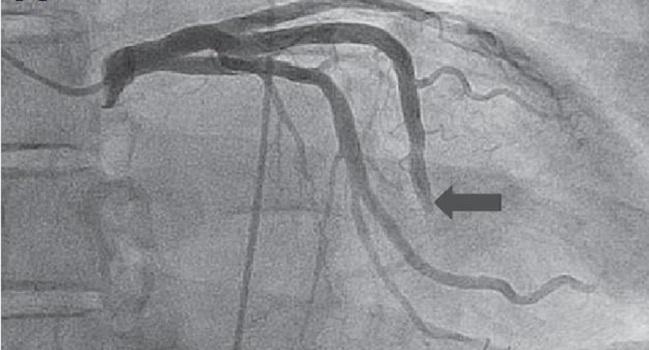 The coronary slow-flow phenomenon, defined as spontaneously delayed flow in the absence of obstructive coronary artery disease, can be effectively treated with the channel-channel blocker nicardipine, Among patients with angiographically normal or near-normal coronary arteries but with abnormal TIMI flow, a 200-µg intracoronary bolus of nicardipine accelerated coronary filling and improved coronary blood flow in all treated patients, report researchers.

Senior investigator Michael Savage, MD (Thomas Jefferson University Hospital, Philadelphia, PA), said their group previously showed that nicardipine, which has selective vasodilatory effects, can improve coronary flow and reverse no-reflow complications in PCI. For this reason, they hypothesized that nicardipine might be effective in patients with impaired flow but without evidence of obstructive epicardial coronary disease.

“It struck us that [slow flow] was similar to what we see when we stent an atherosclerotic lesion, but we have the no-reflow phenomenon even though the artery is fully open,” said Savage. The no-reflow complication, which is believed to result from the microembolization of plaque or thrombotic debris, which then leads to microvascular spasm, is treated with an intracoronary injection of one of various vasodilators, the most common being a calcium-channel blocker.

“So the lightbulb went off,” said Savage, referring to their decision to use nicardipine in this setting.

The retrospective study, which was published online before print December 15, 2018, in the Journal of Invasive Cardiology, included 30 patients with angiographic evidence of spontaneously delayed flow treated with the calcium-channel blocker. The majority of patients (n = 21) presented with angina at rest. Coronary blood flow before and after nicardipine was evaluated by TIMI flow grade and corrected TIMI frame count assessments (with TIMI < 3 and TIMI frame count ≥ 28 considered abnormal). At baseline, TIMI flow < 3 was observed in all patients (49 epicardial coronary arteries).

Shamir Mehta, MD (McMaster University, Hamilton, Canada), who was not involved in the study, said coronary slow flow is a “real entity that we see occasionally in the cath lab.” These patients present with symptoms suggestive of angina as well as with cardiac risk factors. Smoking, in fact, is quite common in such patients, he noted. Often intracoronary nitroglycerin is administered without any improvements in flow.

“These patients are usually managed by treating risk factors, such as smoking cessation, statins, et cetera. Sometimes calcium-channel blockers are used if microvascular spasm is suspected,” said Mehta. “The study is interesting but quite small and retrospective. What I like about it is that it seems to suggest that microvascular spasm is responsible for the slow flow. This may prompt a trial of calcium-channel blockers.”

To TCTMD, Mehta noted that an angiogram that shows apparently normal coronary arteries doesn’t completely rule out coronary artery disease, however. Further imaging, such as with optical coherence tomography or intravascular ultrasound, would be needed to definitively exclude coronary disease, he said.

Rodrigo Bagur, MD (Western University, London, Canada), who was also not involved in the study, noted that spontaneous slow flow might be responsible for the patient’s chest pain, but added that other conditions, such as endothelial dysfunction and diabetic cardiomyopathy, can cause angina symptoms in the absence of significant epicardial obstructive disease. These patients are typically treated with ACE inhibitors/angiotensin receptor blockers, calcium-channel blockers such as amlodipine or long-acting nifedipine (nicardipine is not available in Canada), and/or nitrates, said Bagur.

To TCTMD, Savage said the prevalence of spontaneous coronary slow flow hasn’t been systematically studied, but one estimate suggests it may be responsible for 4% of unstable angina admissions. “I think it’s less common than that,” said Savage, “and I think that’s one of the reasons why this entity is still underrecognized, even by cardiologists.”

The clinical management of spontaneous slow flow can be challenging for physicians. Most of the patients present as if with an acute coronary syndrome and some patients might even have troponin elevations, said Savage. “There’s a very high recurrence rate,” he commented, noting that one study suggested 80% of patients with have chest-pain recurrences and 20% will be rehospitalized within 2 years. Savage added that more research is still needed to determine the best long-term therapy for patients with the condition.