No TREAT for Ticagrelor at 12 Months: Fibrinolysis Patients After STEMI Do Just as Well on Clopidogrel 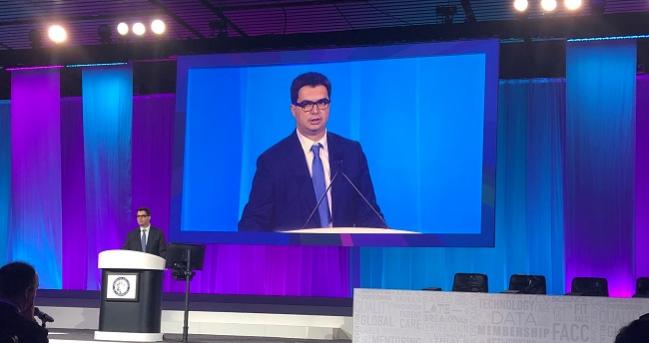 NEW ORLEANS, LA—Twelve-months of ticagrelor among older STEMI patients first treated with fibrinolytics offers no benefit over 12 months of clopidogrel, extended results from the TREAT trial show. Cardiovascular event rates were similar between groups, and no differences were seen in rates of major bleeding.

Earlier results from the TREAT trial, as reported by TCTMD last year, provided reassurance to physicians unsure whether patients initially managed with a lytic could be treated with the more potent ticagrelor. The large, randomized PLATO trial excluded patients treated with fibrinolytics, while the CLARITY and COMMIT trials that established the safety of clopidogrel following lytics are now a decade and a half old.

But the TREAT extended results, presented here at the American College of Cardiology 2019 Scientific Session, failed to show what some, no doubt, were hoping for: namely, that continued ticagrelor would beat out clopidogrel in this group.

Otavio Berwanger, MD (São Paulo Cardiac Hospital, Brazil), who presented the data, characterized the findings as unresolved. “We could discuss whether this is a definitive result or underpowered,” he said. At least in TREAT, he said, for patients aged under 75 years with ST-segment elevation myocardial infarction, administration of ticagrelor after fibrinolytic therapy may not reduce the frequency of major cardiovascular events at 12 months when compared with clopidogrel.

The 12-month results were simultaneously published in the Journal of the American College of Cardiology.

TREAT was conducted in 10 countries worldwide including a mix of developed and developing nations. Investigators enrolled 3,799 patients under the age of 75 and treated with fibrinolysis. They were then randomized to 180 mg ticagrelor (Brilinta; AstraZeneca) as early as possible after the index event (within 24 hours) then followed by 90 mg twice daily for 12 months, or to 300 mg of clopidogrel as early as possible followed by 75 mg/day for 12 months. Fibrinolysis was typically initiated within a mean of 2.6 hours in both groups, while study-drug randomization typically occurred within 11.5 hours of fibrinolysis.

For the combined endpoint of CV death, MI, stroke, severe recurrent ischemia, TIA, or other arterial thrombotic events, no differences were seen between clopidogrel and ticagrelor at 12 months.

“This is a definitive neutral study but there’s room for uncertainty here,” Berwanger said in a press conference following his presentation. “In my hospital we use ticagrelor mainly, but when we have a patient postlytic, everyone says, ‘oh, well, now we need to use clopidogrel,’ so at least it’s reassuring that it’s safe and [the composite CV event rate] goes in the same direction as PLATO. I’m not conveying that we should switch everyone to ticagrelor, but at least we have another option. It may be useful in some circumstances, but people have to use their judgement, the evidence, patient preferences, cost, and other issues.

During the press conference, discussant Claire Duvernoy, MD (VA Ann Arbor Healthcare System, MI), said that her takeaway from these 12-month results is “a little bit different” than Berwanger’s.

Clearly my hospital administrator wouldn’t thank me if I said I was going to start using ticagrelor in everybody. Claire Duvernoy

Ticagrelor is the more expensive drug. If both are options, Duvernoy quipped, “clearly my hospital administrator wouldn’t thank me if I said I was going to start using ticagrelor in everybody.”

Berwanger agreed, noting that “there’s a lot of regional differences.” While a pharmacoinvasive strategy is used in countries like Australia and Canada in 70-80% of patients, in Latin America, China, and Russia, that’s closer to 40%, he said.

“Even in the United States, there is wide regional variability,” Duvernoy chimed in, noting that lytics are still widely used in Alaska, “because they just can’t get patients to PCI centers.”

SAFARI Surprise: No Survival or Bleeding Advantage With Radial Over Femoral Access in STEMI

TREAT: No Major Bleeds With Ticagrelor in ACS Patients After Fibrinolysis