OAC-ALONE: No Clear Answer for Best Therapy Beyond 1 Year After PCI in A-fib Patients

Slow enrollment led to a premature end to the study, making it difficult to draw firm conclusions. 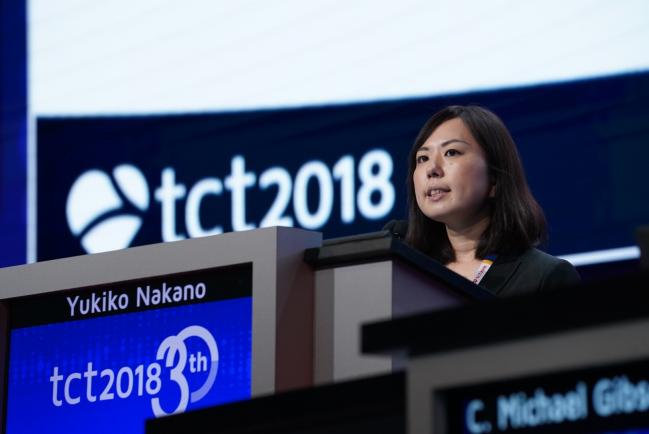 SAN DIEGO, CA—An attempt to clarify the best approach for antithrombotic therapy in patients with A-fib who are stable more than a year out from coronary stenting fell flat after slow enrollment led to an early end to the study, making it difficult to draw firm conclusions.

The Japanese trial, OAC-ALONE, did not establish the noninferiority of oral anticoagulation alone versus a combination of anticoagulation and single antiplatelet therapy for a the primary composite endpoint of all-cause death, MI, stroke, or systemic embolism (15.7% vs 13.6%; P = 0.20 for noninferiority) due to an insufficient sample size, Yukiko Nakano, MD (Kyoto University Graduate School of Medicine, Japan), reported here at TCT 2018.

“Therefore, the primary hypothesis of the present study was inconclusive,” she said.

That indicates “that combined OAC and single [antiplatelet therapy] is unlikely to provide net clinical benefit over OAC alone,” Nakano concluded. “Thus, OAC alone might be reasonable for patients with atrial fibrillation beyond 1 year after coronary stenting.”

The findings were published simultaneously online in Circulation.

Conclusion ‘Right One’ Despite Limitations

Commenting for TCTMD, American College of Cardiology spokesperson Deepak Bhatt, MD (Brigham and Women’s Hospital, Boston, MA), pointed out that standard practice in this setting varies around the world. American doctors tend to use a combination of oral anticoagulation and antiplatelet therapy after 1 year, whereas physicians from Europe and other parts of the world tend to use anticoagulation alone to limit bleeding. Bhatt said his standard approach is to use full-dose anticoagulation without antiplatelet therapy after 1 year.

The practice of using anticoagulation alone is based on older MI trials of warfarin showing that the addition of aspirin increased bleeding without enhancing efficacy, and in the absence of newer, robust trials, it makes sense to go with that strategy, he said.

Asked whether the trial—which was limited by the premature stop, the lack of statistical power, the failure to establish noninferiority for the primary endpoint, and differences in INR targets between Japan and other parts of the world—is likely to induce US doctors to change their practice, Bhatt said it might.

“I don’t think the data actually are that compelling and I don’t actually think practice should change based on this trial, but on the other hand, it sort of reaches a conclusion that I think is the right one despite that,” Bhatt said. “That is, I think in the absence of someone doing a large, contemporary trial showing that such patients should be on a full-dose anticoagulant plus an antiplatelet, I wouldn’t just do it. . . . Not everyone does it this way in the US, but that predominant practice of combining agents I do think should change.”

Questions remain about optimal antithrombotic therapy in patients with A-fib who undergo PCI, who have indications both for oral anticoagulation and dual antiplatelet therapy with aspirin and a P2Y12 inhibitor.

Recent trials—such as WOEST, PIONEER AF-PCI, and RE-DUAL PCI—have focused on what should be done in the first year after PCI, showing that dual therapy with an anticoagulant and a P2Y12 inhibitor lowers bleeding risk without increasing thrombotic events compared with triple therapy.

But there is still uncertainty about the best approach beyond 1 year. Guidelines and expert consensus statements out of Europe and North America favor anticoagulation alone, but use of additional antiplatelet therapy is common.

To try to fill the need for randomized data to inform the issue, the OAC-ALONE investigators set out to enroll 2,000 patients with A-fib more than year out from coronary stent implantation, who would be randomized to oral anticoagulation with warfarin or a direct oral anticoagulant (DOAC) alone or to anticoagulation plus single antiplatelet therapy with aspirin or clopidogrel. Due to slow enrollment—attributed mainly to a reluctance on the part of physicians to stop antiplatelet therapy in their patients—the trial was stopped after 696 patients were enrolled at 111 centers in Japan.

Average patient age was 75, and 85% were men. On average, patients underwent PCI 4.5 years before the study. The anticoagulant was warfarin in 75% and a DOAC in the rest. Antiplatelet therapy was mostly aspirin (86%).

Median follow-up was 2.5 years. Although there were no significant differences between trial arms in clinical or bleeding outcomes, patients who received anticoagulation alone tended to have higher rates of death, CV death, MI, and stent thrombosis, and lower rates of stroke/systemic embolism, ISTH major bleeding, and TIMI major bleeding.

Bhatt said that even though practice should not be altered on the basis of this trial, OAC-ALONE could serve as a platform on which to build future studies. “The question is important, but it would really require a well-designed trial to nail it down,” he commented.