How to tackle peripheral disease in the current climate, as well as the skill set needed for high-risk CAD, got a thorough review. 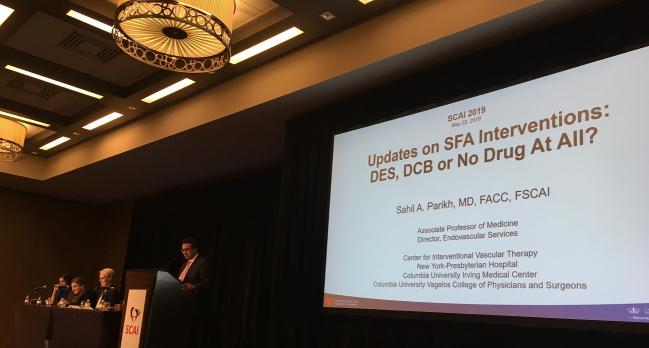 LAS VEGAS, NV—What path do clinicians take now that paclitaxel-eluting devices in PAD are under scrutiny? And what’s the best role for complex, high-risk indicated procedures (CHIP) in interventional cardiology? The Society for Cardiovascular Angiography and Interventions (SCAI) kicked off its 2019 meeting yesterday with discussions tackling two of the most controversial topics in the field.

Sahil A. Parikh, MD (NewYork-Presbyterian/Columbia University Irving Medical Center, New York, NY), got things rolling with an overview of how PAD treatment evolved up until the meta-analysis by Katsanos et al was published in December 2018. The now-infamous study pointed to a potential increased risk of all-cause mortality with use of paclitaxel-based drug-coated balloons (DCBs) and stents in patients with femoropopliteal artery disease.

“We had this sort of Chinese food menu of options for the therapy of [superficial femoral artery], ranging from angioplasty all the way to facilitated drug delivery with either stents or balloons,” he recalled, noting that before December, upwards of 90% of his patients with femoropopliteal disease were receiving drug-eluting technology.

The data aren’t perfect but the optics . . . have really challenged the veracity of our belief in the data. Sahil A. Parikh

Then came the Katsanos meta-analysis—Parikh characterized it as “fraught with challenge,” particularly since a high number of patients had been lost to follow-up. “For those of us in the coronary field, . . . this seems a lot like 2006 all over again, in that there is a controversy about the safety of a new drug-eluting technology and the data are less than optimal,” he said.

The US Food and Drug Administration has, in the interim, issued two warning letters—an initial acknowledgement of potential uncertainties in January and a sterner notice in March stating that the risk of using paclitaxel-eluting technology may be greater than the benefit. An FDA advisory panel meeting has been scheduled for next month to discuss the issue further.

All of this activity “has resulted in a drop in penetrance of these drug-eluting technologies by approximately 50-60% in the United States,” Parikh reported, estimating that only about 25% of the patients in his clinical practice are now receiving these devices. “For the critical-limb patients, we're using it more, particularly in those who are subject to having repeat revascularization where we really need to reduce the number of procedures. So in either physiologically older, which means either highly complex or really [elderly] patients, we’re using DCBs and DES a little more liberally than in the younger claudicant, where we're really either kicking the can down the road trying to get them to do noninvasive therapies as much as possible while the dust settles, or we're trying to use limited amounts of drug-delivery technologies.”

With the available information, “we have to acknowledge that in these large, randomized controlled data sets, there appears to be mortality signal in terms of all-cause mortality for drug-eluting technologies,” Parikh said. “The data aren’t perfect but the optics . . . have really challenged the veracity of our belief in the data. There remains no putative mechanism to explain the relationship, and there is really no good evidence that dose is a determinant of clinical efficacy or safety.” An ongoing patient-level meta-analysis supported by VIVA will be presented at the FDA panel, he said. Yet “at the moment, clinical practitioners are left to use devices selectively.”

“I find this whole situation pretty fascinating,” said session panelist and meeting chair Sunil Rao, MD (Duke University Hospital, Durham, NC), following the presentation. Likening today's controversy to the 2006 'firestorm' over complications with DES in coronary artery disease, he said “there was the drug-eluting stent trial where 5 years after the initial report they realized they didn't actually reverse the mortality rates. The mortality rate was actually higher in the drug-eluting stent arm, and I’m sure that lead to an ‘oh crap’ moment for all the investigators, too, which obviously makes things very, very complicated.”

Parikh agreed. “There’s been a clear drawing of partisan lines. The surgical community, as you can imagine, has circled the wagons and some are calling this ‘paclitaxel-gate,’” he said. “It certainly demonstrates that there are challenges between the different practitioners in the space and also the fact that the data quality isn't at the same level. [For] example, the coronary DES trials ascertainment of endpoints is in the high 90s, and here we have loss to follow-up rates up to 30% in some of these data sets.”

Panelist Ajay Kirtane, MD (NewYork-Presbyterian/Columbia University Irving Medical Center), also urged caution in interpreting the data. “That’s really important because any parallels that are drawn to another episode, 2006, it starts falling apart when you actually start looking at loss to follow-up and things like that,” he said. “I think it’s convenient to say that it's similar that way, but in many respects it’s very different.”

Since the March FDA warning letter, investigators of several paclitaxel devices have gone back and tried to track down patients lost to follow-up in the trials, Parikh reported. “As you can imagine, that’s a bit of revisionist history, and it's a little bit challenging,” he said. “So we'll see if FDA wants us to do a DAPT-like prospective study or some other kind of registry study and where the field is going.”

CHIP and the Future

Next, speaking on the emerging field of CHIP, Kirtane started by addressing critics’ concerns. “Very often the perception of the CHIP movement in a sense is: do a lot of procedures—they may not be indicated, but go forward with it—and that’s not really what we had in mind when we started talking about this,” he explained.

Kirtane said he believes there is evidence of undertreatment in patients with severe CAD who are given medical therapy without ever being presented the option of PCI. Specifically, he cited 2014 evidence from the ACTION Registry–GWTG showing that, at some US institutions, upwards of 20% NSTEMI patients with left main or three-vessel disease receive medical treatment. “These are not all patients who are super elderly, decrepit, and don't want anything done,” Kirtane said. “These are often patients that people feel uncomfortable treating because they are high risk and [the clinicians] may not have the skills or the ability to do it. They don't refer them, and they just treat them medically. So that's a problem.”

We can do amazing things, we just have to figure out who the right patient is. Ajay Kirtane

Similarly, he commented, coronary disease is “woefully underdiagnosed” among heart failure patients and also data from the PINNACLE registry have shown a discordance with how accurate physicians think they are at identifying angina and reality.

CHIP is not a device, Kirtane stressed. “It's a concept of treating higher-risk patients that have an indication for revascularization [and] are not going to be offered surgery,” he said. “We actually talk about surgery in the CHIP manuscript as well as a very, very viable option. There's nothing wrong with surgery. In fact, in many patients it's lifesaving and that's where the data is.”

But just because one can operate—either surgically or percutaneously—doesn’t mean that one should, he said. “We can do amazing things, we just have to figure out who the right patient is,” he said. Presenting a case example of an 88-year-old woman with NSTEMI, heavily calcified and diagnosed during pneumonia, Kirtane explained that the care team ultimately chose the medical therapy route because it was the best choice for the patient.

Case volume is another issue that is especially important in CHIP because volume-outcomes relationships become even more apparent in higher-risk patients. “In the United States, annual PCI volumes are really bad. So how do you treat these really complicated patients if you don't have the training?” Kirtane asked, stressing that societies like SCAI should address this. “If you're performing fewer than 50 PCIs a year, then you either have to make things a lot safer or you should be referring these types of patients. This is not to be self-serving—this is what I’d want for my mom. If we can't practice with our patients how we'd want for our moms, it's a bit of a problem.”

Finally, forthcoming research will allow the field of CHIP to grow, he said, citing the ongoing ECLIPSE trial, which is randomizing 2,000 patients to orbital atherectomy or conventional balloon angiography, surgical turndown registries, and a UK-based study of PCI versus medical therapy in heart failure patients. “We will have more and more of this coming forward,” according to Kirtane. “Ultimately the fundamental CHIP mindset [should be that] the indications for the case shouldn’t change just because the lesion is hard to treat. That’s where risk/benefit comes in. Just like we have to identify the patients these therapies are being underused in, we have to be really cognizant of the risks and not overuse certain technologies, certain procedures . . . so as to manifest the best outcomes for patients in the end.”

Following the presentation, Rao asked, provocatively: is the field training too many interventionalists? “I think so, yeah,” Kirtane replied. “Other societies have addressed this and really curtailed enrollment in programs in training. I love training fellows. It's one of the best things that we do throughout our career, but it’s terrible to send people out to jobs where they are doing not enough volumes to be able to do it well.”

Higher Risk of Intracranial Hemorrhage With Aspirin in Primary Prevention 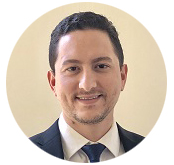