Is ruling out heart attack the chief goal in the emergency department? Or do the added benefits of a broader diagnosis justify a CT imaging strategy? 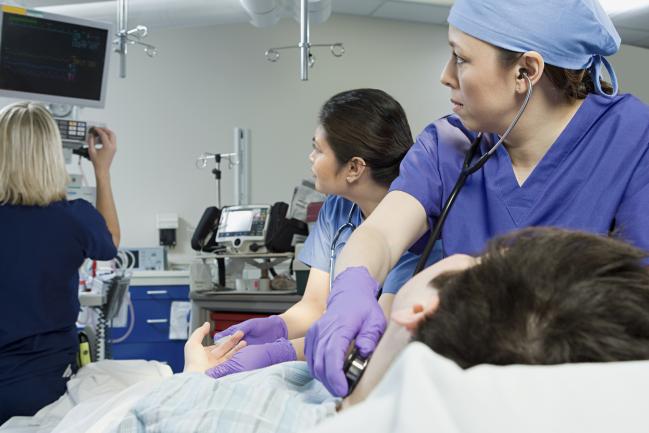 For patients presenting to the emergency department with acute chest pain but negative biomarkers for MI, assessment with stress echocardiography is safe and associated with fewer hospitalizations and shorter lengths of stay compared with coronary CT angiography (CTA), according to new randomized data. What’s more, major cardiovascular events over the long term were no different between groups.

The findings challenge the enthusiasm that has positioned the newer imaging modality as the test of choice when it comes to safely triaging patients with chest pain in the emergency room, authors say.

Coronary CTA “is kind of the champion” when it comes to ruling out coronary disease in this population, whereas the often cheaper and faster stress echocardiography is “the forgotten stepchild,” lead study author Jeffrey Levsky, MD, PhD (Montefiore Medical Center and Albert Einstein College of Medicine, New York, NY), told TCTMD. “A lot of cardiologists that practice stress echo are not so excited about it. They don’t feel that it’s a very sensitive test.”

More patients sent for coronary CTA were hospitalized at presentation—the study’s primary endpoint—compared with those randomized to stress echo (19% vs 11%; P = 0.026). For patients discharged without being admitted, median time in the ER was longer in the CTA group than in the stress echo group (5.4 vs 4.7 hours; P < 0.001). Likewise, for hospitalized patients, length of stay was longer for those triaged with the former test (58 vs 34 hours; P = 0.002).

Importantly, there were no differences in coronary catheterization rates between the study groups, but four patients in the coronary CTA arm were referred for CABG compared with none imaged with stress echo. There were also more lipid-lowering medications and beta-blockers prescribed in the coronary CTA cohort.

Over a median 24 months of follow-up, the incidence of major adverse cardiovascular events was similar in the coronary CTA and stress echo arms (11 vs 7; P = 0.47). Also, mean complete initial workup radiation exposure was higher for coronary CTA than for stress echo (7.7 vs 0.96 milliSieverts; P < 0.001).

‘Stress Echo is Not Unreasonable’

These findings have overall implications for how patients are managed when they come to the ER with chest pain, Levsky said. Sometimes it feels like “we’re in a tremendous rush to kick people out of the ER, and it is true that there is a problem with congestion of ERs and there is a problem with resources that are allocated to watching these patients. . . . But there is something to be said also for observing the patient over time with blood tests, etcetera, which is the tried and true, that sometimes answers these questions and sometimes the clinical diagnoses present themselves.

“The reality is we’re moving in this direction to try to speed-process patients, and that is not always, I think, in their best interest. There’s no substitute for knowing some more about the patient, and getting to understand them a little better,” he continued. “When you decide you want to know a lot about the patient because they really merit it, I think CT has a great deal to offer in that area, but in some patients when you haven’t made that decision, [you] don’t need to have a picture of everything in their thorax, [and] stress echo is not unreasonable.”

In an editorial accompanying the study, Pamela Douglas, MD, and Melissa Daubert, MD (Duke Clinical Research Institute, Durham, NC), write that “a safe and efficient triage strategy for patients with possible acute coronary syndrome is highly desirable, but taken together, the evidence suggests that no one test is best for evaluating all, or even the majority, of the 8 to 10 million patients presenting to the emergency department each year with acute chest pain.”

Rather, “different tests yield different diagnostic information and their value depends on a multitude of factors,” they continue, including goals of testing, individual risk factor profiles, patient preference/ability, test availability and local expertise, and safety.

“As medicine moves away from a ‘one size fits all’ approach to one characterized by personalized decision-making based on multiple data sources, perhaps imaging should follow suit,” Douglas and Daubert conclude. “To do this we need to move past the polarizing and overly simplistic anatomic versus functional debate to develop and adopt the principles of ‘precision testing.’”

A lot of patients that come with chest pain have a very low risk profile and we still feel in some way obligated to do a test on them whether for medicolegal reasons, to please the patient, to please the referring doctor who sent them to the ER, whatever it is, we still feel a need to do that in clinical scenarios that may be filled appropriately by stress echo. Jeffrey Levsky

Commenting to TCTMD, James Min, MD (Weill Cornell Medicine/NewYork-Presbyterian, New York, NY), said the editorial was “spot on,” and echoed the fact that testing efficacy will differ based on center expertise. “If you have expertise in CT or echo, then you should probably do the one that you’re good at rather than the one that you're not,” he said.

Levsky also agreed with this notion, especially for patients who present at night or on the weekends when test expertise and availability may be especially lacking. However, those who think that CTA is “special” and the only test that can be used early “should think about that twice,” he said. “They should also think about radiation dose a little bit. A lot of patients that come with chest pain have a very low risk profile and we still feel in some way obligated to do a test on them whether for medicolegal reasons, to please the patient, to please the referring doctor who sent them to the ER, whatever it is, we still feel a need to do that in clinical scenarios that may be filled appropriately by stress echo.”

In contrast to what Levsky said about CT being the “champion” for assessing patients in the ED, Min argued that “CT is still considered a generally new imaging modality” and is not widely used among US hospitals. Its potential added advantage, however, is in the detection of subclinical coronary atherosclerosis, “because what the outcomes data would support is that identification of that disease matters a lot.”

The increased use of primary prevention medical therapy in the CTA arm of the study was “presumably because they saw atherosclerosis and were acting upon it,” Min said, adding that it would be nice to see longer-term follow-up in these patients to determine the effect of identifying and treating early atherosclerosis.

“The real, interesting questions that still need to be answered are how can you convince people that they don't need a test or doctors that they don't need a test, and should they be satisfied with that?” Levsky asked. “Should there really be a ‘door prize’ when you show up in the ER with chest pain—that you should get some kind of imaging? A lot of doctors practice that way.”

But if patients don’t get imaged in the ER and are sent home after a negative blood test, they will likely be imaged 2 weeks later at a follow-up appointment, he noted. “I say we should image some of them up front because you don't really need to wait to find out the answer,” Levsky said. But, “if you have a way to know that certain people really don't need imaging, if it is a high-sensitivity troponin assay or other test, and they are not going to need imaging in a year or 2 years either, then that's fantastic.”

There are also times when patients are having chest pain for noncardiac reasons like pulmonary embolism, rib fracture, and pneumothorax, and CT provides an unexpected diagnosis, he observed. “That's a major benefit for when you don't know what's going on with the patient and you have a wide differential in your mind, but it's a detriment in some patients because it sends us up wild goose chases in some cases . . . They end up with three more tests down the line to only figure out that the finding has nothing to do with their acute symptoms.”

For Min, the potential benefit of finding subclinical atherosclerosis with CT outweighs both the radiation risk and the possibility of finding nothing. “All of the outcomes evidence, both the randomized trial evidence as well as the large-scale observational registry evidence, supports that primary prevention medical therapy really does save these people's lives,” he said.

VTE Risk Higher in Surgical Patients Who Get Transfusions

Among African Americans in Need of LDL Lowering: Less Statin Use, More Distrust of Doctors